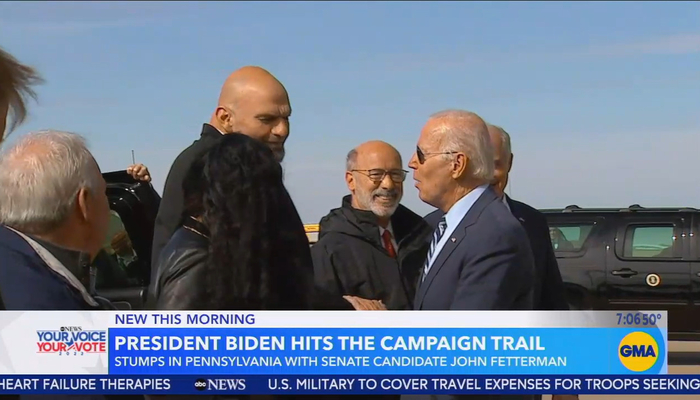 “Many Democratic candidates have been hesitant to campaign with President Biden, given his low approval ratings,” Scott acknowledged, contrasting Democrats’ decision to hide Biden with former President Trump’s many rallies four years ago: “Donald Trump held 26 rallies in October 2018. Barack Obama, 16. But Biden has been largely absent from the campaign trail, trading public campaign rallies for big dollar fundraisers behind closed doors.”

This ongoing embarrassment for Democrats went unstated on CBS and NBC Friday morning. In their supposedly “hard news” first half hour, CBS Mornings instead carved out time for a long-range winter weather forecast (cold), while NBC’s Today chose to regale viewers with the highlights of Thursday night’s football game.

Still, while ABC at least talked about the President’s problems, Scott neglected to mention Fetterman’s ongoing health problems which have put the race in peril for Democrats, and showed no clips of Fetterman speaking. Nor was a word said about Fetterman’s extreme left-wing views on issues like abortion, where he opposes any restrictions. Citing polls compiled by FiveThirtyEight, Scott said Fetterman was “running about 4 points ahead of his Republican opponent, TV personality Dr. Mehmet Oz.” But she failed to say that this lead has eroded significantly from a month ago (an 8.9% lead for Fetterman back on September 21, vs. just 4.4% now), even while polls in the governor’s race remain stable.

If the Pennsylvania Senate race does wind up in the Republican column, Scott warned viewers: “Their odds of flipping the Senate go from 41% to 75%.”

To see the relevant ABC transcript from October 21, click “expand.”

CECILIA VEGA: We’re going to turn now to the midterms, just 18 days away, and President Biden did something we haven’t seen much of so far this cycle: He made a rare campaign stop in front of the cameras joined by a candidate. He was in the battleground of Pennsylvania, which could very well determine who controls the Senate. Rachel Scott has been covering this election every step of the way, and she joins us right now from the White House. Good morning, Rachel.

RACHEL SCOTT: Hey, Cecelia, good morning, and you know this well — many Democratic candidates have been hesitant to campaign with President Biden, given his low approval ratings. But right there in Pennsylvania, a rare campaign appearance.

JOE BIDEN: So this law is about more than rebuilding infrastructure. It’s about rebuilding the middle class, something John knows a lot about and talks a lot about.

SCOTT: Fetterman, Pennsylvania’s lieutenent governor, is locked in one of the most important Senate races in the country. Running about 4 points ahead of his Republican opponent, TV personality Dr. Mehmet Oz. Most Americans disapprove of President Biden’s job performance, including in battleground Pennsylvania, where he won by more than 80,000 votes. Some Democrats have made it a point to distance themselves.

REP. TIM RYAN (Ohio Democratic Senate candidate): I want to be the face of this campaign. I’ve done this for 18 months. We’ve done it on our own.

REPORTER: Mr. President, is your party going to hold the Senate? VEGA: Pennsylvania, oh so crucial. 18 days, Rachel. Thank you, so much.

Peru’s left-wing president tried to dissolve Congress and was impeached and arrested instead
Joe Biden to Announce 2024 White House Bid After Holidays
Warnock Is Just as Weak a Candidate as Walker
‘I am not a criminal’: NHL All-Star speaks out against latest Canadian gun ban
Delta pilots would get more than 30% in pay raises under new contract deal