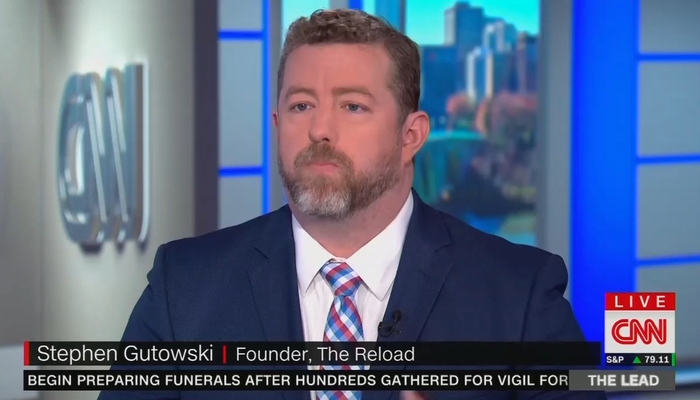 On Wednesday, CNN announced they’ve hired Pro-Second Amendment reporter, founder of The Reload, and MRC Bulldog Award winner Stephen Gutowski as an analyst, a move many see as a sign of new CNN boss Chris Licht’s commitment to a more moderate journalist product. But while the hire was celebrated on the right and among those who appreciate Gutowski’s work, there were portions of the liberal media that couldn’t handle the alternative perspective and lashed out, giving voice to nastiness.

In their press release, CNN touted Gutowski’s experience and how he’s been featured in a wide range of publications, both right and left alike (Click “expand”):

The Reload founder Stephen Gutowski has been writing about guns and politics since he founded his first publication back in 2009. Before that, he spent almost seven years as a staff writer at The Washington Free Beacon. His work has also been published by The Atlantic, The Dispatch, National Review, Ammoland, and The Washington Examiner Magazine. His reporting has been featured in publications including CNBC, Fox News, The New York Times, Bearing Arms, The Washington Post, NPR, The Drudge Report, ABC News, and many more. Gutowski was the only journalist to be featured on the cover of Time Magazine’s “Guns in America” edition.  Gutowski has won multiple awards for his reporting over the past several years. His work on the show Range Time With Stephen Gutowski received two Telly Awards alongside offerings from publications like CBS News and The Wall Street Journal. He was named Journalist of the Year by the Second Amendment Foundation in 2016 and most recently received the 2020 Bill of Rights Award from the Citizens Committee for the Right to Keep and Bear Arms.

Gutowski is one of three hires for CNN’s new “’Guns in America’ Beat and Team.”

“THIS is who CNN just hired as a commentator on guns… Someone who was awarded gun lobby ‘reporter of the year,’ who was a regular guest on the NRA’s extremists [sic] NRATV outlet, and friend of Dana and Chris Loesch…” Watts shrieked in one tweet.

Responding to Watts, Guttenberg claims the hire has shaken his faith in CNN and he’ll question making further appearances on the network, despite making an appearance on Wednesday after the announcement of the hire.

I just left @CNN having done an interview with @ErinBurnett. I wish I would have seen this before the interview. I will reevaluate future interview requests. This is truly upsetting. https://t.co/CcYpuUBvij

“He is a gun industry shill hired by @CNN as a paid correspondent on guns. CNN, my bias is saving lives. You can hire me as your gun correspondent.  I will do it for free, or a donation to a cause,” he whined in another tweet.

Left-leaning outlets like The Wrap used Watts’s tweets as the backbone of their reporting on Gutowski’s hiring. “CNN announced their newest hire Wednesday, and it’s being met with its share of backlash from the left,” wrote Loree Seitz in a poorly researched article titled “CNN Slammed for Hiring NRA-Approved ‘Gun Nut’ Stephen Gutowski as Firearms Reporter: ‘Paychecks for the Price of Innocent Lives.’”

Instead of researching Gutowski, Seitz was lazy and relied on regurgitating tweets from nobodies on Twitter:

This sentiment was echoed by many others, with one user saying the hire was like getting “paychecks for the price of innocent lives,” considering his approval rating from the NRA. Another user tweeted “CNN hires gun nut for gun analysis,” while others insisted Gutowski’s hire would end their CNN viewership. “No thanks @CNN,” one user wrote. “I will not be watching ANY of your programs. NONE.”

Simple research shows that Gutowski is not an “NRA-approved” reporter. In keeping with The Reload’s mission of “sober, serious reporting,” he has reported on the NRA’s rather embarrassing internal turmoil including the New York State lawsuit against the group and the battle for control of their finances when they faced bankruptcy, their drop in revenue, their plummeting attendance, and the internal pressure on EVP Wayne LaPierre to resign.

All of these are stories the NRA would prefer not to see the light of day.

But while The Wrap was busy falsely accusing Gutowski of being on the take from the NRA, they overlooked the fact that included in CNN’s batch of hires was Jennifer Mascia. And as CNN’s announcement notes, “Mascia is a senior news writer and founding staffer at The Trace, a nonprofit outlet focused exclusively on gun violence that launched in 2015.”

So while The Wrap was intent on framing Gutowski as the one bought and paid for by special interest activists, it was the anti-gun reporter.

“I’m going to be a subject matter expert, not a commentator. So, don’t expect to see me in many heated debates or going up against your favorite or least-favorite opinion personality,” Gutowski wrote to his readers on The Reload. “Do expect me to do my best to fairly and accurately describe gun policy and politics debates. And please hold me to that expectation.”