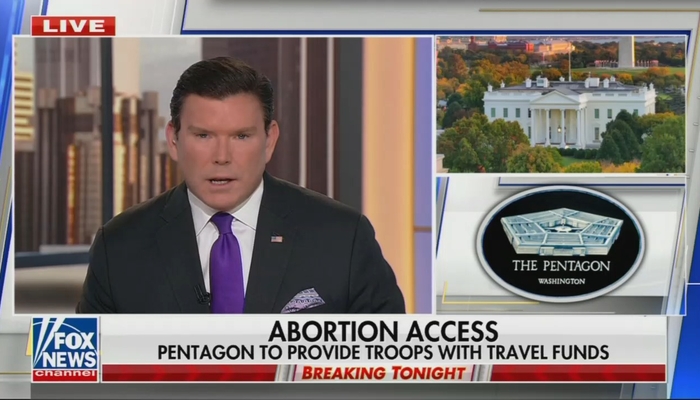 On Thursday, The Daily Signal’s Mary Margaret Olohan reported that the Department of Defense had announced that it will pay for service members to travel to abort their unborn babies. Between this and Wednesday’s report that the State Department is now funding drag shows overseas, it’s obvious the Biden administration has its priorities completely backward. Of course, just like Wednesday night, the big three evening newscasts ignored the latest example of the Biden administration wasting taxpayer money funding degeneracy and baby killing.

Instead of covering this appalling story of the Pentagon funding abortions for service members and this families, ABC’s World News Tonight, CBS Evening News and NBC Nightly News decided to cover a friviolus civil rights lawsuit over the Jackson Mississippi water crisis, a Princeton University student who was found dead in New Jersey, and a report on why some people get bitten by mosquitos more than others.

According to The Daily Signal, the Pentagon memo outlining their plan to fund abortions states: “travel and transportation allowances for Service members and their dependents, as appropriate and consistent with applicable federal law and operational requirements, and as necessary amend any applicable travel regulations, to facilitate official travel to access non covered reproductive health care that is unavailable within the local area of a Service member’s permanent duty station.”

The memo also states that it will “develop a program to reimburse fees for those Defense Department health care providers who ‘wish to become licensed in a different state than that in which they are currently licensed” according to The Daily Signal.

This means that those who want to carry out abortions in other states will be able to do so while being paid by the Pentagon.

Secretary of Defense Lloyd Austin stated that the order be implemented “as soon as possible,” with a deadline by the end of the year.

“There is no higher priority than taking care of our people, and ensuring their health and well-being. The Department of Defense will continue to closely evaluate our policies to ensure that we continue to provide seamless access to reproductive health care as appropriate and consistent with federal law,” Austin wrote speaking like a leftist.

This bias by omission by the three networks was made possible by Verizon on ABC, Simplisafe on CBS, and Liberty Mutual on NBC. Their information is linked.