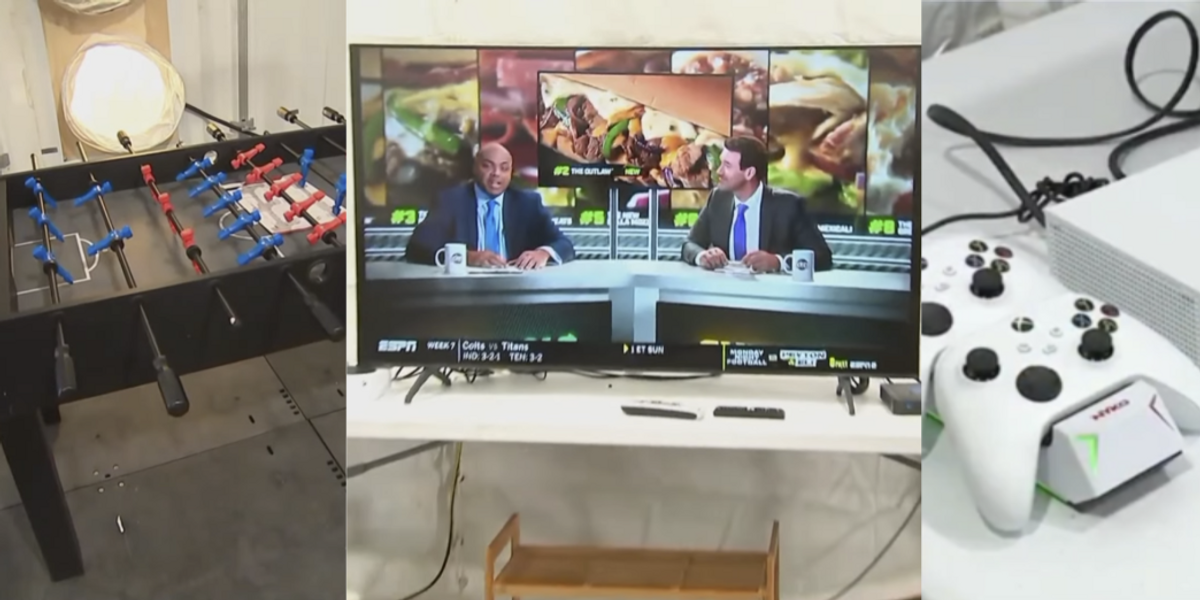 To deal with the busing of migrants, New York City has opened a migrant tent city on Randall’s Island. The tent city can accommodate 500 migrants, but can be expanded to have 1,000 beds.

The facility is intended to house migrants temporarily – between 24 to 96 hours. However, there is no limit as to how long the men can stay at the center.

“Our focus is to get you where you want to go and not put a numerical limit in terms of number of hours to restrict anything,” said Dr. Ted Long, a senior vice president at NYC Health + Hospitals.

The migrant city boasts a long list of amenities for the tenants.

There are couches and coffee tables situated in front of big-screen TVs with cable and the latest Xbox video game console. The New York Post reported that there is a recreation room with two popcorn machines, ping-pong tables, foosball tables, and board games.

Illegal immigrants also have access to free Wi-Fi, a bank of 12 phones that can be used to make international calls, and laundry service.

There are coffee and tea stations available around the clock, as well as 24-hour snacks.

The facility provides 60 dining tables. Meals will be cooked on-site in the fully equipped commercial kitchen.

“Those meals are all culturally appropriate. It is South American fare,” said New York City Emergency Management Commissioner Zach Iscol during a press conference. “The menu rotates on a regular basis.”

Iscol added, “This is a place people can come, rest, relax, and kick their feet up after the journey they have been on.”

The migrant facility will have 24/7 security and a 10 p.m. curfew for tenants.

Iscol admitted that the relocation was a pricey mistake.

However, Iscol did not reveal the total cost of the illegal immigrant facility for single men.

The New York Post reported last month that the Bronx tent city would cost the city $15 million per month to operate.

In addition to the tent city, the New York City government is housing 200 families at the Row Hotel – a 4-star hotel in midtown Manhattan.

According to online travel booking websites, nightly rates at Manhattan’s Row Hotel start at $116 and go all the way up to $539 per night.

Since the spring, more than 18,000 migrants have been bused into New York City from southern border states. Earlier this month, New York City Mayor Eric Adams declared a state of emergency because of the influx of illegal immigrants.

Elon Musk Should Tell EU Censors to Get Lost
Video: Fugitive hiding under mattress opens fire on cops who were searching for him. It doesn’t end well for suspect.
Senate Advances Radical Respect for Marriage Act
Tom Hanks is selling coffee for a good cause
Kim Kardashian breaks her silence on Balenciaga controversy, says she’s ‘disgusted and outraged’