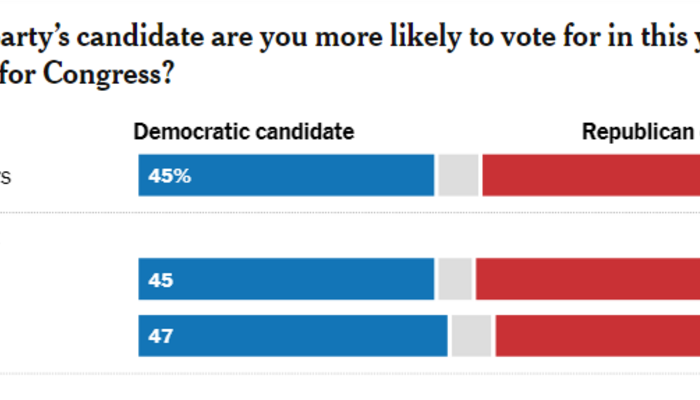 The New York Times has released what may be its last major poll before the 2022 elections, and it shows potential good news for the Republican Party. In the latest Times/Siena survey, which the paper featured prominently on the front page under the Monday headline “G.O.P. Gains Edge in Poll As Economy Sways Voters,” the Republican Party erased a one-point deficit against the Democrats in September for a four-point advantage (with a margin of sampling error of 4.1%), with the election less than a month away and early voting having already begun in 15 states.

Concerns about the economy and inflation during the Biden administration is tilting the public toward Republicans as the November elections approach. Conversely, supposedly Democratic issues like abortion, gun control, and Trump-phobia are not helping Democrats. (Perhaps surprisingly, the coronavirus was a minute factor in the public mind.)

Even the much-vaunted disadvantage among women for Republicans has disappeared, with women splitting their preference 47percent – 47 percent. It’s now Democrats who have the gender gap, at least among men.

Goldmacher established the lay of the land:

Republicans enter the final weeks of the contest for control of Congress with a narrow but distinctive advantage as the economy and inflation have surged as the dominant concerns, giving the party momentum to take back power from Democrats in next month’s midterm elections, a New York Times/Siena College poll has found.

The poll shows that 49 percent of likely voters said they planned to vote for a Republican to represent them in Congress on Nov. 8, compared with 45 percent who planned to vote for a Democrat. The result represents an improvement for Republicans since September, when Democrats held a one-point edge among likely voters in the last Times/Siena poll….

With inflation unrelenting and the stock market steadily on the decline, the share of likely voters who said economic concerns were the most important issues facing America has leaped since July, to 44 percent from 36 percent — far higher than any other issue. And voters most concerned with the economy favored Republicans overwhelmingly, by more than a two-to-one margin.

Goldmacher had to admit:

The survey showed that the economy remained a far more potent political issue in 2022 than abortion.

So much for the Times’ previous idea that new abortion rules across the country, in the wake of the Supreme Court’s overturning of Roe v. Wade, would be a magic bullet for the Democrats to escape what had looked like an electoral wipeout in November.

Instead, economic issues like inflation remain by far the chief concern of voters, suggesting that the culture wars, wokism, and identity politics encouraged daily by the paper may have put the Democratic Party on the path to defeat.

Elon Musk calls New York Times ‘lobbying firm for far-left politicians’ after paper apparently ran no story about ‘The Twitter Files’
Tesla is still dominant, but its U.S. market share is eroding as cheaper EVs arrive
New book says being a sports fan is good for your mental health
Man thrown over the side of a bridge after Chargers game in wild incident caught on video says his attacker has still not been arrested by police
It Pained Poor Mika To Praise Pence For Criticizing Trump On Fuentes Dinner