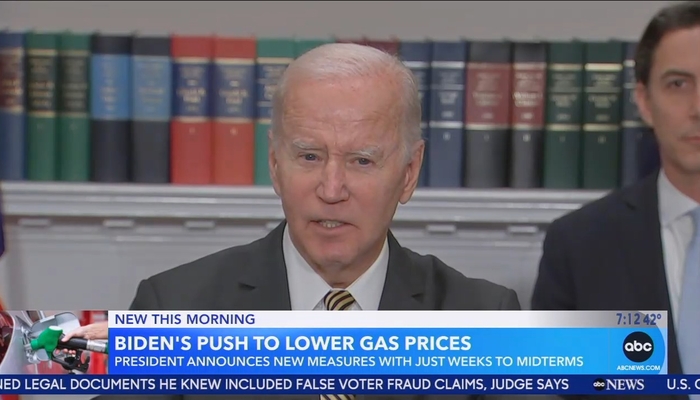 For yet another day, the “big three” of ABC, CBS, and NBC used their Thursday morning news shows to fluff the White House up in their hapless attempt (which some argue is purposeful) to save their party’s midterm prospects and lower gas prices through a puny release from the Strategic Petroleum Reserve (SPR).

ABC’s Good Morning America again played the starring role, offering praise akin to what you see on state-run media in authoritarian countries. Co-host Michael Strahan had this embarrassing tease: “Gas price push. President Biden taking action to ease the pain at the pump. What he says could come next as he gets set to hit the campaign trail ahead of midterm elections.”

Later, Strahan introduced the segment as if Chief of Staff Ron Klain had told him what to say: “We’re going to turn now to President Biden’s push to lower gas prices including releasing millions of barrels of oil from the nation’s strategic reserves.”

Chief White House correspondent Cecilia Vega conceded Biden’s ploy was political: “President Biden says this has nothing to do with politics. But…every official inside the White House behind me knows exactly how these rising gas prices could impact the outcome of midterms and frankly the President’s agenda.”

Vega promptly put that aside and highlighted the SPR release and Biden’s promise to replenish it in the future though she ended with the reality that Americans are paying “nearly…50 cents” more per gallon for gas than a year ago.

They both came back for more in the 8:00 a.m. Eastern hour, including Strahan with his pathetic tease.

NBC’s Today co-host Hoda Kotb sounded like Strahan when she teased a midterms report on Biden in a positive light: “On the road. President Biden hits the campaign trail today in the closely watched battleground of Pennsylvania. Can he move the needle for undecided voters with less than three weeks to go?” White House correspondent Kristen Welker said “there’s a lot of concern about gas prices which have ticked up a bit over the past month” before hilariously claiming “it’s not clear” if the SPR release “will have a big impact on gas prices.”

She added that it does give Biden a political talking point to insist he cares about struggling Americans. Better yet, the proof she presented was clownish: “I talked to the White House chief of staff Ron Klain. What’s the first thing he does every morning? Check gas prices”.

Talk about being stenographers for power.

Co-host Savannah Guthrie pivoted to abortion, fretting “Democrats thought they had a lot of momentum” over the summer, but it’s since evaporated.

Welker responded that’s been seen in polling and proof “Democrats are concerned that they need to be having broader appeal.” Again, all talk about what Democrats need to do and nothing about Republicans winning voters.

GUTHRIE: The polls have shown that the Republicans appear to have some momentum going into this midterms. The control of the Senate, control of the House is on the table. Pennsylvania, where the President will be today, is a key Senate race. And it’s tight.

WELKER: It’s very tight. It’s basically a statistical dead heat, Savannah. And what’s notable about the President’s stop in Pennsylvania today, he’s going to be talking about infrastructure. Here you can see the polls between John Fetterman and Dr. Oz. He’s going to talk about infrastructure and then hold a fundraising event with John Fetterman. So, not the typical rally that you would usually see a President hold in these closing weeks of a campaign. Why? Well, his approval ratings are low and I think a lot of Democrats are concerned that he will — he will hinder them instead of helping them. And so, that’s why I think you’re not seeing these traditional rallies. But I spoke to an administration official who said, look, the bottom line is we think it’s more effective to have him out talking about things like infrastructure, taking about things like abortion, gas prices, and the things that he has worked on instead of basically shouting at a crowd. They point to Obama, they point to Trump. They say, look, they had big losses in their midterms as well, so they don’t necessarily see that as an effective strategy. They’re also saying he will be holding typical events getting closer. Biden campaigns for Democrats today in Pennsylvania. It’s one of the few places where candidates actually want his support. The latest CBS News polling shows that control of the Senate remains a tossup today, and the race in Pennsylvania could decide it.

JIANG: From gas prices to new jobs and abortion, this week President Biden is going all in on those issues. When asked Wednesday about his focus going into the election, he said there are multiple issues at play.

BIDEN: All important. Unlike you, there’s no one thing.

JIANG: Today, the President is heading to Pittsburgh to tout the billions of dollars he signed into law for rebuilding the nation’s infrastructure.

Jiang followed NBC’s suit in wrapping with the Pennsylvania Senate race, but she did mention how Fetterman’s poor health has been a major factor.

Unfortunately, she touted a doctor’s letter from Fetterman “say[ing] he is recovering well with no work restrictions,” but ignored the fact that said doctor is a donor to his patient’s campaign.

If this were Donald Trump, it’s certain Jiang would have tucked that in.

Wednesday’s state-run media reports were brought to you by advertisers such as Carmax (on ABC), Honda (on NBC), and Humana (on CBS). Follow the links to see their contact information at the MRC’s Conservatives Fight Back page.

To see the relevant transcripts from October 20, click here (for ABC), here (for CBS), and here (for NBC).