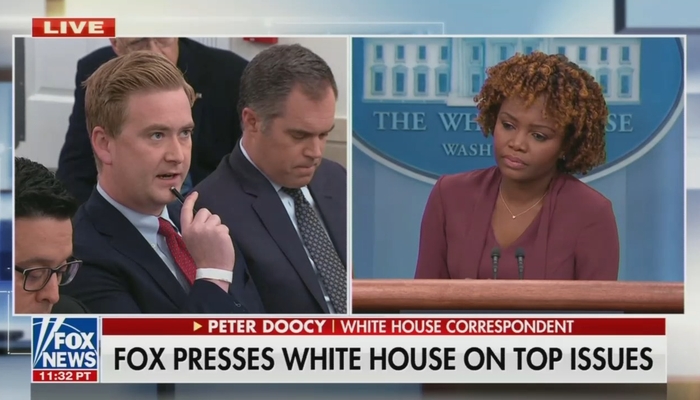 In only the fourth White House press briefing this month, Press Secretary Karine Jean-Pierre faced a litany of questions Tuesday about the left’s fixation on abortion (instead of crime or the economy).

As we’ve come to expect, Fox’s Peter Doocy and Real Clear Politics’s Philip Wegmann turned up the heat with Doocy asking if the White House is more concerned about abortions than struggling Americans and Wegmann wondering whether President Biden supports an limit on abortion.

CBS News Radio’s Steven Portnoy set the table by asking Jean-Pierre how many more Senate Democrats Biden needs “to codify Roe” and, after Jean-Pierre repeatedly ducked, he instead asked if abortion would be Biden’s “top legislative priority in” 2023.

Jean-Pierre ducked, accusing him of engaging in “hypotheticals.” Portnoy pressed one last time by wondering if this abortion focus means it’s already his top issue, Jean-Pierre said Biden has “show[n]…how important Roe is to him, how important reproductive rights is because a majority of Americans believe that this right needs to stand.”

This gave Doocy the opening to inquire if abortion is more important than the economy: “[W]hat is President Biden’s top domestic priority now? Is it inflation or is it abortion?”

Jean-Pierre promptly stepped in it: “The President’s going to continue to talk about issues that matter to the American people and abortion is one of them. A majority of the American people disagree with the decision that — that the Supreme Court made the Dobbs decision….When it comes to the economy…it is the — his number one economic priority”.

Doocy picked up on Jean-Pierre’s description of inflation only being “his number one economic priority.” And when she suggested Biden has created a roaring economy, Doocy fired off a scorcher on how could that be the case when Bloomberg said a recession is indisputable (click “expand”):

DOOCY: We’ve heard the President say inflation is his top domestic priority, but now he’s saying, come next year, his first bill would be abortion-related. So, is his number one domestic priority abortion or is it inflation?”

JEAN-PIERRE: Well, let’s forget what the President has done the last 19 months. He has made the economy his top priority. He has passed the American Rescue Plan — by the way, as you heard me, say all the time, no Republicans voted for that in Congress — and it was a plan that helped us get back on our feet with the economy that helped us gain or create 10 million jobs that we had lost. It also put money in people’s pockets. It also make [sic] sure that businesses were — were — were able to open up schools, were able to open up. People were able to go back into their homes — save their homes. And so, that was the American Rescue plan. There’s the bipartisan infrastructure legislation, which was, again, to invest in ports. Invest in the infrastructure that was dwindling. And so, that is something that he did. The Inflation — Inflation Reduction Act that is lowering cost for the American people. He is working on the economy every day. I just announced yesterday — or we just announced yesterday hearing aides. 30 million people are going to benefit from hearing aides saving thousands of dollars a year. So, that’s working on the economy every day.

DOOCY: So you said he’s been working on the economy every day for 19 months. Now, Bloomberg economists are forecasting a 100 percent chance of a recession. So, how is it that we can be barreling towards a recession and the economy is, as the President says, strong as hell?

Doocy wrapped with a zinger on Biden’s use of releases of oil from the Strategic Petroleum Reserve (SPR) as a crutch: “[I]f President Biden keeps going to the petroleum reserves when there are energy problems, is he giving up on his campaign pledge to end fossil fuel?”

Predictably, Jean-Pierre blamed oil companies for high prices: “There is no shortage of opportunities or incentive for oil companies to ramp up production. We’ve made that clear. Oil companies are ranking in record profits”.

Later on, it was Wegmann’s turn. Wegmann pulled a thread on something Doocy pressed Jean-Pierre on during September 23’s briefing.

Based on Biden’s speech earlier in the day calling for Congress to “codify Roe,” Wegmann asked whether it’d “simply codify Roe or would it go further and overturn individual state abortion restrictions” and then, personally, “are there any restrictions at all that the President would support.”

Jean-Pierre offered a predictable non-answer that he wants to codify Roe and protect what was a “constitutional right for almost 50 years.”

The usually even-keeled Wegmann clapped back that she “didn’t answer either question” (click “expand”):

WEGMANN: [T]hat didn’t answer either question. There’s — first of all, there are individual state restrictions on abortion in the — on the books currently around the country. Some of those existed before the Dobbs case, before the overturning of Roe. Would the President, with this bill, codify Roe, does he want that bill to go farther and over —

JEAN-PIERRE: I just — just answered that question. He believes —

JEAN-PIERRE: — he — I just answered that question. He believes in Roe and how it stood before the Dobbs decision.

WEGMANN: Okay, and then on the individual restrict — are there any restrictions whatsoever that the President would support when it comes to abortion?

JEAN-PIERRE: He — again — he believes in the provisions that Roe had and that’s where he stands. I would suggest you reading it, so you get a sense what the President stands [sic] and what he wants to see.

Roll Call’s Niels Lesniewski followed up after Wegmann and suggested the administration release the legislative text of what they’d want Congress to pass seeing as how the Women’s Health Protection Act “was broader than — than what I believe you’re talking about now.”

Back on Wegmann, he pressed Jean-Pierre about why Biden would be “talking about nuclear Armageddon behind closed doors to political donors two weeks ago rather than speaking directly with the American people about that topic.”

Jean-Pierre scoffed at this concern and said there were reporters present and thus it wasn’t said “in secret.”

To see the relevant transcript from October 18’s briefing (including two excellent questions on the SPR from Bloomberg’s Jennifer Jacobs), click here.