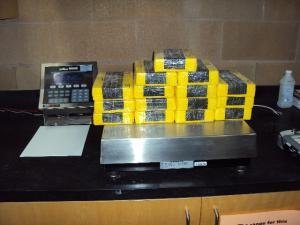 At approximately 12:30 a.m., Border Patrol agents assigned to the Murrieta Station encountered a silver sedan with two occupants inside. At the time of the encounter, the vehicle was parked at a gas station near the I-15 westbound Barstow Road off-ramp.

After a brief conversation with the individuals, agents discovered multiple bundles concealed inside the vehicle’s trunk.  The bundles’ weighed approximately 35 pounds and their contents later tested positive for fentanyl. The narcotics have an estimated street value of $553,000.

The 23-year-old United States citizen male driver, a 31-year-old Guatemalan male passenger, and the narcotics were turned over to Homeland Security Investigations (HSI). The vehicle used to transport the fentanyl was seized by U.S. Border Patrol.

“I am proud to say that our San Diego Sector agents prevented these individuals from poisoning our communities,” said Chief Patrol Agent Aaron Heitke.  “These agents are responsible for over 50% of all fentanyl seized by the U.S. Border Patrol this year.”

Fiscal year to date, San Diego Sector Border Patrol agents have seized more than 1,000 pounds of the addictive drug, an approximate 200% increase over the previous year.