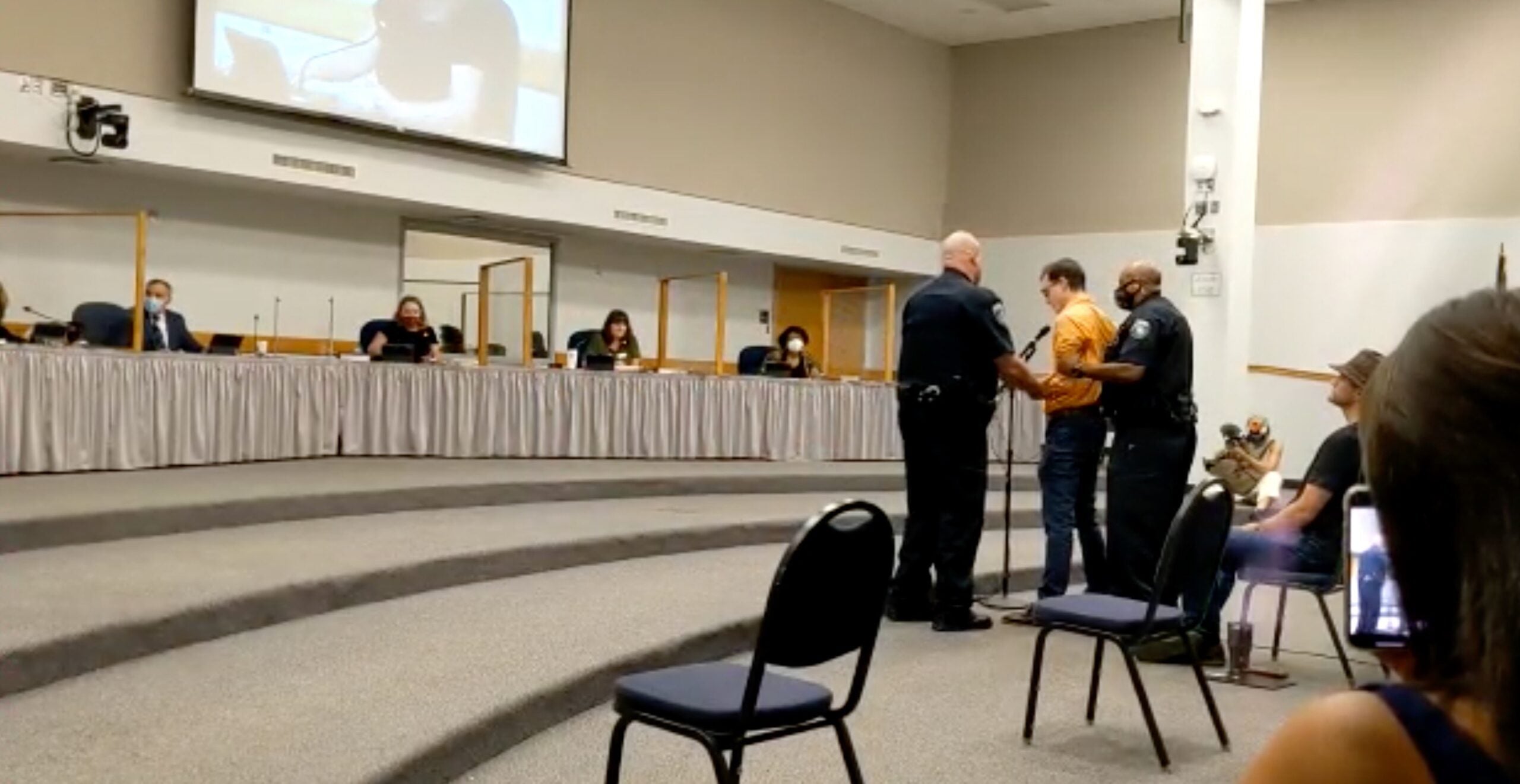 Shortly after he got arrested for speaking out at a school board meeting last year, a Texas father filed a grievance with the school board, which finally put that grievance on the agenda for a meeting last Thursday. Yet after the father waited for nearly four hours for the board to give his case a hearing, multiple members publicly recused themselves and the board declared it didn’t have a quorum to hear the issue.

“This belongs in a communist country, not in America,” Jeremy Story, a father of seven whose children attend or attended public schools in the Round Rock Independent School District, told The Daily Signal on Monday.

Story told The Daily Signal that the Round Rock school board dismissed his grievance in order to silence his concerns. Board President Amber Feller denied any such intention in her own remarks to The Daily Signal.

Feller insisted that the school district’s legal department—rather than the board president—schedules the hearing of grievances and that she has “no input” on such decisions.

However, another board member, Danielle Weston, countered Feller’s claim, insisting that the board president has authority over its meetings.

Police arrested Story on Sept. 17, 2021, on a misdemeanor charge of hindering proceedings by disorderly conduct. The charge dates to the previous Aug. 16, when Story raised concerns about Schools Superintendent Hafedh Azaiez, who at the time faced allegations of family violence in an application for a protective order (redacted version available here).

According to publicly available footage of the meeting, Amy Weir, then president of the Round Rock Independent School District Board of Trustees, warned Story not to speak about “something other than D1 or D2” on the meeting’s agenda.

Story responded: “I will show you how what I’m about to comment on is related to that.”

Weir twice interrupted Story, saying, “No, I do not want you to demonstrate … ” However, she agreed to let him speak. Yet as soon as Story said, “Our superintendent has a protective order … ,” Weir nodded to Round Rock school district police officers, who escorted Story out of the building.

Story, along with another Texas father, Dustin Clark, argues that Weir was intending to silence him. Weir categorically denied this claim.

Weir told Fox News that “there has never been an attempt to silence Mr. Story.” Following normal procedure, she said, Story wrote on a card indicating what he would say in the meeting, and he wrote that “unlike the board, citizens are not required to speak on items on the agenda,” indicating that “he was planning to speak on a topic not listed for the meeting.”

Story filed a grievance with the school board on Sept. 4, 2021. The board noted it as “filed” on Sept. 16, the day before police arrested Story.

Story referenced a “protective order” to discuss the claims of a woman who identified herself as Azaiez’s girlfriend from September 2018 to December 2020 and then from February to June 2021. In her application for a protective order, the woman claimed that when she told Azaiez that she was pregnant with his child, he demanded that she get an abortion. When she refused, she said, he assaulted her in her home, which put her in danger of miscarrying.

The woman also claimed that she overheard Azaiez “plotting” with Weir about hiding certain things from other school board members.

In a text message chain about the situation included in the application for the protective order, Azaiez wrote: “For the last time I am telling you please get an abortion[;] you don’t know what you are getting yourself into. I will make you pay this[,] you will not make me lose everything … Don’t make me go after you and make you pay the consequences for you and this baby.”

Mary Nix, the lawyer representing Azaiez, noted that “all applications for protective orders, including the one to which you refer, contain ‘allegations’ which are unproven and are not ‘facts.’”

“As I succinctly stated in a January 5, 2022 press release, we have objective evidence that the alleged assault, which is the genesis of this controversy, did not occur and we believe that evidence to be incontrovertible,” Nix said.

Story and Clark filed a federal lawsuit against the Round Rock school district in May, claiming that their First and Fifth Amendment rights were violated. Story told The Daily Signal that he and Clark are adding to the lawsuit as the story continues.

The agenda for the school board meeting last Thursday, Oct. 13, includes this item for a closed (non-public) session: “Pursuant to Texas Government Code Sections 551.071 and 551.074, the Board will discuss, deliberate and consider the public complaint filed by Jeremy Story.”

“This strengthens our federal lawsuit by once again demonstrating the ongoing trend and premeditated intent of these malfeasant five board members to silence the free speech rights of parents who are critical of the board,” Story told The Daily Signal.

“They egregiously stopped me from speaking lawfully a year ago, subsequently unlawfully catalyzed my arrest and jailing, and are now trying to keep me from my lawful right to have a hearing before them about their wrongful actions,” he said Monday.

Story said that Weir and Feller, along with board members Cory Vessa and Tiffanie Harrison, “have done this to cover up the unethical acts of a superintendent they unlawfully hired.”

“The board president does not set the agenda for grievances,” Feller told The Daily Signal in a phone interview Monday. She said grievances are “handled entirely by our legal department” and that “we don’t have anything to do with the scheduling of them.”

Yet the official school board policy appears to contradict this claim.

According to the “Local Policy” in Section BE of the Board Policy Manual, “The Board President May call special meetings” such as the meeting Oct. 13. The policy also states that board members must submit agenda items to the president in writing, and the president will approve or deny the request.

“Given the pending litigation Mr. Story has against some trustees, I was surprised at how poorly his grievance has been handled in many ways,” Weston, a board member, told The Daily Signal. “My observation is that, as our policies expressly indicate, the board president alone has the statutory authority to schedule board meetings and place items on the agenda.”

“In February of this year, an associate of Feller and Weir filed a grievance against me and the board heard it eight days later,” Weston added. “It remains a mystery why Mr. Story was made to wait 13 months to have his grievance heard.”

Feller also defended the board’s decision to retain Azaiez as superintendent, noting that the Texas Education Agency, the Travis County Sheriff’s Office, and an independent investigator with the school district each closed investigations of the superintendent.

The investigator, Ann Dixon, concluded that Azaiez could not be effective in his role.

“Based on my collective fact findings and understanding of the laws and rules of an educator in Texas, I did state Dr. Azaiez in my opinion could not come back into his position and be effective,” Dixon wrote March 8, about two weeks before the school board reinstated the superintendent.

“I believe that he has proven her wrong,” Feller said, arguing that Azaiez also has proved himself to be effective.

Neither the spokeswomen for the school district nor Nix, Azaiez’s lawyer, responded to The Daily Signal’s requests for comment by publication time.