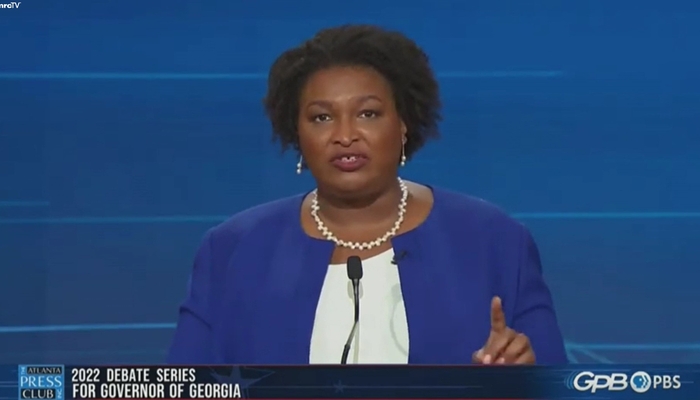 All three networks on Tuesday morning ignored the fact that Democrat Stacey Abrams is still flirting with election denialism, refusing to outright say that she would accept the results of the Georgia’s governor’s race, should she lose. Abrams debated incumbent Republican Brian Kemp on Monday night.

Here is the key part of her non-answer: “I will always acknowledge outcomes to elections but will never deny access to every voter. Because that is the responsibility of every American, to defend the right to vote.”

Abrams tried to rewrite her very clear history of election denialism. She began her answer by assuring, “In 2018, I began my speech on November 16 acknowledging that Governor Kemp had won the election. I then proceeded to lay out in grave detail the challenges faced by voters under his leadership as secretary of state.”

Yet, on April 4, 2019, she denied reality: “We had this little election back in 2018. And despite the final tally and the inauguration and the situation we find ourselves in, I do have one very affirmative statement to make. We won.” Even the liberal Washington Post chided, “A review of numerous interviews shows that Abrams subsequently used language denying the outcome of the election that she now appears to be trying to play down.”

In addition to not covering this part of the debate, only ABC’s Good Morning America offered a full report on Monday’s face-off in Georgia. While ignoring election denialism, reporter Rachel Scott said of Kemp: “Georgia Republican Governor Brian Kemp facing off against the Democrat he barely beat four years ago, Stacey Abrams.”

Another point ignored by the networks? Despite the claims by Abrams that Kemp’s election integrity legislation would suppress the vote. Instead, the opposite has happened. Here’s a tweet from NBC’s Blayne Alexander on this very topic: The hiding of Abrams’s election denialism was sponsored on ABC by Target. Click on the link to let them know what you think.

BRIAN KEMP: None of the laws changed.

STEPHANOPOULOS: The candidates debating over guns.

GEORGE STEPHANOPOULOS: First, the latest on the midterms exactly three weeks away and the stakes are especially high in Georgia where there was a debate showdown in the governor’s race. A bitter rematch getting national attention. Rachel Scott on the scene in Atlanta. Good morning, Rachel.

BRIAN KEMP: Miss Abrams is going to lie about my record because she doesn’t want to talk about her own.

SCOTT: Kemp defended his recording, point to his decision to re-open schools and businesses during the pandemic. Repeatedly tying Abrams to President Joe Biden.

KEMP: She supports she’s policies that have raised taxes on hard-working Americans and Georgians when they promised they would not.

SCOTT: And then there was this moment. A contentious clash over crime and gun policy including a bill Kemp signed into law that allows Georgia residents to carry a handgun without a license.

KEMP: There’s a federal background check on every individual that buys a firearm in the United States of America.

ABRAMS: That is not true. Mr. Kemp, that’s not true.

KEMP: I understand the point you’re making. But the point is when you buy a firearm, you get a background check. None of the laws —

ABRAMS: Mr. Kemp, if you purchase a weapon in Georgia through a gun sale or private sale, you are —

MODERATOR: We are going to have to move on.

KEMP: I have not interrupted you tonight.

ABRAMS: This is a very important topic to me and I apologize for my outburst.

SCOTT: The debate taking place as early voting gets under way in Georgia, a state that could decide which party controls the Senate. Voters will decide between Democratic Senator Raphael Warnock and Republican Herschel Walker. The staunch anti-abortion candidate still denies allegations he paid for a woman’s abortion. Now acknowledging for the first time he did give a $700 check to his ex-girlfriend. But he couldn’t say what the money was for. Some Republican voters told us they still support him.

MAN: I had to go with Herschel Walker which is basically just a vote against Warnock, you know, if I had to choose the lesser of two, so that’s what I did.

TIM RYAN: This is why J.D. Vance with all due respect is a fraud.

SCOTT: In a tense exchange he accused him of pushing racist beliefs.

J.D. VANCE: You are so desperate for political power that you’ll accuse me, the father of three beautiful biracial babies, in engaging in racism. You can believe in a border without being racist.

RYAN: I was never talk about your family. Don’t try to spin this because you don’t want to talk about the fact you’re with the extremists in that belief.

SCOTT: The stakes here are so high. Let’s talk about where things stand. Our friends at FiveThirtyEight say Democrats are more favored to hang on to the Senate. If they win in Georgia, their odds of flipping the Senate go up to 64 percent. nd if they win that Ohio senate race as well it goes up to 73 percent. With margins this close, every single race matters, Michael.