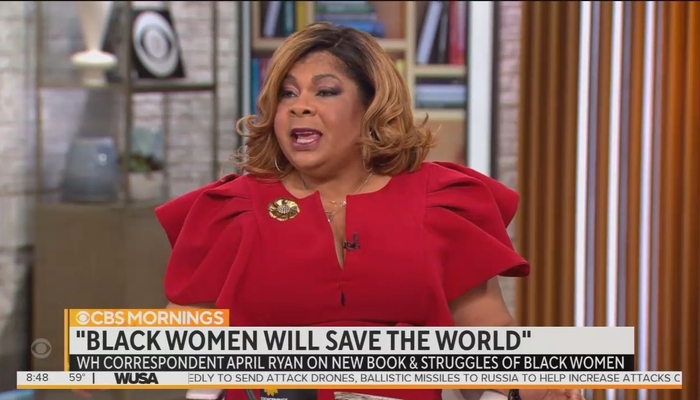 Monday’s CBS Mornings closed with an eye-rolling and nauseating interview with author, CNN political analyst, theGrio White House bureau chief, and White House Briefing Room charlatan April Ryan on the heels of her new book Black Women Will Save the World: An Anthem that, according to Ryan, was the first attempt by anyone to make sure history gave credit to black women.

April Ryan is the longest serving black female White House correspondent ever. She joined the White House press corps back 25 years ago and has covered five presidencies. Ryan is the Washington bureau chief for theGrio. Her new book is called Black Women Will Save the World: An Anthem. In it, Ryan on her own experiences, shares conversations with black female leaders, and lays out the obstacles that many face and overcome.

Miller lobbed the first of many softballs: “The title in and of itself is a pretty tall order. How — how do black women do it? How have they done it? And why are you sharing the playbook?”

Ryan insisted she wrote the book “because now is the moment” and “[w]e are seeing a change, a shift, and no one is marking the history and I believe from the unique perch that I’ve been blessed to sit in for 25 years, I said I have to do it” with black women in the administration, on the Supreme Court, in the vice presidency, and at the White House podium.

With interjections of agreement from co-host Nate Burleson, Ryan reiterated the insane falsehood that “no one is marking the moment” that black women have become so successful and need to be appreciated (thanks to Ryan’s doing) or history will forget them.

Seeing as how, for example, Justice Ketanji Brown Jackson and Vice President Kamala Harris have both received adoring coverage, co-host Gayle King is the highest paid personality at CBS News, and King’s best friend Oprah Winfrey has made billions as the most successful talk show host of all time, that’s highly questionable.

The lovefest dragged on with Ryan sharing that she was inspired by her mom, who told her “I could be and do anything I wanted to do, and I believed her and now, I’m sitting here as the longest serving black female White House correspondent in history because of her.”

Burleson had the final set of softballs about how “black women have mastered the art of juggling while wearing the weight of the world on their shoulders,” and what advice did he have for women who “feel invisible in these spaces” of power.

Right on cue, Ryan answered by invoking Valerie Jarrett and, of course, herself. Worse yet, she peddled a tall tale form the Obamas that Michelle wasn’t initially recognized when on trips outside the White House (click “expand”):

RYAN: I’m glad you brought that up. I have a great story in this book from Valerie Jarrett, former adviser to former President Barack Obama. Sometimes when she shows up in these major rooms with world leaders at the table, she’s like, wait a minute, do I belong here? Yes, you belong — right. This woman who is — been a world leader herself —

RYAN: — and she comes from a lineage of slavery, of the haunts and the ghost of slavery. And many of us walk into rooms and say, okay, I’m here. Shelly Chisolm said if you don’t have a seat at the table, bring a folding chair. We are convening those tables, have the folding chair on our back, but we’re making solid chairs so we can sit in. And — and —

MILLER: You did it in the White House Press Briefing Room.

RYAN: But I stand on the shoulders of so many.

RYAN: I stand on the shoulders of Alice Dunagan and Ethel Payne, the late great Gwen Iffe. Nichelle — so many women that came before me and poured into me, so I could stand in some of the toughest times and the best of times. But I want to get back to this invisible piece and this is so poignant.

RYAN: Valerie Jarret gave me a story and said when we talk about invisibility, think about Michelle Obama.

RYAN: When she was president of the United States, when they would go for their walks out in — beyond the White House, people would not recognize Michelle Obama. How can you not recognize —

BURLESON: How about that?

Whether it’s calling Donald Trump a “dictator” for his July 4th event at the Lincoln Memorial in 2019, denouncing border security as racist, labeling Governor Ron DeSantis (R-FL) as a mansplainer, melting down over someone noting Hillary Clinton made mistakes in 2016, raging at Trump press secretaries, and questioned the idea of standing for the national anthem, Ryan shouldn’t be seen as a serious person.

CBS sucking up to one of the most polarizing White House correspondents in recent memory was made possible thanks to the support of advertisers such as Hyundai and McDonald’s. Follow the links to see their contact information at the MRC’s Conservatives Fight Back page.

To see the relevant CBS transcript from October 17, click here.