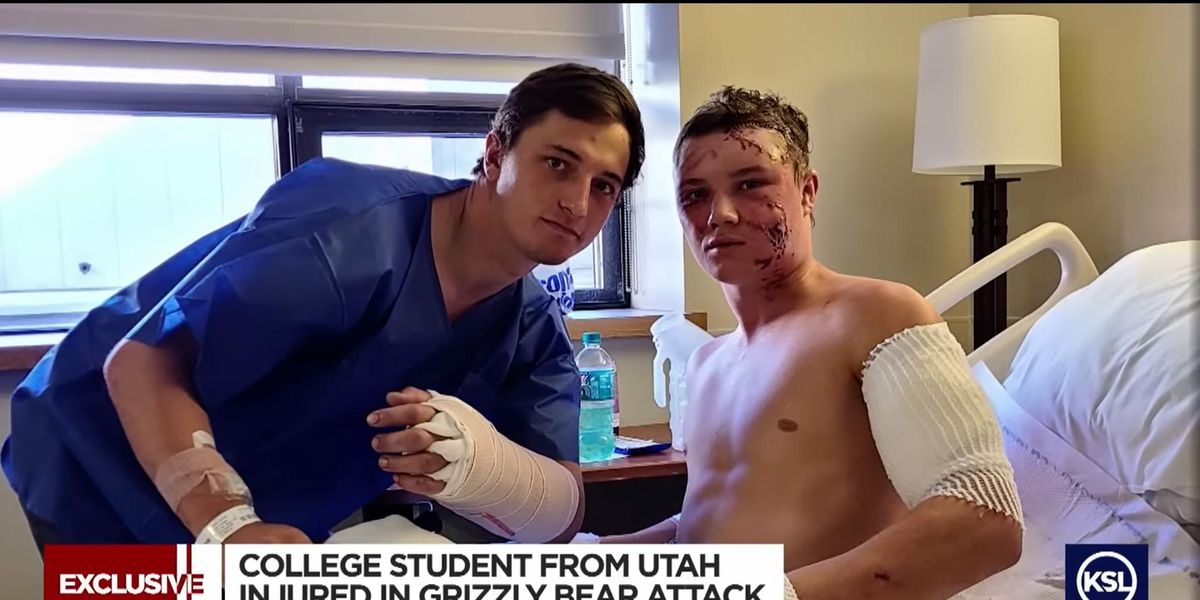 Two sophomore wrestlers from Northwest College went antler hunting with friends in Wyoming’s Shoshone National Forest over the weekend. What was supposed to be a respite from the pressures of school life and their sport turned out to be a deadly competition like none other. Kendell Cummings of Evanston, weighing in at 141 pounds, and Brad Lowry of Cedar City, weighing in at 149, came across a grizzly bear, weighing in at an estimated 800 pounds. Running away was not an option.

Cummings, Lowry, and their compatriots, Orin Jackson and August Harrison, were collecting shed antlers when Lowry indicated the day was coming to a close. While the group began meandering back to their vehicle, Lowry and Cummings split off to see if they could secure another handful of antlers.

Lowry told KSL5 that the detour landed them in questionable terrain: “I saw bear crap all over, and I looked at Kenny and said, ‘There is a grizzly bear here.'”

According to the Wyoming Game and Fish Department, the young men had found themselves “at close range in heavy cover … west of the Bobcat Houlihan trailhead.”

Sure enough, “Right after I said that, the bear came out of the willows,” said Lowry. “It was thick. It came at me and charged me and tackled me off this cliff into this gulley and was going at me for a little bit.”

The young men had bear spray, but later noted that “it happened so fast; there was no self-defense that could have been done in that situation.”

u201cComing up at 5 on @KSL5TV: A wrestler from Utah attacked by a grizzly bear in Wyoming, he and his teammate who was also attacked spoke exclusively with me from their hospital in Montana. The young men say theyu2019re alive today because of their teammates. #ksltvu201d

The bear chomped down on Lowry’s arm. The pressure of the bite and the bear’s relentless thrashing broke it.

Lowry said, “It shook me around and I didn’t know what to do … I curled up in a ball and it got me a few more times.”

That’s when Cummings entered the ring.

Cummings bellowed at the bear, desperate to capture its attention. When that didn’t work, Cummings kicked at the grizzly and then yanked at its hair, pulling it back and off of Lowry.

The grizzly turned its attention to Cummings.

“It tackled me,” said Cummings, “chewed me up a bit, and then when it was done, it wandered off.”

Afforded an opportunity to get help, Lowry told KSL5 that he ran to track down his other teammates and called 911.

The ordeal was not over, however. The bear returned and once more set to work on Cummings.

“It got me again, chewed on me, and that’s when it got my head and cheek,” said Cummings. “And then it went away again for whatever reason.”

Cummings hadn’t tapped out. Bloodied and torn, he got up and stumbled toward his teammates, who found him approximately five miles away from the trailhead where they had parked.

WGFD noted that a hunter in the area helped the men reach the trailhead, where they were met by search and rescue personnel.

Cummings was taken to St. Vincent Healthcare in Billings, Montana, by helicopter. Although first taken to Cody Regional in Wyoming, Lowry was later flown to St. Vincent.

Sitting beside Cummings in the hospital, Lowry said, “I’m just glad we have each other still; glad all four of us walk off that mountain. … I don’t think anyone else lesser than a wrestling team with a bond like we have — they wouldn’t have handled it as well as we did.”

Lowry’s dad, Dallas, flew to Montana to be with his son after the draw with the bear. He said Cummings “saved my son’s life … That young man over there — Kendell is my hero. Any normal person would have turned and ran, but these bonds that they build in college athletics lasts forever.”

Extra to Cummings, Lowry suggested there was another force at work that proved salvific: “When I was under that bear … if it wanted to kill me, it could have killed me. There was someone looking out for me and Kendell.”

Smith noted, “In the vicinity where the attack occurred, reports from landowners and hunters indicate there may be six to 10 different bears moving between agricultural fields and low elevation slopes … Game and Fish will continue to monitor bear activity in the area and work with the U.S. Fish and Wildlife Service to make management decisions in the best interest of public safety.”

“This is a sad and unfortunate situation, we wish both victims a full and speedy recovery,” Smith added.

In an October 16 email, Northwest College President Lisa Watson noted it took “no small amount of bravery for this to have ended without tragedy. … May their recovery be swift, and their spirits remain strong.”

Whoopi/Sunny: Christians Must Bake the Cake, Only We Get to Deny Service
Man thrown over the side of a bridge after Chargers game in wild incident caught on video says his attacker has still not been arrested by police
Democrat Strategists Worry About a Spoiler Candidate in 2024
Sunlight is the Best Disinfectant
Cuba’s Bustling Black Markets Hold an Important Economic Lesson