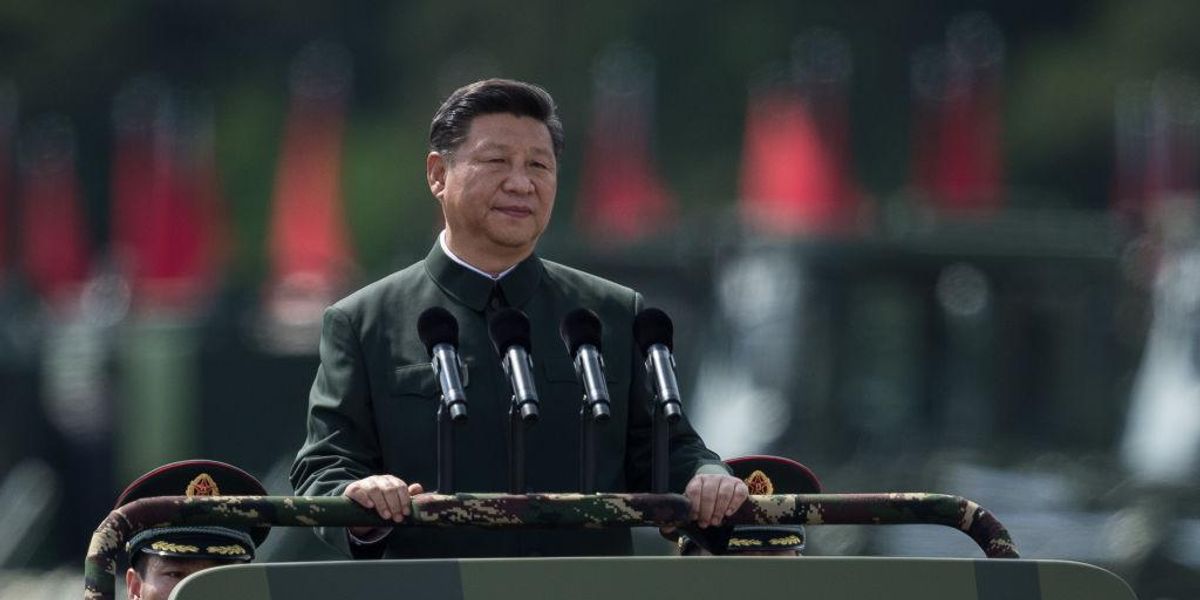 On Sunday, 69-year-old Chinese president Xi Jinping spoke at the opening ceremony of the Chinese communist party’s 20th National Congress before a crowd of the nation’s elites. Although he did not mention the United States by name, Xi intimated that a conflict was on the horizon, saying, “Be mindful of dangers in the midst of peace … Get the house in good repair before rain comes, and prepare to undergo the major tests of high winds and waves, and even perilous, stormy seas.”

Willy Lam, a senior fellow at the Jamestown Foundation, told the New York Times that Xi’s “stance this morning showed that U.S.-China confrontation will continue.”

Extra to detailing what he regarded as accomplishments, Xi’s speech was primarily concerned with ways to guarantee China’s superpower status and its “rejuvenation.”

In his speech in the so called Great Hall of the People, Xi — expected to extend his decade-long rule for another five years — mentioned “national security” 26 times. He claimed his regime’s total crackdown on protesters in Hong Kong was a victory and emphasized that the People’s Liberation Army must “safeguard China’s dignity and core interests.”

Taiwan is considered one such core interest, which the CCP claims to belong to China.

“We will continue to strive for peaceful reunification,” said Xi. He noted that the CCP “will never promise to renounce the use of force. And we reserve the option of taking all measures necessary” against “separatists” and “interference by outside forces.”

Xi added that “the wheels of history are rolling on towards China’s reunification and the rejuvenation of the Chinese nation. The complete reunification of our country must be realized and it can without a doubt be realized.”

Yu Jie, senior research fellow on China at Chatham House’s Asia-Pacific Program, suggested that Xi’s remarks sent a “further warning to the U.S. and other Western allies which are perceived as interfering in Taiwan affairs.”

The office of Taiwanese President Tsai Ing-wen issued a response to Xi’s speech, emphasizing the island nation is a “sovereign and democratic country.”

Tsai Ing-wen’s spokesman, Xavier Chang, said the “consensus of the Taiwanese public is that territorial sovereignty, independence and democracy cannot be compromised and that military conflict is not an option for the two sides of the Taiwan Strait.”

Taiwan’s insistence on its sovereignty comes amidst sustained encroachments on the island by the PLA.

u201c5 PLA aircraft and 4 PLAN vessels around our surrounding region were detected today (Oct. 16, 2022) until 1700(GMT+8). #ROCArmedForces have monitored the situation and responded to these activities with aircraft in CAP, naval vessels, and land-based missile systems.u201d

Part of Xi’s expressed desire to protect China’s so called core interests involves accelerated military buildup, which will not just affect Taiwan, but all countries in the region.

Japan, India, and Southeast Asian governments are similarly at odds with China over territorial claims in the Indo-Pacific region.

The U.S., both under former President Donald Trump and under President Joe Biden, made clear its intention to check Chinese aggression, in part through via its Quad alliance with Australia, Japan and India.

While presently in a position to do so, Xi’s indication that China “will work faster to modernize military theory, personnel and weapons” and “enhance the military’s strategic capabilities,” along with past moves to do so, have been identified by some as a prompt for America to step up its game.

A 2021 estimate put China’s military budget at $252 billion, $526 billion less than America’s at the time. The PLA’s budget in 2022 was an estimated $229 billion, a 7.1% increase over the previous year — more than Japan, South Korea, the Philippines, and India spend combined.

Although the American Military has a bigger budget, the PLA is significantly bigger, with 2 million active personnel as of 2019, including 915,000 active-duty ground troops.

China’s navy is also growing in terms of its number of ships and capability. In June, it launched its third and most advanced aircraft carrier, the Fujian. These aircraft carriers may soon be able to use hypersonic missiles, comparable to those in the employ of Russia.

In skies, the U.S. still has China significantly outmatched, with 13,000 military aircraft versus its 2,500.

Xi’s desire to address the deficit between its military capability and America’s — with new ballistic missiles, carriers, and overseas outposts — fits within its broader goal of completing its so called “hundred-year marathon.”

Liu Mingfu, a retired colonel in the Chinese communist military, wrote a book to which Chinese president Xi Jinping has repeatedly referred, entitled “The China Dream.” Liu, a proponent for communist Chinese global supremacy, characterized the competition between China and the U.S. as not a “shooting duel” or “boxing match,” but as a “track and field” competition, or a marathon.

Michael Pillsbury, director of the Center on Chinese Strategy at the Hudson Institute, indicated in the book “The Hundred-Year Marathon” that the marathon concept is “more readily referred to in Mandarin as China’s ‘rejuvenation’ within a ‘just’ world order or, in keeping with the book’s title, ‘the China Dream.'”

Xi and other elements of the communist Chinese regime have long aspired to “replace the United States as the economic, military, and political leader of the world,” in part to “avenge or ‘wipe clean’ (xi xue) past foreign humiliations,” such as the Chinese addiction to opium in the 19th century.

Pillsbury stated that the CCP’s aim is “a world without American global supremacy.”

Not long after Xi first came to power, the Wall Street Journal reported that he had set a date for the fulfillment of his dream of becoming the dominant military power in Asia: “2049, the 100th anniversary of the Communist takeover of China.”

In his speech on Sunday, Xi alluded to the “rejuvenation of the Chinese nation” on numerous occasions, and tied the concept to national security.

Xi noted that the “next five years will be crucial.”

Nike and Kyrie Irving split up after antisemitism controversy
‘Unwoke With Kevin and Kruiser #54: Disney’s Minor Woke-ectomy and Superheroes of Yore
Elon Musk Exposes the Inside Story of Twitter’s Crackdown on Hunter Biden’s Laptop
Will Four Trumpet Playing Brothers Bring Harmony to the Broken 2020 Election?
4 Charts Expose Feds’ Hypocrisy: Cracking Down on Taxpayers While Own Improper Payments Go Unchecked