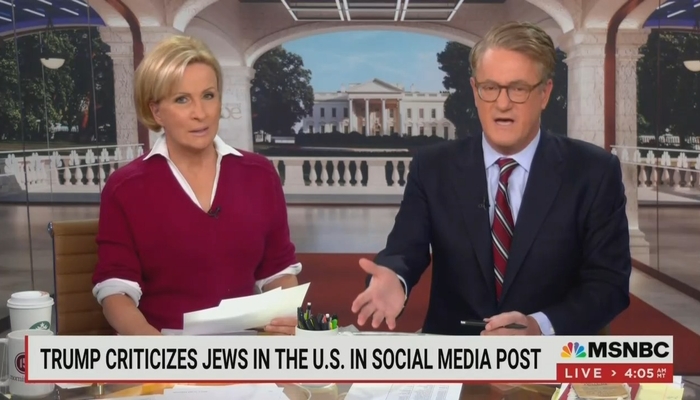 JOE SCARBOROUGH: Jonathan, really quickly, on this anti-Semitic screed that Donald Trump went on yesterday. A lot of observers saying that I saw yesterday, at least, conservatives, saying this was his worst anti-Semitic rant yet. Talk, tell us, give us some reporting from it. What was it about? What was behind it?

JONATHAN LEMIRE: No one knows. It seems to have come out of nowhere, this rant from the former president over the weekend. But we have, he has danced very dangerous to anti-Semitic remarks before. Remember, a couple moments during the campaign that happened. His defense would be, well, my daughter married someone who is Jewish, Jared Kushner, and therefore I can’t be anti-Semitic.

But this is pretty repulsive stuff yesterday. And it was, you’re right, widely condemned, and not just by the usual Democrats. There were some conservatives who also spoke out against this. Obviously, the Anti-Defamation League and other groups worried about what this could yield, condemned what Trump posted on his fledgling social-media site. We haven’t gotten anything else from the Trump camp on this.

But we should take a moment and put this in context. This tweet comes at a moment where bias incidents and hate crimes, anti-Semitic incidents are already skyrocketing. They have really been on the rise in recent years, and it feels like we know the president has inspired the violence of January 6th, has seemingly called for his supporters to be violent other times, related to the Mar-a-Lago case, sending out warnings, seemingly threats to the FBI.

And the fear here is, this could be interpreted by his followers as a moment to potentially commit violence against Jews. And that is deeply worrisome, and we will now need to see who else steps forward and do any Republican lawmakers also condemn these remarks in the days ahead?

SCARBOROUGH: Well, and again, I mean, even the fine line, Jews need to basically get their act together before it’s too late, obviously deeply disturbing because it’s not, it’s not sending a dog whistle. That’s out-and-out —

MIKA BRZEZINSKI: No! Screaming it out loud.

He’s still smarting by the fact that over three-out-of-four Jews in America voted for Joe Biden. So, there are people close to him that suggest that still rankles him, that he got beaten so badly among Jewish voters in America.

But, but, but to do that, and then to say basically, they better get their act together before it’s too late, certainly does sounds ominous. It sounds ominous like saying that Mitch McConnell has a quote death wish.

Donald Trump apparently back on Twitter after poll votes to lift his ban
Steven Crowder’s ‘Change My Mind’ takes an unexpected turn toward civility on a typically polarizing issue
HERE WE GO: Power Outages Possible in Parts of SoCal on Thanksgiving Due to High Winds
Where Should Republicans Start With Impeachments Next Year?
US Men’s Soccer Team STAND For National Anthem-Woke LGBTQ Crest Nowhere To Be Seen