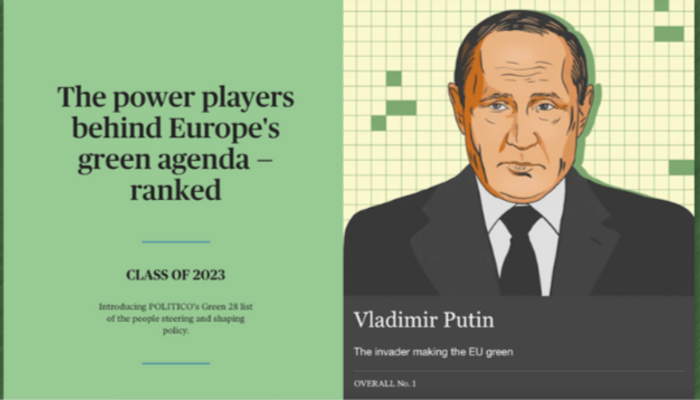 This is sick: Politico put Vladimir Putin #1 on its list of “power players behind Europe’s green agenda.” They began: “It took a war criminal to speed up Europe’s green revolution.” By invading Ukraine, “Putin has achieved something generations of green campaigners could not — clean energy is now a fundamental matter of European security.”

How callous is this to all the people killed and maimed and displaced in this war? Oh, but in this unbylined article, Politico says Putin didn’t please Greta Thunberg on purpose, concluding: “Putin stands as a monument to the epic effect of unintended consequences.”

“Renewables give us the freedom to choose an energy source that is clean, cheap, reliable, and ours,” EU Green Deal chief Frans Timmermans said less than two weeks after Putin’s tanks rolled in.

Seven months on, a POLITICO survey of data on clean energy, energy savings and policies shows that the first signs of that green surge are appearing. Analysts are in little doubt that the change is structural, permanent and historic.

“We will look back at this situation in 10 years time and see, OK, that was the moment where we really got serious about the green transition and we really had the big green acceleration,” said Simone Tagliapietra, a research fellow at the Brussels-based think tank Bruegel.

It gets worse: they suggest that by dogmatically canceling fossil fuels, they can celebrate the “freedom” of green power:

Putin’s influence on Europe’s green agenda in 2022 is inarguable. Every decision on investment, research and policy is now being filtered through the lens of energy as a matter of European security.

This has broadened the political coalition for green energy. Politicians who considered the safety of the climate a softer imperative than the economy or military can now embrace a heat pump as if it were a howitzer. In the days after the invasion, German Finance Minister Christian Lindner — a free market liberal who is no great friend of the climate agenda — declared renewable energy to be “the energy of freedom.”

Politico further signaled its indifference to human suffering by admitting it’s not great in the short term:

The green acceleration doesn’t mean Europeans will avoid a succession of brutally cold and expensive winters. This crisis also means that governments across the bloc have been preoccupied with short-term measures to stave off blackouts, rather than doing their utmost to aid the longer-term energy shift.

But those immediate actions to keep the lights on are largely temporary and might avoid longer-term dirty investments.

Congrats, Politico: your devotion to the green agenda runs right over human suffering.