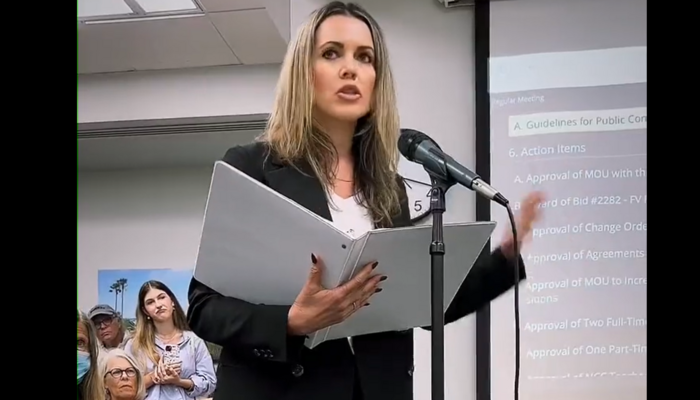 There is perhaps no greater and underutilized force in the war against gender ideology than the voices of mothers who are fed up with the agenda being shoved down their children’s throats in public schools. When mothers speak up to defend their children, it is powerful to behold. Brittany Mayer, a mom who lives in San Diego, posted a video on her Twitter account on Tuesday that has gone viral in which she called out the Encinitas Union School District for organizing what they called a “family-friendly drag show.

The event was titled “Boo Bash” and was organized for Oct. 29. But when dozens of parents found out that the school was planning on hosting a drag show, they demanded the school board to stop promoting the event and issue an apology. Naturally, the board stubbornly refused, and that’s when Mayer stepped in.

On Tuesday night’s school board meeting, Mayer stood up and delivered a thunderous speech eviscerating the board for its actions, which also include support for other grooming initiatives and the LGBT agenda.

We will call it exactly what it is🔥 pic.twitter.com/s4fKgC0NIR

While her word choice, delivery, and ability to get the crowd behind her are admirable, the element of her speech that stands out clearest is her willingness to specifically describe the evil that the school promotes exactly for what it is.

“What is it about a grown man costumed in a sparkly bra with augmented boobs busting out and wearing a miniskirt barely covering his twerking a– with duct tape on his front while spreading his fish-netted legs as he writhes on the ground, grinding his groin next to a minor, family-friendly?” Mayer said.

Too often, conservatives reel back and shy away for exposing what exactly happens in drag shows like this. Oftentimes, we hear people call it “disgusting,” “wokeness,” or some negative adjective that certainly describes it, but doesn’t accurately characterize the evil that comes with this agenda.

But Mayer pulls no pouches and starkly says what most are afraid to. More voices like hers are need, because as MRCTV’s Tieren-Rose Mandleburg wrote earlier this week, the sexual confusion schools promote is a big reason why the number of transgender youths in 2021 was up 70 percent from 2020.

We should be naturally stirred by Mayer’s courage and commitment to truth in an age when both are in short supply, and further follow her example in how to confront those who would dare to make sexual disciples of children when they have no right to.

Mississippi Golfer Bites Off Man’s Nose in Fight Over Game – Nose Still Hasn’t Been Found
Flashback: The Media’s Clown Show Coverage of 2015 Terrorist Attack
Despite Apple Withholding MAGA Rapper’s Latest Album, Bryson Gray Continues To Fight For Free Speech
Millions flock to mark death of TikTok ‘bones, no bones’ star – Noodle the dog
Man behind the Korean wave talks about the future of K-pop and what aspiring artistes can do