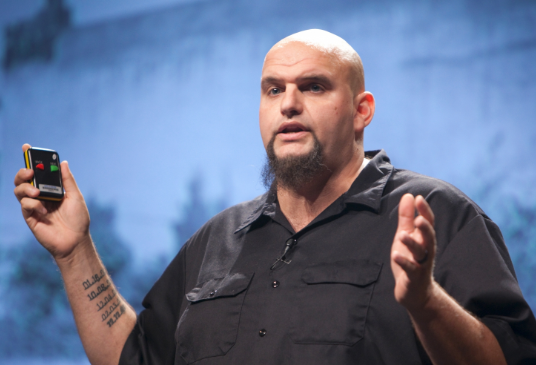 NBC News’ Dasha Burns recently aired the first in-person interview with Pennsylvania senatorial candidate John Fetterman since his stroke. The candidate needed a closed-captioned monitor to answer questions because of “auditory processing” struggles caused by his recent stroke. “In small talk before my interview,” Burns added, “it wasn’t clear he understood what I was saying.”

Oh, boy. Democrats swarmed, attacking Burns for stating the obvious: Fetterman isn’t OK. It’s remarkable to watch how quickly partisans can coalesce around a new talking point. For months, the national media has been telling us Fetterman’s campaign was completely “normal,” even as video emerges of the candidate struggling to cobble two coherent sentences in succession. In September, Fetterman said that the “only lingering issue” he experienced was occasionally missing a word or “mush(ing) two words together.” Yet in only a few minutes last night, the entire left adopted a new position, denouncing any mention of his ailment as an “ableist” attack on a person with a “disability.”

Democrats struggled to calibrate this new accusation, comparing Fetterman’s cognitive struggles to handicaps. “How is this any different from Tammy Duckworth or Madison Cawthorn needing a wheelchair? How is it different from many elderly Senators who need hearing aids?” asked left-winger Eric Michael Garcia. Others wondered if it meant Fetterman critics believed “deaf” people should not run for office.

Well, for one thing, being paralyzed does not undercut a person’s ability to comprehend ideas or articulate thoughts or participate in debates — all essential functions of a politician’s job. Fetterman is not deaf; he is unable to process spoken words because of brain damage. There’s a big difference. Some people completely recover from strokes, and some do not. We don’t know the extent of Fetterman’s problems because he won’t release his medical records. That’s his prerogative. And there is no shame in suffering a stroke. Nor is it ableist to wonder if a candidate running for the most powerful legislative body in the world is able to do his job.

Kara Swisher, who recovered from a stroke, claimed she had spoken to Fetterman “for over an hour without stop or any aides.” Then, it’s fair to ask, why he can’t participate in a debate, and why can’t he answer basic questions from journalists without a closed-captioned transcriber? “If we’re going to judge folks by their verbal skills and zoning out,” she went on, “I have some internet billionaires you might want to meet. Most of them have all kinds of processing issues and seem to be doing just fine.” She added in a now-deleted tweet that autism is not “nearly as easy to solve as a stroke.”

Does Fetterman have processing issues, or is it autism, or is he just fine? They’re still working it out. This is what happens when you create a political talking point on the fly. Then again, these days, your position doesn’t need to be consistent or coherent, just accusatory and sanctimonious.

Indeed, the rage-filled meltdown over an interview has two purposes. One is to tamp down any undesirable “narrative” from forming. The Twitter mob views media as another activist branch in the struggle and has no patience for journalistic integrity. One leftist Twitter personality actually argued that NBC News “deliberately fixate(d) on and exoticize(d) Fetterman’s straightforward accommodations for his disability.” “Fixating” on an issue means having an obsessive attachment to it. NBC merely mentioned Fetterman’s accommodation — something the candidate himself discusses — and offered a passing comment on his inability to participate in a normal conversation. That is basic journalistic transparency.

The second purpose of the Twitter mob is to dissuade future acts of journalism. The peer pressure exerted on reporters within media outlets can be extraordinary. But social media, a place most journalists spend large chunks of their time, disincentives diligent or dispassionate political journalism. It was enlightening to watch CNN’s Jake Tapper, who will occasionally triangulate coverage to create the impression of balance, mollycoddle the president of the United States the same night Fetterman was interviewed. Many journalists are just partisans and ideologues, but many others simply value their careers. All of them know that unintentionally helping Republicans by engaging in acts of journalism will be met with struggle sessions and condemnation from the people you seek to impress.

Maybe Dasha Burns will be one of the exceptions.