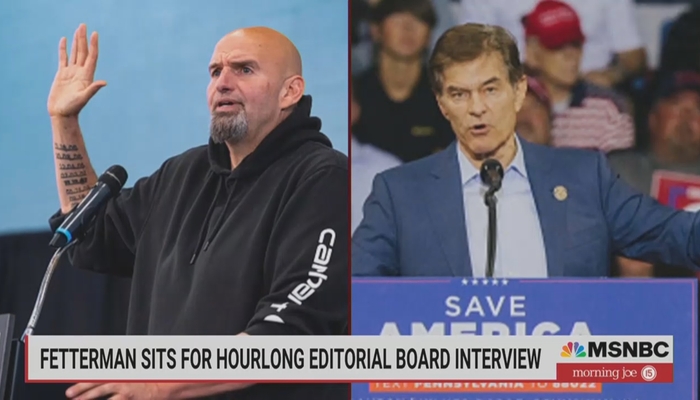 It was a schizoid Morning Joe today. On the one hand, Joe Scarborough and others defended NBC reporter Dasha Burns against criticism she has received from the liberal media for her comments on her interview with Fetterman. During the interview, Fetterman relied on closed captioning to understand her questions. In a subsequent NBC Nightly News appearance, Burns noted, “in small talk before the interview, without captioning, it wasn’t clear he was understanding our conversation.”

This from the guy who recently authored, “The Big Lie,” which the publisher describes as “a probing and illuminating analysis of current state of American politics, focusing on Donald Trump’s lie about election fraud.”

Lemire’s claim not to be on anyone’s side was further belied when he asserted that Fetterman has been “very transparent up front [about his stroke] and deserves credit for it.” In fact, Fetterman is refusing to release his medical records!

At the end of the segment, George Conway of the disgraced Lincoln Project gushed over Fetterman, claiming he didn’t know of anyone with the kind of “neurological capacity” Fetterman supposedly displays in pulling off political “jiu-jitsu” on Oz.

Note: Scarborough & Co. deserve little credit for not denying the undeniable. Of course, Fetterman’s incapacity is a bona fide issue for voters. If Fetterman needs closed captioning to understand people, he will be incapable of functioning in informal environments where, on the fly, consitutents, reporters, and others are seeking to interact with him.

Morning Joe agreeing that John Fetterman’s stroke is a legitimate issue, but then proceeding to trash Dr. Oz, was sponsored in part by GlaxoSmithKline, maker of Shingrix, Subway, Sleep Number, and Xfinity.

JOE SCARBOROUGH: An incredible report out of Pennsylvania –

SCARBOROUGH: — Yeah, which has pissed off some Democrats. They’re like, oh my God, it’s okay to talk about Herschel Walker all day, but please, don’t talk about a guy who has to read closed captionining in an interveiw. Because how dare you do that? Because voters don’t care about that.

You know, we really don’t know if voters care about that or not. So they decide, and unfortunately some people that have
quite a few followers decide they’re going to actually attack the reporter for doing the reporter’s job.

MIKA: For doing her job.

SCARBOROUGH: Wait, wait: are they getting tips from Donald Trump followers? Like why do you attack somebody for being a reporter, and by the way, this stroke, it is a significant, significant health event. And so, for people who like to attack a reporter and go, oh, this doesn’t matter. How dare they ask these questions? These are the dumbest questions? It matters and they look like fools. They look like idiots, they look like hacks, when they suggest that voters may not be interested in whether a guy is going to be able to function as a United States Senator. Right?

SCARBOROUGH: [Mika heard excitedly giggline] I love the tweet where he went to the Philly Live board, and he said, I showed up for the Philly Live board editorial board meeting, and my opponent didn’t. You can watch the whole thing. Dr. Oz skipped it. I had a stroke! And I showed up! What’s your excuse, Dr. Oz. This, see, this is how you turn a disadvantage [pounds the desk] into an advantage. [Mika squeals with delight.]

As two short people said on an ad long long, long ago. But, but, but he, actually for the first time after the Dasha Burns interview, he took outot on social media again, and started turning it into his favor. And, I must say, the expectations game.

Always critically important, these things, going into a debate, expectations game has just been shifted now. Thanks in part to Dasha Burns. She didn’t mean to do it. She meant to report. But got that out there, closed captioning screen. Dr. Oz goes there and, you know, he [Fetterman] can use that as a line. I got a stroke, he’s making fun of me for having a health-care crisis that makes me relate to you more.

JONATHAN LEMIRE: Yeah. First of all, on Dasha, our job as reporters is to tell the story, to present information. We’re not on anyone’s team, we’re not on anyone’s side. And yesterday there was plenty of that, like, why are you attacking him with a lot of whataboutism? She did a terrific job. In terms of Fetterman’s response, first of all, it’s a legitimate issue that he suffered a stroke a few months ago. He is, doctors say, his team says, he’s recovering nicely, expected to make a full recovery, but right now still has auditory issues. Therefore it’s easier for him —

MIKA: — part of the process.

LEMIRE: — to talk to someone using the closed captioning. That’s part of the process. He’s been, they’ve been very transparent up front with that, and deserve credit for it.

And now he does, you’re right, he is able to use this and his campaign has been great throughout, trolling Dr. Oz, in particular on social media, hitting Oz for living in New Jersey, for voting in Turkey, for going to Dallas Cowboys games. You know, you’re trying to represent a state that includes the Philadelphia Eagles, that’s not a good option where you’re going to Dallas Cowboys games.

And, they’ve been picking off, one after another, issues on Oz and the crudite, of course. And now this! And he’s used this, and he’s pivoting forward, setting up the debate, and also suggesting, look, I have this health issue, many of my constitutents, my future constituents, have had health issues the same. Not only is he as a human being not being compassionate, he’s a doctor and he’s not being aware of my medical challenges. So the Fetterman team took what was a very difficult moment and made it a good one yesterday.

SCARBOROUGH: Yeah, it’s really unbecoming of a doctor, of a doctor!, mocking somebody because they had a stroke.

But George, I thought Fetterman, first of all, I think you’d agree with me, it’s a legitimate issue.

GEORGE CONWAY: It absolutely is legitimate.

SCARBOROUGH: Dasha did a great job with the reporting. But secondly, it seems that coming out of that interview, Fetterman did a very good job juxtaposing himself with Dr. Oz.

CONWAY: Yeah, the jiu-jitsu that he keeps pulling off shows me like, I mean, I don’t know, who has neurological capacity to do that consistently? I think it’s pretty good!

70-year-old Marine veteran fighting for his life after braving devastating rowhouse explosion to rescue strangers
Why This Graphic Designer Can’t Be Forced to Endorse Same-Sex Marriage
House Republicans’ Next Opportunity to Drain Swamp by Banning Earmarks
His race was ‘an albatross around his neck’: Former city employee sues Seattle and its mayor over CRT-based anti-white discrimination
Texas teacher, aides arrested for allegedly locking 5-year-old special needs boy in ‘isolation room,’ where he ate feces, drank urine, and hurt himself