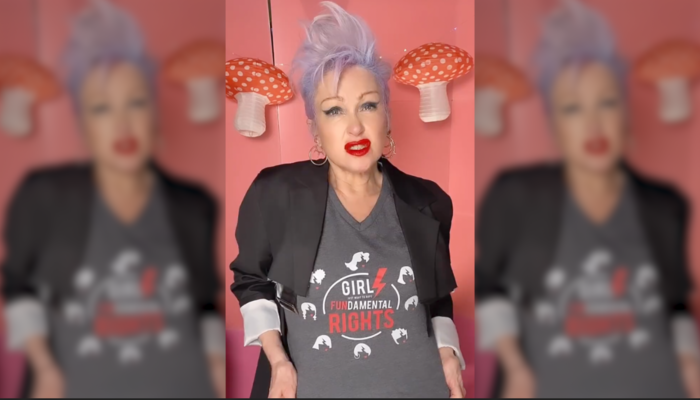 Cyndi Lauper announced her Girls Just Want To Have Fundamental Rights Fund at the Tides Foundation on Tuesday to raise money to “advance fundamental rights and health of all women.” What she means by that is advance abortion access.

Today I launched the Girls Just Want to Have Fundamental Rights Fund at the Tides Foundation, to support organizations that advance women’s rights and health. We have released this new limited-edition t-shirt with net proceeds going towards the fund. https://t.co/7ERaHWQMHw pic.twitter.com/WiDou9M1x1

Ironically, Lauper’s Twitter profile lists “mom” first in her biography but she’s admittedly against life and the gift that is motherhood based on her pro-abortion claims.

“We will be funding organizations that advance womens rights and health,” she said. Then she plugged the sale of the “totally brand new” t-shirt that she was wearing. (I’d hope it was new if someone was buying it).

Lauper released a statement on her website regarding the fund.

I never thought I would see the day that a fundamental civil right for half of the population would be taken away in this country. We must push back, which is why I am launching the Girls Just Want to Have Fundamental Rights Fund at the Tides Foundation. It is more important than ever that organizations advancing women’s rights and outreach programs ensuring access to safe and legal abortion, reproductive health, and prenatal care have the financial resources they need to do their life saving work. We will do all we can to support them, starting with funds raised from the new Girls Just Want to Have Fundamental Rights t-shirt I am releasing today. I believe in the United States and I believe that we will not only regain the right to choose, but one day actually secure full equality.

Coming from a girl who used to be a professional stylist, the shirt is ugly as hell … and that’s being generous. Anyways, that’s beside the point.

Lauper launched the campaign on The International Day of the Girl. Unironically, abortion is very anti-girl. Abortion doesn’t empower women, it traumatizes them.

“Time After Time” Cyndi Lauper has expressed her pro-abortion stance. Back in June Lauper re-released her single “Sally’s Pigeons” with an acoustic vibe just after Roe v. Wade was reversed. “Sallys Pigeons” is about women who died through back-alley abortions as if to say pushing abortion legal decisions back to states would cause this to happen.

Watching the YouTube video of the single is apparently a fundraiser so don’t look it up unless you wanna donate to what we can all assume is abortion.

Lauper previously championed for LGBTQilmnop rights with her True Colors United campaign. On the topic of gay people, Lauper told USA today that she’s worried about the future of gay marriage. “I’m worried about all kinds of rights. That’s the whole slippery slope with equality and taking away fundamental rights. You say you don’t want government control and now they’re in your bedroom and controlling forced birth. This is what happens when civil rights start to get stripped away,” USA Today reported.

It’s heartbreaking to see celebrities use their major platforms for the advocacy of the evil nature of abortion but in today’s day and age, it’s unfortunately not surprising.