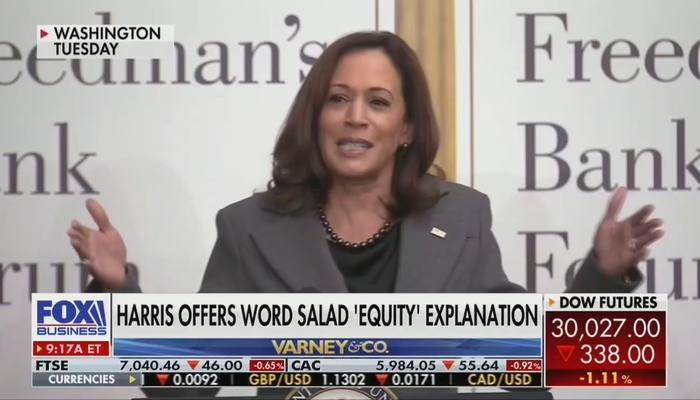 The next time a hurricane develops it should be named Kamala, in honor of our vice president. Why Kamala, you ask? Because, like a hurricane, Kamala Harris is sometimes difficult to track, her direction is often unpredictable and the damage she causes can be substantial.

Fresh off her remark (hailing) the alliance “between the United States and the Republic of North Korea,” Harris said of U.S. climate objectives and the damage caused by Hurricane Ian: “It is our lowest income communities and our communities of color that are most impacted by these extreme conditions and impacted by issues that are not of their own making. … And so we have to address this in a way that is about giving resources based on equity, understanding that we fight for equality, but we also need to fight for equity, understanding not everyone starts out at the same place.”

Equity and equality are buzzwords Democrats and the left use when they speak about race.

Storms don’t discriminate. They damage homes, cars, boats, roads and lives belonging to people of all races and colors. Is the vice president really suggesting that we distribute aid based on “equity” and “equality”?

The answer, of course, is politics.

The White House released a fact sheet detailing what disaster relief efforts were being mobilized, likely in hopes that it would replace Harris’ “word salad”, but hasn’t the damage already been done?

This close to the election, the administration is desperate to shore up its base. That’s what student loan forgiveness is about and it’s what engaging in what Harris’ apparent desire to set priorities for “equity” and “equality” is also about.

Will Vice President Harris at some point define “communities of color”? Asked by a reporter to do so, she declined.

A Google search of the words “Is white a color?” produced this result: “Some consider white to be a color, because white light comprises all hues on the visible light spectrum. And many do consider black to be a color, because you combine other pigments to create it on paper. But in a technical sense, black and white are not colors, they’re shades.”

When I was in elementary school we had Crayola crayons. Among the crayon colors were white and black. No one called them “shades.” As with other skin colors, there are many shades of whiteness. On certain applications there are categories for race. They include “non-Hispanic white.” Under the Harris plan, if my home had been damaged or destroyed by Ian, as a non-Hispanic white person, would I be on my own with possible help from my insurance company, assuming I had costly flood insurance, which The Wall Street Journal reports many Floridians have dropped?

FEMA Director Deanne Criswell was asked about Harris’ remark during an appearance on CBS’s “Face the Nation.” She seemed to contradict Harris when she said: “We’re going to support all communities … all Floridians are going to get the help that is available to them through our programs.”

Christina Pushaw, a spokeswoman for Florida Governor Ron DeSantis, pushed back even harder when she said “(Harris’) rhetoric is causing undue panic and must be clarified. FEMA Individual Assistance is already available to all Floridians impacted by Hurricane Ian, regardless of race or background.”

Aren’t we all members of “communities of color” that include rich, poor and middle-class people who have in the past and present been impacted by this and other natural disasters? If Harris had said something like this, it might have brought more unity to the country at a time of need.