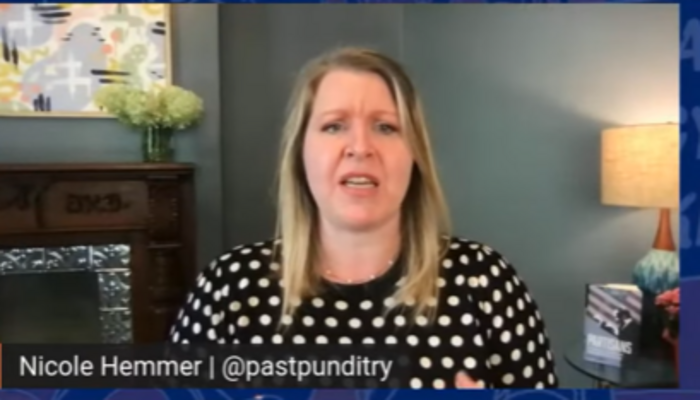 Partisans, a slanted history of the 1990s-era GOP by anti-conservative academic and CNN favorite Nicole Hemmer, was reviewed by Gabriel Debenedetti, national correspondent for New York magazine, for the New York Times under the tired headline, “Resentful, Media-Savvy and Paving the Way for Trump.”

The subhead extended the usual “Republicans are all conspiracists” idea back to the early 1990s: “In Partisans, Nicole Hemmer zeros in on ’90s figures like Pat Buchanan as guiding forces behind the Republican Party’s hard-right, conspiracy-minded turn.” And you’ll never believe who’s part of the conspiracy!

….How surprised should we be, really, to learn that “America First,” one of Donald Trump’s favored campaign slogans, was used by a pair of also-ran presidential candidates in 1992 — the hard-core right-wing commentator Pat Buchanan and the former Ku Klux Klan leader David Duke?

Many have been valuable. Still, it now takes an especially creative exploration to break new interpretive ground. By reconsidering a rogues’ gallery of figures whose media-fueled rise through the 1990s coincided with the explosive debut of a combative, nativist and populist right — and by unpacking how that movement split off from Reaganism — Nicole Hemmer accomplishes just that.

So Ronald Reagan is no longer the Great Satan in the liberal’s updated history? Fascinating, considering how he was treated in his heyday by the press.

This is partially accomplished through carefully chosen anecdotes. Take Hemmer’s reconstruction of the time George H.W. Bush, recognizing at Roger Ailes’s urging that he needed to woo Limbaugh, invited the radio polemicist to the White House and carried his bag to the Lincoln Bedroom….

“Carefully chosen anecdotes” sounds like a polite “bias by omission.” Is Hemmer really relating the full story of the conservative media universe in the 1990s, or just the parts that bolster her “conspiracy” thesis? But Debenedetti doesn’t object.

Evidently the current liberal lust for censorship has come too late:

….She illuminates the consequences of mainstreaming provocative conservative opinions as the radio and television landscapes modernized.

Next, Hemmer trashed a beloved conservative figure, the late radio host Rush Limbaugh, who backed Buchanan in 1992 and developed “into a cultural phenomenon with his zeal for racist and sexist provocation just as cable news programming found its footing and modern talk radio blossomed….”

The narrative then swerves to the emergence of militias and white nationalists obsessed with gun rights and opposed to civil- and gay-rights movements, before addressing how conspiratorial conservatives pushed the establishment G.O.P. into an investigate-first stance with Clinton in office….

Hemmer deftly avoids making it all about Trump. She doesn’t need to. The foreshadowing is painfully obvious, as when Bob Dole, in order to swing the 1996 election, baselessly charged that Democrats were flooding the country with criminal immigrants….

If the mild-mannered moderate Dole can be repurposed as a menace, then what Republican isn’t?

Everything is a Republican conspiracy for Hemmer, including Bill Clinton’s impeachment, which she has argued (in the Times) paved the way for Donald Trump’s (first) acquittal.

Hemmer actually faulted the obvious right-leaning satire site Babylon Bee, humorlessly asserting that its comic sensibility “maps really clearly with Trump’s conservatism, which is anti-liberalism more so than it is any kind of principled conservatism,” as if it were a think tank.