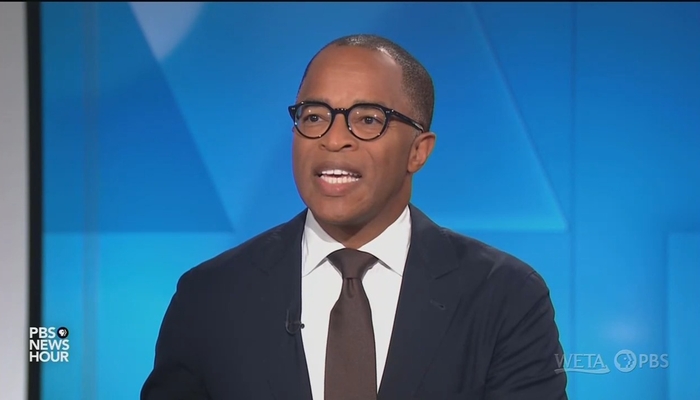 The PBS NewsHour caught up on the Hunter Biden scoop on Friday night, but that wasn’t the subject when it came to reviewing the news of the week. The taxpayer-funded crew all assumed Herschel Walker was guilty of paying for an abortion, as the Daily Beast is asserting, and there was zero mention of Walker’s denials!

Jonathan Capehart was so eager to smear all the Republicans, he asserted that conservative radio host Dana Loesch doesn’t care about children — which is always a weird allegation against pro-lifers.

AMNA NAWAZ: We see Hunter Biden’s name back in the headlines all week. Herschel Walker’s name has been in the news over reports he paid for his girlfriend’s abortion back in 2009, even as he supports a national ban. And yet Republican leadership is standing firmly by Herschel Walker. What does that tell you?

JONATHAN CAPEHART: It says a lot about the Republican Party right now. To your point, David, I think it was Dana Loesch this week really just put the — put her finger on what is happening with Herschel Walker and Georgia. And she said, basically — I’m paraphrasing — who cares about the children? Who cares about the abortion? All I want is the Senate seat for the majority. Loesch provoked liberals by asserting “If the Daily Beast story is true, you’re telling me Walker used his money to reportedly pay some skank for an abortion and Warnock wants to use all of our monies to pay a whole bunch of skanks for abortions.” She added “I don’t care if Herschel Walker paid to abort endangered baby eagles — I want control of the Senate.” Like many conservatives, she sees the Daily Beast as using an anonymous woman’s claims to keep Sen. Raphael Warnock in power.

Earlier, David Brooks was also sad the Walker story isn’t sinking his campaign, agreeing with Capehart that he’s not qualified for the Senate. “It used to be, if somebody did something really bad, Herschel Walker, a bunch of unacknowledged kids, like, that’s not great if you’re a family-values guy. You would think it would hurt. And yet, if you look at the polls, they’re pretty tight in that race. Walker was up one. Warnock was up more recently, but they’re tight. And so the question becomes, maybe scandal doesn’t matter.”

PBS aired a seven-minute interview on Hunter Biden with Washington Post reporter Devlin Barrett, who broke the story on Thursday afternoon that federal agents think Hunter can be charged with several crimes.

Barrett wrongly claimed the federal probe “sort of burst into public view in a very unusual way just before the 2020 election, when Republican operatives and advocates started talking about a found laptop and Hunter Biden e-mails that were on it.” No, before the election, the laptop was treated like “Russian disinformation.” In December, Hunter admitted he was under investigation.

Barrett bizarrely added: “And ever since then, it’s been an intense political debate as to whether Hunter Biden did anything wrong.” Maybe he’s clean as a whistle? He’s an altar boy?

PBS is brought to you….by your tax dollars. And by Consumer Cellular.

‘Momentous and historic’: New Alzheimer’s drug slows memory decline
Delta is making it harder to get into its airport lounges after they were flooded by travelers
Newsmax’s Chris Salcedo Slams Media for Silence on Dem Anti-Semites
Joe Biden as He Honors U2 at White House Reception: “150 Albums Sold! Among the Most Ever!” (VIDEO)
White House hosts celebs, politicians, and others for decadent state dinner that includes caviar-dolloped lobster as Americans grapple with soaring inflation