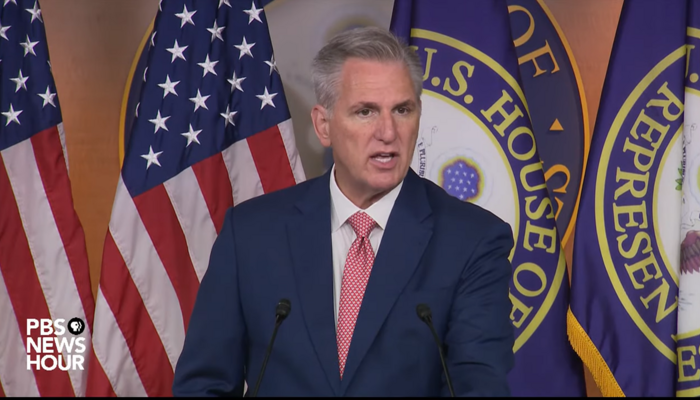 Although pitched as an analysis of the punch-counterpunch dynamic between those two prominent congressmen, it’s obvious Karni sides with Democratic Speaker Nancy Pelosi against top Republican Kevin McCarthy of California, who may take her place if November elections unfold Republicans’ way. WASHINGTON — She has called him a “moron.”

He has mused publicly — purely in jest, his aides later insisted — about wanting to hit her with the oversized wooden gavel used to keep order in the House.

The relationship between Speaker Nancy Pelosi and the man who is most likely to succeed her should Republicans win control of the House in next month’s elections is barely civil. And as the moment of the possible succession draws closer, she has become less and less interested in masking her contempt for Representative Kevin McCarthy of California, the top Republican.

At a news conference last week, when asked to respond to Mr. McCarthy’s claim that she was not allowing Democrats to speak out about what he described as a crisis at the border, Ms. Pelosi said of the minority leader, “I don’t even know what he’s talking about — and I don’t know if he does.”

Ms. Pelosi, who at 82 is in her eighth year as the first female speaker of the House, specializes in emasculating takedowns of male counterparts she finds lacking. She perfected the art during the Trump presidency (see: ripping up the text of the president’s State of the Union address on camera moments after he finished delivering it).

Karni seemed to take sides, implying McCarthy had it coming for some frankly mild criticism of Pelosi.

Mr. McCarthy, 57, who made his gavel quip in front of a group of donors last year, has given Ms. Pelosi plenty of fodder for ridicule and ill will. After she barred Trump loyalists from joining the select committee investigating the Jan. 6, 2021, riot at the Capitol, Mr. McCarthy said she had “broken this institution.” He has routinely labeled her a “lame duck speaker.”

But where Mr. McCarthy has accused her of partisanship and abuse of power, Ms. Pelosi, who colleagues say abhors spinelessness and stupidity, has accused him of acting like a buffoon.

Karni, under the guise of even-handedness, piled on the insults against McCarthy.

In many ways, the two are polar opposites.

Ms. Pelosi prides herself on her virtuosic command of her fractious caucus and her ability to steer complex and high-stakes legislation through the often raucous House. Mr. McCarthy, who famously separated former President Donald J. Trump’s favored red and pink Starburst candies from the rest of the pack and presented them to him to curry favor, has focused more on politics than policy during his career in Congress. In recent years, he has often catered to his conference’s most extreme members, or to Mr. Trump.

“It’s hard for any serious person to respect someone better at counting Starbursts than votes,” Mr. Hammill said when asked for comment about their relationship. Instead, Karni cited McCarthy’s attempts to “politically resuscitate Mr. Trump after the Jan. 6 attack,” and fighting Pelosi’s creation of a specialk inquiry into the riot. So “Ms. Pelosi no longer pretends that they can work together.”

China, Russia Creeping Further Into West as Major Latin American Nations Reject US. Where’s Biden’s Strategy?
This Thanksgiving, I will give thanks for all the miraculous blessings of the free market
Old News
Chair of the Maricopa County Board of Supervisors Bill Gates Reportedly in Hiding
‘A message to silence’: Area 51 blogger has homes raided by FBI and air force agents