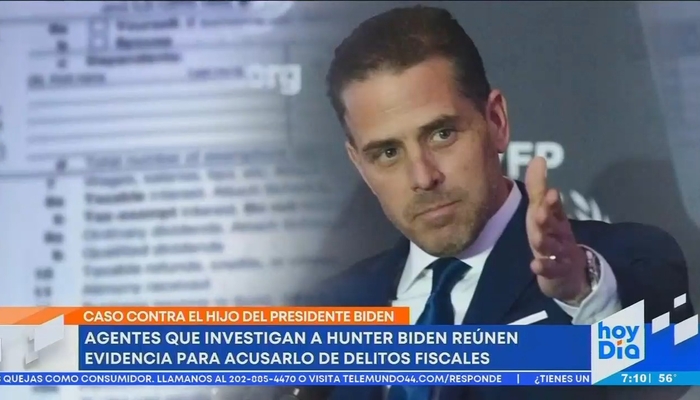 The nation´s Spanish-speaking media finally spoke about President Biden’s son Hunter, mind you, but only after The Washington Post broke the news of federal prosecutors reportedly having gathered enough evidence to charge him for lying on a gun purchase application and for alleged tax evasion.

And yet the Univision and Telemundo reports that aired on the evening, late night and morning newscasts of October 6 and 7 clearly came across as crisis management pieces- complete with tolling church bells and tender images of father and son departing a church with stained glass windows for background. One report even included Biden admitting his son’s drug use during a presidential debate in 2020.

Most importantly, the coverage shifted the attention from Hunter Biden – and his father – to Bad Orange Man Donald Trump, who in 2017 nominated the U.S. Attorney for Delaware in charge of the cases, David Weiss.

In the following compilation, we can see how the networks frame the issue as a Trump/Republican conspiracy in order to plant reasonable doubt in the minds of their audiences; while skipping the fact that although Donald Trump nominated Weiss, President Joe Biden and Attorney General Merrick Garland both chose to retain him. Watch:

PABLO GATO, UNIVISION: The final decision on whether to accuse Hunter Biden will be made by Delaware’s attorney general, appointed by former President Trump.

REBEKAH SMYTH: Now, it will be up to the attorney general in Delaware, appointed by former President Donald Trump, to decide whether to bring charges against Biden, 52.

LONDOÑO: The decision whether or not to bring charges against Hunter Biden is in the hands of the Delaware state attorney appointed by Donald Trump in 2017.

Neither networks took the time to explain to their audiences that the federal U.S. Attorneys are appointed by the current president, and are political, not career positions; it is standard for them to resign from office once there is a change of government. In this case, Joe Biden opted to leave Weiss as U.S. Attorney for his home state of Delaware.

At MRC Latino we will continue to monitor the coverage of scandal-laden Hunter Biden, with a keen eye on what comes out of these potential criminal charges of which Hunter, and only Hunter, is responsible for.

Join the Media Research Center in its mission to call out the blatant bias that passes for news in the Hispanic media. Follow this link for more information.