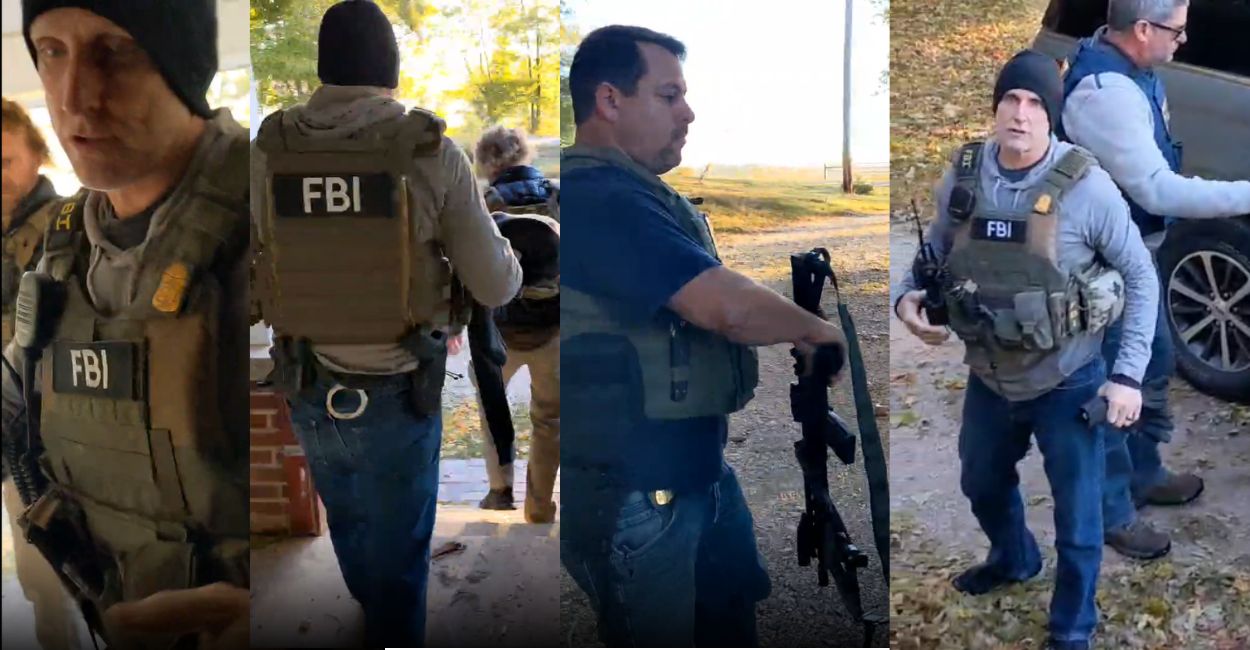 The Federal Bureau of Investigation this week arrested a pro-life father of 11 children, charging him with “conspiracy against rights secured by the FACE Act, and committing FACE Act violations.”

Paul Vaughn of Centerville, Tennessee, told The Daily Signal in a Friday phone interview that FBI came to the door of his home, “guns pointed at the door, banging on the house, yelling and screaming, ‘Open up. FBI,’ that kind of thing. When I opened the door and saw the guns pointed at me, I asked them what they wanted, who they were looking for, and they said they wanted me.”

“I had kids in the yard walking out to get in the car to go to school, I was about to take them to school, and other kids in the house,” he continued. “So seeing that the easiest path to de-escalation was me in handcuffs, I stepped outside and put an end to the ranting and the banging and the yelling.”

After the FBI put him in handcuffs and in the car, he said, his wife came outside. She had been in the back of the house with their 18-month-old baby.

Video provided to The Daily Signal by Vaughn, taken by his wife, shows FBI agents outside the family’s home. Vaughn’s wife follows them, videotaping their conversation.

“I wanna know why you were banging on my door with a gun,” she says. “Are you not going to tell me anything?”

“No, we are not,” one agent replies, while another adds, “I tried.”

The FBI did not immediately respond to requests for comment for this story.

Amid accusations that it is targeting pro-lifers to silence and intimidate, the Justice Department announced on Wednesday that it had charged 11 more pro-life activists with violations of the Freedom of Access to Clinic Entrances Act for blocking the entrance of an abortion clinic in 2021.

The 11 activists, including Vaughn, were charged with FACE Act violations stemming from their 2021 “blockade” of an abortion clinic in Mount Juliet, Tennessee. This blockade was peaceful, pro-life activist AJ Hurley told The Daily Signal on Wednesday evening.

The news came amid national outcry over the dramatic arrest of Mark Houck, a Catholic father and pro-life activist who was reportedly dramatically arrested by armed FBI agents in front of his family for allegedly pushing a pro-abortion activist who allegedly harassed his son.

Several of the activists were arrested on the day of the blockade, after reportedly successfully preventing abortions from taking place at the clinic for most of the day, but police reportedly released these activists later in the day after they posted bail for misdemeanor charges, the pro-life news outlet Live Action reported.  Vaughn told The Daily Signal on Friday that he was not arrested on the day of the blockade.

“On March 4, 2021, Coleman Boyd and Chester Gallager advertised the blockade of the Carafem Health Center Clinic, in Mount Juliet, Tennessee, which was planned for the following day,” the Justice Department release on the incident said. “In his social media post, Gallagher referred to the blockade as a ‘rescue.’ Boyd also began a Facebook livestream broadcast of the clinic blockade at 7:45 a.m. on March 5, 2021.”

The release continued: “This livestream broadcast was titled, in part, ‘Mt. Juliet, TN Rescue March 5, 2021,’ and livestreamed the blockade event as his coconspirators and others blocked the clinic’s entry doors and prevented a patient and an employee from entering. The livestream also broadcast members of the group attempting to engage a patient and her companion as Boyd told his livestream audience that the patient was a ‘mom coming to kill her baby.’”

On March 5, 2021, according to the release, the pro-life activists, “aided and abetted by one another, used force and physical obstruction to injure, intimidate, and interfere with employees of the clinic and a patient who was seeking reproductive health services.”

“It’s nothing more than suppressing free speech,” Vaughn told The Daily Signal. “It’s the same thing going on nationwide. If you’re right-of-center, conservative American-loving patriot, the Department of Justice is looking to silence that kind of thought.”

Vaughn shared that he is the father of 11 children. His oldest is 27, he said, and his youngest is 18 months. Four of his children are married, and seven of them still live at his home.

Asked if he found it odd that Houck also is the leader of a large family, Vaughn replied, “I think you just typically see that, Mary, in our faith and in our practices. It is not uncommon for pro-life people to have large families because the very concept of having children is something that we believe is a gift from God and something to be valued and sought after.”

“Is it against the odds that two large families would be attacked in two weeks? Versus smaller families that are active in pro-life work?” he asked.

“What I told the agents that arrested me on the ride into town since we had a nice hour of fellowship, is that it’s a beautiful tactic,” he added. “If you want to suppress free speech and you want to strike fear and intimidation into opposition and you weaponize justice to go after someone, to suppress, if you can get a large family, you get all the children.”

“And all the children have this memory growing up of the big, bad agents banging on the door and taking away dad. And they have an innate sense of fear now that they have to overcome in their life to oppose anything that is put upon them.”