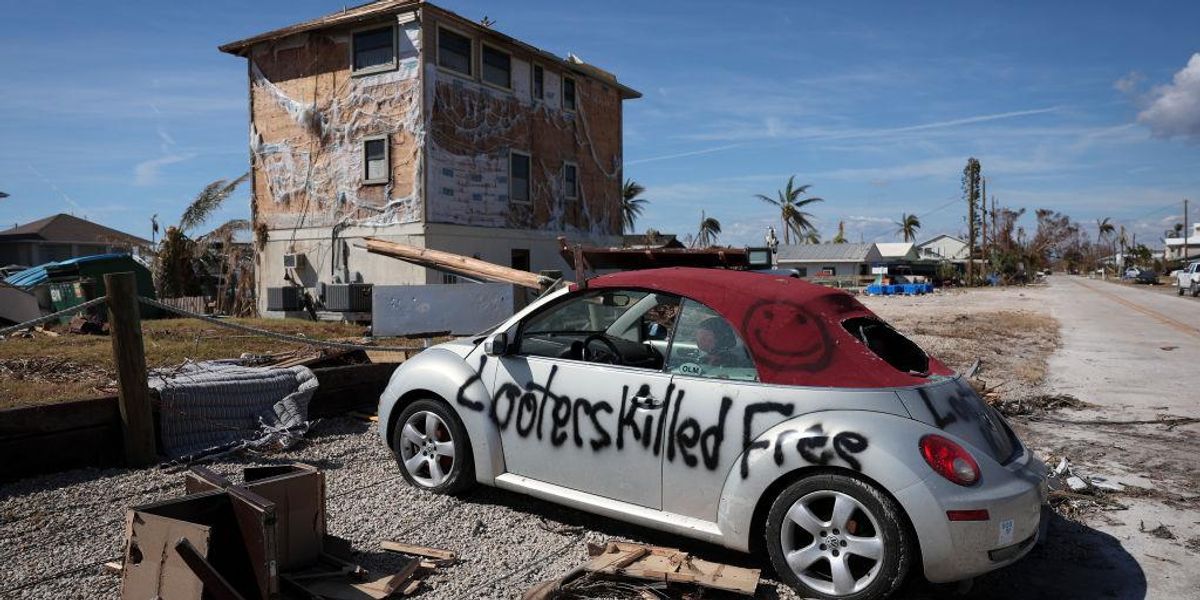 A Florida sheriff gave advice to homeowners on how to handle looters in the state: “Shoot him so he looks like grated cheese.”

“I can tell you, in the state of Florida, you never know what may be lurking behind somebody’s home,” DeSantis warned. “I would not want to chance that if I were you, given that we’re a Second Amendment state.”

Polk County Sheriff Grady Judd Grady issued an even more imposing warning to criminals considering looting. During an appearance on “Fox & Friends,” Grady commented on the cases of criminals being arrested for looting in the areas obliterated by the Category 4 hurricane.

Grady advised Florida homeowners, “I would highly suggest that if a looter breaks into your home, comes into your home while you’re there to steal stuff that you take your gun and you shoot him. You shoot him so he looks like grated cheese because you know what? That’s one looter that will not break into anyone else’s home and take advantage of them when they’re the most vulnerable and the most weak.”

Grady said that law enforcement and the community are “all gonna come together” during catastrophes like hurricanes.

“The community is gonna come together, and if there are looters that think they’re gonna take care of these people, they may breaking it, but they should be carried out in a pine box because that is unacceptable, that cuts against all laws and all reality,” he exclaimed. “You have a right, and your property has a right to be safe and secure in your home, what’s left of it.”

u201cPolk County Sheriff:nn”I would highly suggest that if a looter breaks into your home … to steal stuff, that you take your gun and you shoot him u2026 so that he looks like grated cheese.”u201d

This isn’t the first time the outspoken sheriff has issued a forceful warning to looters.

During the racial riots of the summer of 2020 sparked by the death of George Floyd, Sheriff Grady sternly warned criminals not to loot in the county east of Tampa.

“Let there be no misunderstanding, if you come here to riot, to loot, to injure people, we’re going to lock you up in the county jail,” Judd said in June 2020. “We are going to hunt you down and lock you up if you engage in any criminal conduct.”

“I would tell them, if you value your life, they probably shouldn’t do that in Polk County. Because the people of Polk County like guns, they have guns, I encourage them to own guns, and they’re going to be in their homes tonight with their guns loaded, and if you try to break into their homes to steal, to set fires, I’m highly recommending they blow you back out of the house with their guns. So, leave the community alone,” the sheriff said.

In December 2021, Grady praised a Florida resident who defended his house from a home invasion.

“The homeowner did exactly what he should have,” Judd noted of the resident in Lakeland. “He had a gun, he knew how to use it, it was loaded, and he shot him a lot. He gave him an early Christmas present. Only Santa Claus gets to come in your house — and Santa Claus is invited.”