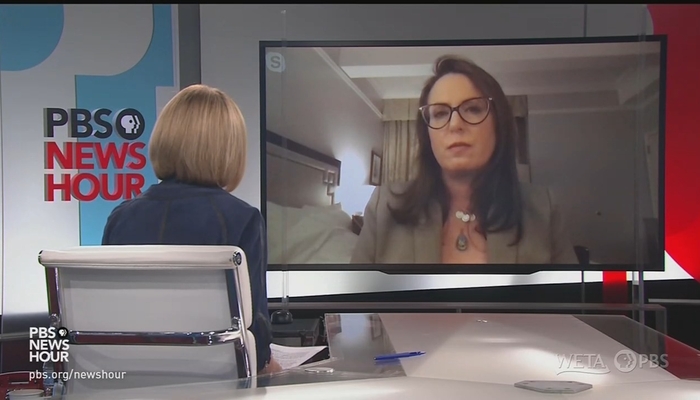 By now, everyone who follows politics should recognize that the liberal media will deliberately ignore embarrassing gaffes by Joe Biden, especially if they suggest he’s not mentally sharp enough to be the president. Biden asking “Where’s Jackie?” about a congresswoman killed in a car crash two months ago was a TV black hole: nothing on the morning and evening newscasts on ABC, CBS, NBC, and PBS, and nothing on CNN or MSNBC.

This week offered a tidy contrast, and an inevitable reminder that these same networks can never stop obsessing over Trump tweets – even after he was banned by Twitter. The taxpayer-funded PBS NewsHour took after Trump on Monday in a segment with two liberal political pundits – NPR’s Hillary-coddling reporter Tamara Keith and Amy Walter of the Cook Political Report.

PBS White House reporter Laura Barron Lopez read from a Trump post on “Truth Social,” his Twitter imitation, where he said Senate Majority Leader Mitch McConnell “has a death wish and must immediately seek help and advice from his China-loving wife, Coco Chow.” This mysterious outburst is referring to Elaine Chao, who Trump named his Secretary of Transportation.

Lopez added: “Today, Republican Congresswoman Liz Cheney said that rhetoric like that could cause violence. She also called it racist. But the vast majority of Republicans have not condemned this. So, Tamara, what does this silence among the GOP say about the party today?”

Keith seconded the PBS emotion: “Well, this is pretty classic silence. When Trump has tweeted things in the past, now he puts it out on Truth Social, he goes up to the line, he crosses the line, he does things and says things that put Republicans in a terrible position. And then they say, ‘oh, gosh, I haven’t seen the tweet.’”

We could play this game too, PBS: What does this silence about “where’s Jackie” among the TV networks say about the state of “news” today? When a man was arrested in June after a foiled attempt to assassinate conservative Supreme Court Justice Brett Kavanaugh, Woodruff reported just two news briefs lasting about a minute. No one on PBS asked if liberal tweets could spur violence. The pattern continued on Tuesday, as Judy Woodruff interviewed (and celebrated) anti-Trump author Maggie Haberman and her new book, titled Confidence Man. Woodruff asked: “Most recently, just in the last few days, he put out a statement about Elaine Chao, the wife of Senator Mitch McConnell….Do you think, at his core, that he is racist?”

Haberman also seconded PBS: “I think he has a long pattern of racist behavior going back to when he was in New York City. And we clearly saw it continue in the White House, be it attacking Elijah Cummings in Baltimore, a city that is part of the United States, and Trump was supposed to be the president for all of the United States, whether he was attacking congresswomen of color.”

The New York Times reporter concluded: “His behavior is really what matters on this front. So, what exactly is in his heart, I think, becomes irrelevant. He is behaving in a racist way.”

Earlier, Amy Walter summed up the mood of the media: “I think what we’re going to find is, the more that Donald Trump is in the news, the better Democrats feel.” Yes, that’s precisely why PBS is always making sure Trump’s trash talk is in the news, and Biden babbling like he’s lost a marble or two is spiked.

Robbery suspect won’t face murder charges in shooting of gas station clerk since suspect allegedly returned fire at clerk — which can be considered self-defense
Delta is making it harder to get into its airport lounges after they were flooded by travelers
Newsmax’s Chris Salcedo Slams Media for Silence on Dem Anti-Semites
Ron DeSantis has a new book coming out in early 2023
Ruhle, Lefty Journo Panic Over Rise of Authoritarianism in US