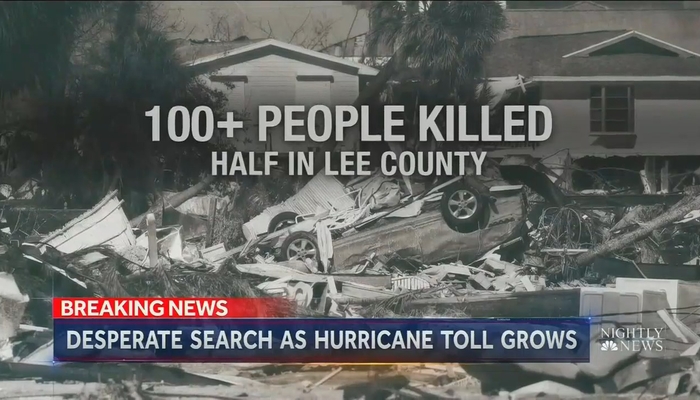 Proving that the paper isn’t worthy to line a birdcage, The New York Times ran a disgusting and hateful piece Tuesday night suggesting that because Florida Republicans Governor Ron DeSantis, and Senators Marco Rubio and Rick Scott won’t go along with the Democrat Party’s radical agenda to fight “climate change”, the state somehow deserved to be ravaged by Hurricane Ian and that the leaders were somehow personally responsible for the destruction and loss of life.

The two ghoulish leftists added a subtitle that was just as vile: “Senior Republican politicians in the state have opposed federal action against global warming, which is making storms like Hurricane Ian more destructive.”

Flavelle and Weisman wasted no time in leveling as many cheap partisan attacks as they could in the first paragraph. “Hurricane Ian’s wrath made clear that Florida faces some of the most severe consequences of climate change anywhere in the country,”  Flavelle and Weisman cried. Adding: “The state’s top elected leaders opposed the most significant climate legislation to pass Congress — laws to help fortify states against, and recover from, climate disasters, and confront their underlying cause: the burning of fossil fuels.”

Continuing to smear Florida Republicans, the two New York Times propagandists whined that “Senators Marco Rubio and Rick Scott voted against last year’s bipartisan infrastructure law, which devotes some $50 billion to help states better prepare for events like Ian because they said it was wasteful.”

Whining some more, they then bemoaned how “in August, they joined every fellow Republican in the Senate to oppose a new climate law that invests $369 billion in reducing greenhouse gas emissions, the largest such effort in the country’s history.”

This two supposed journalists decided to omit what else was lerking in the infrastructure bill while cherry-picking the part that made the Republicans look bad. The two also failed to explain how their opposition last month created or strengthened Ian.

They added that DeSantis “blocked the state’s pension fund from taking climate change into account when making investment decisions” because he rightly believed that “politics should be absent from financial calculations.”

“In the aftermath of Ian, those leaders want federal help to rebuild their state — but don’t want to discuss the underlying problem that is making hurricanes more powerful and destructive,” Flavelle and Weisman wrote in an attempt to make DeSantis, Rubio, and Scott look reactionary.

In reality, the truth is that even if “climate change” was caused by human activity, China and India are the world’s biggest drivers of greenhouse gas emissions, which the left claims are causing climate change. Republicans, being the party of common sense realize that the United States shouldn’t deindustrialize while China and India are allowed to continue growing their economies unfettered by the harassment by the woke scolds at The New York Times.

Further down in the article, they go after DeSantis and Rubio for voting against Hurricane Sandy relief while asking for aid now. This is a common left-wing talking point that has been answered repeatedly. Yet the leftist media and rags like the New York Times keep repeating it.

“Mr. DeSantis’s record on other climate decisions may also come back to haunt him. As a congressman in 2013, he voted against a bill to provide extra disaster aid to victims of Hurricane Sandy — the same type of extra support that Florida is now seeking for Ian,” they sanctimoniously claim despite the fact that Rubio has repeatedly explained his objections to the pork-laden relief package.

The article ends with a quote from Yoca Arditi-Rocha, the executive director of the radical enviro-statist group the CLEO Institute. “Florida will continue to be on the front lines of more destructive hurricanes fueled by a warming climate,” Ms. Arditi-Rocha fearmongered. “We need Republican leaders to step up.”

MSNBC’s Reid: ‘Champion Vote Suppressor’ Kemp No Different Than Trump
Trump firm guilty of defrauding tax authorities for more than 15 years
‘Unwoke With Kevin and Kruiser #54: Disney’s Minor Woke-ectomy and Superheroes of Yore
Pentagon Is Sounding The Alarm On China’s Massive Nuclear Build-Out, But Experts Disagree About How To Respond
New book says being a sports fan is good for your mental health