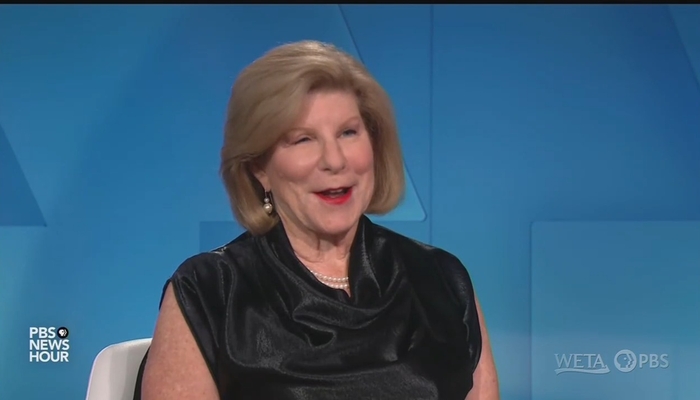 The commercial objective is fairly clear. It’s time to cash in with all of the libertine leftists who bought buckets of “Notorious RBG” merchandise. It’s no surprise this book is a hit with public-radio progressives. NPR cranked up its own taxpayer-funded publicity machine to goose the sales, including:

2. A syrupy NPR book review on September 12 by their book critic Martha Anne Toll. She began: “Count me among those who rely on NPR reporter Nina Totenberg’s crystalline explanations for all things legal, especially Supreme Court arcana — no one is clearer and more incisive.”

It went downhill from there. For example, “Totenberg became a household name during the now infamous hearings” for Clarence Thomas. Infamous? Because he made it? The next day, it was hailed as “NPR’s Book of the Day.

3. A fulsome hour on NPR’s talk show Fresh Air with Terry Gross on September 14.  It felt like “This Is Your Life,” discussing Totenberg’s violinist father and her two husbands, as well as the RBG stuff.  A chunk of it reran on Fresh Air Weekend.

4. Ten minutes on a similar afternoon news/talk show Here & Now. Host Robin Young told listeners they chatted with Totenberg for an event before a “sold-out crowd” in Boston. They howled about FBI director J. Edgar Hoover calling Totenberg a “persistent” B-word, and how in the heat of the Hill-Thomas fracas, she told Republican Sen. Alan Simpson he was a “f—ing bully” after they fought on ABC’s Nightline.

5.  There was also a very friendly seven-minute interview on PBS NewsHour. It ended with Totenberg saying to anchor Judy Woodruff “Thank you, dear friend.”

In each interview, they would touch on the ethical questions raised by the Totenberg-Ginsburg alliance. Each time, Totenberg blustered past the questions. This was no secret arrangement. Totenberg palled around with Ginsburg at the Glamour magazine “Woman of the Year” awards, and at the Sundance Film Festival to promote CNN’s saccharine RBG documentary. She uncorked a six-and-a-half-minute segment on NPR promoting the book The Notorious RBG and Ginsburg’s ascension to “cultural icon” status.

Only after Ginsburg died, NPR’s Public Editor confessed “NPR Should Have Revealed Totenberg-RBG Friendship Earlier.” At the time, Totenberg comically claimed “I have never shaded my reporting because of my friendship with Justice Ginsburg.”

Her reporting is perpetually tilted to the left. In the PBS interview, Totenberg sounded her usual Supreme Court notes: “There are six very conservative justices. It’s probably a court more conservative than any court in maybe 90 years.” (Even John Roberts!) Over the years, she warned that almost every Republican nominee was “very, very conservative” and sure to ruin everything. After Anthony Kennedy retired, Totenberg even said it was “the end of the world as we know it.”

There were liberal journalists who were bothered by the flagrant Totenberg-Ginsburg chumminess. At Politico, Michael Schaffer wrote “Could you imagine a congressional reporter doing a book called Dinners With Harry Reid, tracing shopping excursions and intimate family moments with the late majority leader, who died the year after Ginsburg?”

None of this matters at all to Totenberg. She bathed in all the fawning attention that came from her friendship with Justice Ginsburg, and she’s still cashing in on it. If Washington is described as a swamp, she’s the scaliest Swamp Thing.