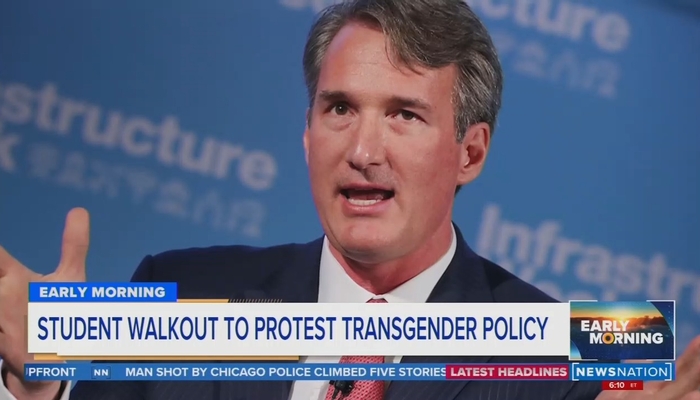 On Tuesday, far-left students in ultra-liberal areas of Virginia (and those looking to skip out on class) spilled out of their rooms and onto the streets in protest of Governor Glenn Youngkin’s (R-VA) new education policy on transgender students that ensures parents have a seat at the table.

But when it comes to the media coverage, the liberals in the journalism profession have decided that Youngkin’s policy “restrict[s] the rights of transgender students.”

USA Today reporter Cady Stanton whined that the policy dared to “put decisions on students’ identities and preferred names at school exclusively in the hands of their parents” and parroted claims from “students and parents” that “the changes put LGBTQ youth in danger because it bans they/them pronouns and allows students to be deadnamed or misgendered.”

Stanton added that Pride Liberation Project leader and McLean High School senior Casey Calabia insists certain students have come “out” as transgender “at school but not at home” and thus parents being brought up to speed about their underage children (of whom they are legal guardians) “would absolutely ruin their lives.”

While Stanton included provisions from the Youngkin administration, she buried under one phrase in the fifth graph (in one bullet point) that students can still be recognized as transgender and by their different names so long as the parents notify that school and provide legal documentation.

Claiming she had not “seen those reports,” Jean-Pierre sure seemed to have some thoughts as she insisted President Biden “supports the LGBTQI+ community” and opposes any “mistreatment of that community.”

“[H]e believes transgender youth should be allowed to — to be — to be able to go to school freely, to express themselves freely, to be able to have the protections that they need to be who they are,” she added.

But again, it has nothing to do with robbing students of any identity. Rather, it brings parents into the equation on something as monumental as altering their name and sexual makeup as well as protecting women’s sports by ensuring athletes remain with their actual gender.

Moving on, the Washington D.C.-area’s CBS affiliate WUSA-9 lamented that Youngkin “would change how schools in the commonwealth treat transgender students.”

Students at several Virginia schools are participating in walkouts Tuesday in opposition to new guidelines from the administration of Gov. Glenn Youngkin (R) that would restrict the rights of transgender students.

The walkouts, organized by the Pride Liberation Project, a statewide LGBTQ youth advocacy group, are scheduled throughout the day on about 90 campuses across the state. “These revised guidelines will only hurt students in a time when students are facing unparalleled mental health challenges, and are a cruel attempt to politicize the existence of LGBTQIA+ students for political gain,” the group said in a statement.

Catherine Knecht, 17, joined roughly 200 students who walked out of Langley High School in Fairfax County Tuesday morning. Three students from the high school spoke about their opposition to the guidelines as a part of demonstration that lasted about 20 minutes, she said. Then the students headed back into the classroom.

Knecht, who is queer, said the guidelines are “prioritizing the parents’ will over the child.” She added that many of her classmates are being raised in negative — even abusive — situations that she believes could be worsened if the draft guidelines take effect.

Down in the Hampton Roads, NBC affiliate WAVY-10 was shameless: “Students in Hampton Roads and across the commonwealth organized walkouts on Tuesday to protest new model policies from Gov. Glenn Youngkin’s administration that would roll back protections for transgender students.”

And in the Charlottesville market, CBS-19 News sneered: “Governor Glenn Youngkin is on the defense of his new policies for the Virginia Department of Education model, which sharply restricts transgender student rights.”

They added that while Youngkin “says these policies will bring parents to the forefront of matters concerning their children,” there are “many” who “disagree, saying that would be harmful.”

There, 83 percent of voters backed McAuliffe.

In a statement, Youngkin spokeswoman Macaulay Porter laid it all out for those that have their ears plugged or need to read slowly:

The guidelines make it clear that when parents are part of the process, schools will accommodate the requests of children and their families. Parents should be a part of their children’s lives, and it’s apparent through the public protests and on-camera interviews that those objecting to the guidance already have their parents as part of that conversation. While students exercise their free speech today, we’d note that these policies state that students should be treated with compassion and schools should be free from bullying and harassment.

But worst of all was how none of the coverage mentioned support for Youngkin’s policy was born out of opposition to the anti-parent policies initially laid out by his predecessor, Democratic Governor Ralph Northam (aka Governor Blackface).

In central Virginia, August County School Board held a July 29, 2021 vote to not adopt Northam’s decree allowing students to conceal their supposed gender from parents. Weeks earlier, hundreds reportedly showed up at a previous school board meeting against Northam.

Other such protests and/or votes took place in Campbell, Franklin, Rockingham, Russell, Warren, and Wise counties fought back against Northam’s moves to keep

And during the famous June 2021 Loudoun County School Board hearing, the far-left board fled so as to avoid hearing from angered parents.