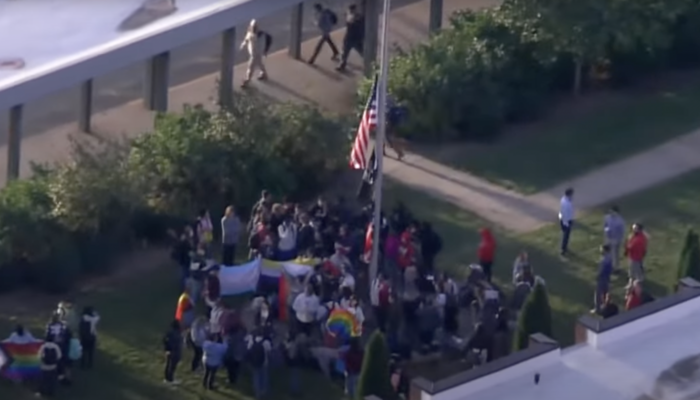 On September 16, Virginia Governor Glenn Youngkin released the state’s revised Model Policy for schools regarding parental voice in education – in reference, specifically, to pronouns, given names, and gender identity. In light of Youngkin’s emphasis on parental involvement, students in nearly 100 schools across specific parts of Virginia planned “walkouts” to protest. The Pride Liberation Project is a student-led group of over 500 members. This is the group who pushed for the protest walkouts.

Blue Virginia posted an article on September 26 regarding the pending walkouts and how the policy is “attacking LGBTQIA+ students across Virginia.” The piece also included a sentiment from one “Virginia Queer student.”

As a closeted student, my friends and I are terrified that we won’t be able to come home if these proposed guidelines go through. We just want to be ourselves at school, without worrying about whether we’ll be subject to abuse or harassment.

I wonder which school put the “Virginia Queer student” up to that.

The thing is, kids don’t know anything. They can barely cook popcorn. How are they supposed to decide what freaking gender they are? Why can’t they just worry about passing a math test or studying for the SATs? And all the policy does is keep parents in the loop.

The same release also linked to a Google spreadsheet with a list of schools, their school system, the time of day that they will be partaking in walkouts as well as a note as to whether press is or is not allowed to the event. The sheet is currently at 96 different schools and counting.

According to Fox5, some walkouts have already begun. In Culpepper, VA, students were gathered outside at 7:35 AM. Fox 5 deemed the incorporation of parents in the new transgender policy “controversial” … well, it’s clear where Fox 5 stands on the issue. Geez louise.

HAPPENING NOW: A student walkout at Culpeper Co. HS is one of many expected Tuesday across Virginia in response to the state’s new controversial policy regarding transgender students. https://t.co/zvQfpNxJyG pic.twitter.com/PnrGCKAvtE

Side note: Culpeper is about as populated as an eastern shore beach in December so this walkout, like the rest, did nothing except distract from actual issues in schools.

There is also a public form from Pride Liberation Projects encouraging the walkouts, claiming that Youngkin’s new policy “[r]equires schools to forcibly out transgender and gender expansive students,” “denies schools the right to prohibit malicious deadnaming and misgendering,” and “prevents students from having their real name and pronouns recognized,” among other lies being pushed to students.

All Youngkin’s policy does is allow parents to know what’s happening with their own children in school.

Nonetheless, the same group tweeted out:

The student voice is clear: we don’t want @GlennYoungkin to politicize our education and use our community as a political pawn.

Students know we can build affirming schools that let all thrive. https://t.co/VanblVYn3x

Did it really just say “build affirming schools”? Are ya kidding? Shouldn’t we be teaching kids about, I don’t know, academics?

Rather than affirm kids’ delusional sense of self-identity, perhaps we should teach kids things they actually need to know.

These walkouts are meaningless. All they show is that each school with students participating in “walkouts” has failed to teach basic biology. If students learned about the two and only two genders in school, this wouldn’t be happening.

Kudos to Youngkin for giving parents a say in what happens to their children in the schools that their tax dollars are funding.

A note to the media: focus on something more important.