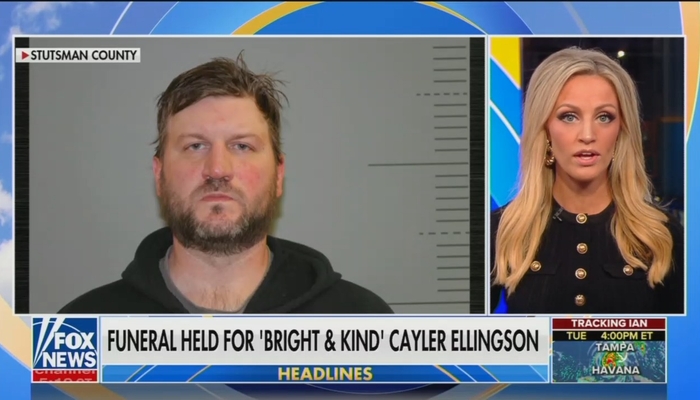 Over 100 people gathered in McHenry, North Dakota on Monday to mourn the loss of teenager Cayler Ellingson who was murdered because his alleged killer thought he was a “Republican extremist.” But you wouldn’t know about the left-wing political violence if you watched ABC, CBS, NBC, MSNBC, or CNN. These networks and cable channels have buried what would be a huge story if only the man who hit the teen was a conservative, a Republican, or a pro-life activist.

In contrast to these liberal outlets, Fox News Channel and Newsmax have covered all the details of the story. On Tuesday morning, Fox and Friends co-host Carley Shimkus explained:

More than 100 loved ones come together to remember the life of 18-year-old Cayler Ellingson who was laid to rest after he was run over by an SUV last week. His alleged killer, Shannon Brandt, told an 911 operator that he hit Ellington with his car because he was part of an Republican extremist group. But he is currently walking free, given no curfew and under no house arrest after posting what one prosecutor called a, quote, “very low” $50,000 bail.

FoxNews.com noted the sad statement from Ellingson’s family: “Our love for you will never go unnoticed, you will forever be on our minds, it’s heartbreaking to let you go… Please watch over all of us. Until we meet again, we love you, Cayler.”

Since September 18, the morning and evening shows on the networks, as well as CNN and MSNBC have been silent on the act of political violence. According to a search of CNN.com, the online version of the liberal cable network allowed just one story. CNN.com writer Andy Rose referenced the “specifics of the alleged argument.”

Brandt told a 911 dispatcher the victim was “part of a Republican extremist group,” according to court documents. Authorities did not provide further details of Brandt’s claims nor the specifics of the alleged argument.

How about our taxpayer-funded PBS and NPR? Zero coverage. The New York Times and The Washington Post had nothing.

Associated Press did a brief story, but it left out the partisan/ideological details, that Brandt said Ellingson was a Republican “extremist.” They cited the Highway Patrol saying a political argument is still unsubstantiated. They don’t want this in the “political violence” category, where it becomes fodder for national debate.

Any news that counters the media narrative of conservative, Republican extremists isn’t welcome on the networks. As I reported in June, ABC, CBS and NBC suppressed the wave of pro-abortion violence against pro-life clinics and organizations in the wake of the overturning of Roe v. Wade.