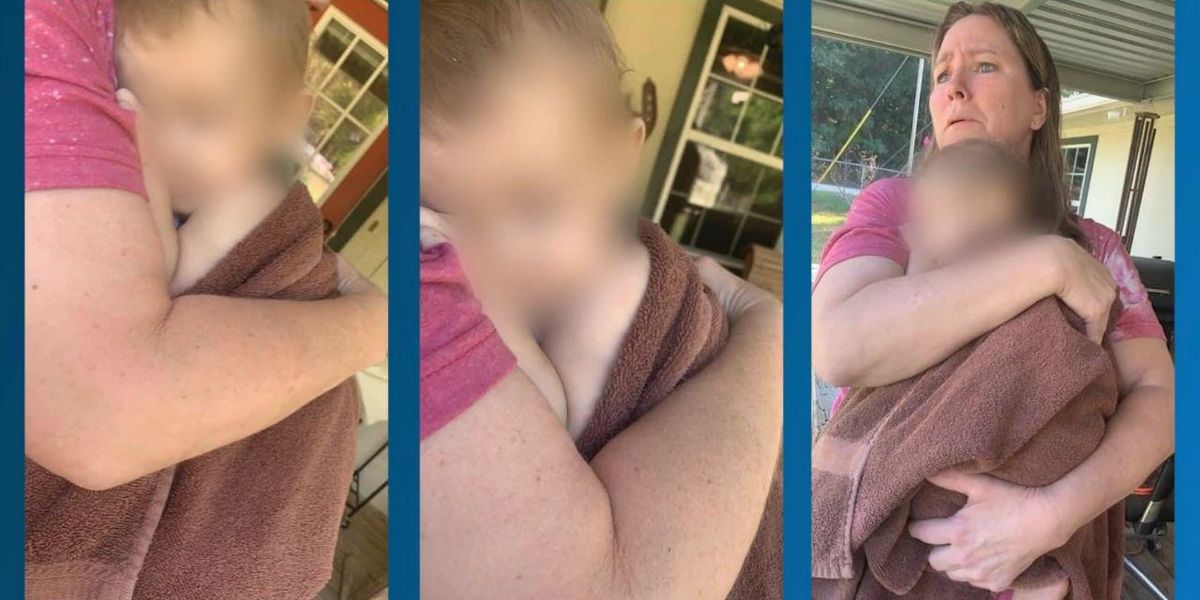 On Saturday morning, a Texas family discovered an abandoned infant in their backyard shed after their security cameras recorded a man stealing their neighbor’s truck.

John and Katharine McClain told KHOU that they woke up early Saturday morning when they heard their neighbor’s vehicle driving away. They reviewed their recorded security footage, which revealed a mostly naked man roaming around the McClains’ property.

The man is seen checking vehicle doors to see if they are unlocked. Unsuccessful, he moved on to the neighbor’s property, where he was able to steal a truck and drive off.

The McClains called their neighbor, and the truck was immediately reported stolen.

Katharine told the news outlet that their Livingston neighborhood is usually peaceful and safe.

Assuming the commotion was over, the couple were surprised when their dog started barking at the shed in the back yard.

Katharine said that immediately after her husband opened the shed door, he told her to call the police.

John stated that as he approached the shed with his dog, he could hear crying from inside. When he opened the door, he found an infant on the ground inside the shed.

“When I opened it up, the baby was laying right by the motorcycle right there,” John said.

Katharine called the authorities and was told by the dispatcher that she could pick up the baby. Katharine wrapped the baby girl in a towel and brought her inside the house while they waited for an ambulance to arrive.

Medics examed the child on the scene and then airlifted her to a Houston hospital.

Security footage revealed the man carrying the baby into the shed, where he spent hours inside with the child. He is then seen leaving the shed by himself and heading toward the vehicles on the property.

Police located and arrested the man seen on McClains’ security footage. He was found driving the neighbor’s stolen truck and charged with abandoning or endangering a child. His vehicle was discovered near railroad tracks behind the McClains’ property.

Katharine expressed that she was shaken up by the incident.

“I’m a mom,” she told the news outlet. “I was pretty frantic and distraught. It’s still kind of got me a little bit.”

Katharine said that she and her family would be willing to care for the little girl.

She said, “I just want her to be happy and live a good life, you know? If they gave her to me, I’ll take her in a heartbeat. And she’ll never have any worries again.”