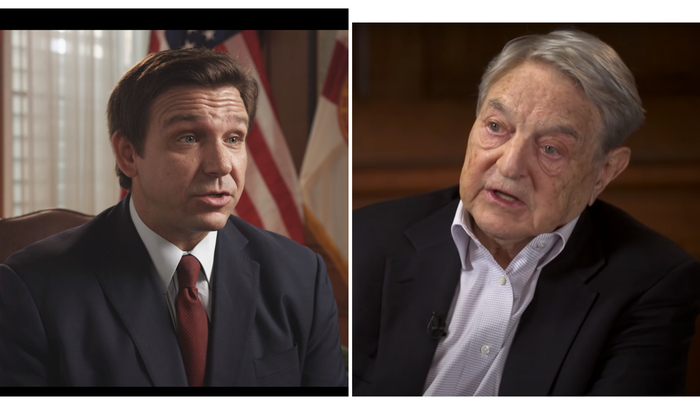 A George Soros-funded group is behind a nearly $1.4 million effort to punish Florida Gov. Ron DeSantis for shipping migrants to Martha’s Vineyard, Mass.

Immigration activists sued the Florida governor just days after DeSantis took credit for sending about 50 migrants by plane from San Antonio to the liberal paradise island of Martha’s Vineyard on Sept. 14. Lawyers for Civil Rights (LCR) filed on behalf of the group Alianza Americas, “a class of affected immigrants, including the immigrants” on Martha’s Vineyard, according to a LCR press release. Soros funded Alianza Americas with a total of $1,383,947 between 2016 and 2020, according to Open Society Foundations records. The group describes itself as “the premiere digital organizing site for the Latinx community” on its website.

This is nothing new for Soros, who has bankrolled several far-left, pro-open borders organizations. In January 2022, a Soros-funded group secured a $158 million government contract to help illegal immigrants avoid deportation, in what appears to be a violation of U.S. border security policy.

DeSantis, on the other hand, has voiced support for strong national borders. He tweeted on Sept. 15 that in Florida, “we take what is happening at the southern border seriously. We are not a sanctuary state, and we will gladly facilitate the transport of illegal immigrants to sanctuary jurisdictions.”

The LCR patted itself on the back in its press release, calling its lawsuit against DeSantis part of a “herculean pro bono effort” backed by an “army of volunteer attorneys.” Their stated objective was to seek “damages” from DeSantis for his supposedly “unlawful relocation scheme” of roughly 50 migrants to Martha’s Vineyard.

The LCR also claimed that DeSantis’s plan “added” to “vulnerability and nightmare” for the migrants who arrived in Martha’s Vineyard.

Liberals are melting down over ‘character building’ video posted by Lara Trump of her son in rain from Hurricane Ian
Rapper Kanye West, Calls Black Lives Matter a ‘Scam’
ABC’s Jon Karl Argues With Rubio Over Hurricane Relief Spending
‘Republicans Pounce!’ The Hill Squawks Over Biden Being Blamed for American Wealth Obliteration
Lionsgate leaning toward spinning off its studio business instead of Starz