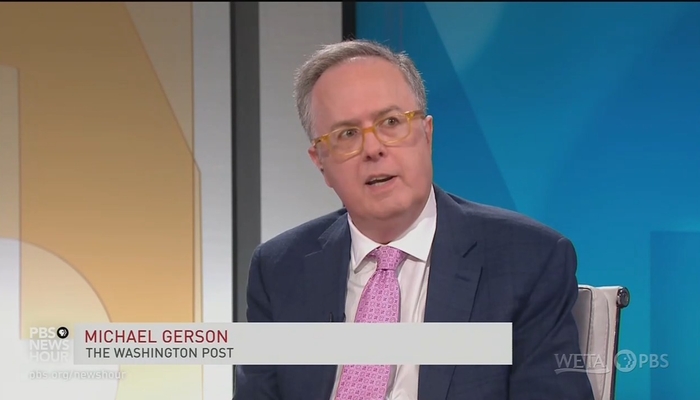 Again on Friday, supposedly Republican Washington Post columnist Michael Gerson is in an energetic competition with his liberal Post colleague Jonathan Capehart to see which one can sound more like a liberal Democrat. The main topic was Governors Greg Abbott and Ron DeSantis sending illegal immigrants to liberal cities which claim to be “sanctuary cities” and in this week’s case, the uber-wealthy island of Martha’s Vineyard.

Capehart’s clearly been there and appreciates its claims to liberal values: “There’s a sign that I have seen on the Vineyard since at least 2019-2020 that reads, “We respect women. We value Black lives. We stand with our LGBTQ community members. We stand with immigrants, with refugees with indigenous peoples,” just saying to the folks who visit Martha’s Vineyard that you are in a community that prizes diversity and prizes humanity. And that’s not what we have seen from Abbott or DeSantis.”

This came after the DeSantis shipment of migrants was quickly shipped off the island like so much riff-raff. Then Gerson doubled down:

JUDY WOODRUFF, anchor: Does this get us any closer, Michael, to some solution to all this?

MICHAEL GERSON: Goodness, no. It’s a big thing in MAGA world to own the libs. And that means essentially mocking them in ways that make them look bad. And this is a case where you had a governor in the United States trying to own the libs with human beings as his method. That, I think, is — these states were once known as laboratories of democracy, laboratories of policy ideas. Now they’re laboratories of progressively worse inhumanity.

Just like a liberal, Gerson thinks liberals represent “humanity,” and it doesn’t matter how successful they are in border control or crime control or any kind of policy. He only lamented with Republicans, “we have not even reached the bottom of it yet, I don’t think.”

The former chief speechwriter for George W. Bush continued on this path on other issues. Woodruff shifted to the GOP rift over Sen. Lindsey Graham’s proposal for a national ban on abortion after 15 weeks. He acknowledged this would prohibit just a small number of abortions, but:

GERSON: What he’s doing is politically foolish. It complicates the lives of almost every one of his colleagues that’s running….This is a case where the polling is really bad when you look at, from the pro-life perspective, that people wanted to keep Roe v. Wade. But if you look at the polling about a 15-month (sic) ban, it’s just about even in several polls in America, where’s their support. I think that Graham knows that and thinks this is the way it should be argued. But it’s — it also is a political disaster for Republicans.

Abortions after 15 weeks never show “progressively worse inhumanity,” apparently. Then, when it came to Biden, Gerson touted him as successful!

GERSON:  There’s some fairly bad news on inflation, but you still have unbelievably low unemployment in America. That’s actually part of the problem, a tight labor market that increases inflation. He — Biden is, to some extent, the least popular, most successful president I know of. But even the popularity has come up a few points in the last few weeks.

So I think he’s looking to try to build on that success, create the appearance of competence and progress. And it actually is working, to some extent. I think that, among independents, you see some movement, not Republicans, but…

The double-liberal panel on PBS NewsHour is brought to you by…you, the American taxpayer.