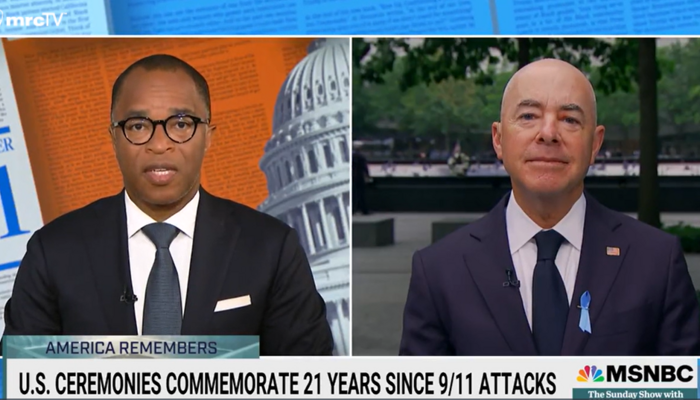 What is the Department of Homeland Security doing online in the wake of the death of its failed Disinformation Governance Board? It’s trying to resurrect its remains and make something worse. Targeting Homeland Security Secretary Alejandro Mayorkas said that his entire agency would target the “emerging threat” of “anti-government sentiment” during MSNBC’s The Sunday Show with Jonathan Capehart on Sept. 11.

Mayorkas’s interview Sunday reflected the core sentiments of a Homeland Security Advisory Council report that flagged “domestic violent extremism” as a leading focus area for the Biden administration’s counter-disinformation work after the official termination of the Disinformation Governance Board (DGB) on Aug. 24.

Mayorkas’ chilling statements come after President Joe Biden declared during his notorious Sept. 1 “‘Blood Red’” speech that “MAGA Republicans represent an extremism that threatens the very foundations of our republic.”

“Now we are seeing an emerging threat, of course, over the last several years, of the domestic violent extremist: The individual here in the United States radicalized to violence by a foreign terrorist ideology, but also an ideology of hate, anti-government sentiment, false narratives propagating on online platforms, even personal grievances,” Mayorkas said.

Mayorkas exploited the 9/11 terror attacks to harrumph that the “threat landscape has evolved considerably” over the last 20 years. The U.S.’s primary terror-related focus has changed over that time from foreign to domestic actors, Mayorkas said.

“We have a Center for Prevention Programs and Partnerships to address the threat of domestic violent extremism,” Mayorkas said.

The center, also known as CP3, is designed to leverage “behavioral threat assessment and management tools” and address “early-risk factors that can lead to radicalization to violence,” DHS wrote in a May 2021 press release announcing CP3’s creation.

In February 2021, Mayorkas designated combating “domestic violent extremism” as a “National Priority Area” for the first time in Federal Emergency Management Agency grant programs, DHS noted in the release. Because of this, state, local, tribal and territorial governments must spend at least 7.5 percent, or a minimum of $77 million, of DHS grant awards toward combating threats posed by “domestic violent extremists.”

“We’ve grown our grant funds working in partnership with state, local, tribal, territorial governments,” Mayorkas said during the MSNBC interview. “We’ve grown along with that threat because it is our obligation to do so, to make sure that the American people are safe and secure regardless of the nature of the threat that we confront.”

Agents have recently been pressured by the Biden administration to reclassify cases as “domestic violent extremism” investigations despite many cases not meeting the necessary criteria, according to alleged whistleblowers within the FBI.

Hurricane Ian set to hit Florida after knocking out power for whole of Cuba
Mother Sells Her Six-Year-Old Daughter For Sex, Gets 23 Years In Prison
‘It crushed us’: Florida ravaged by Hurricane Ian – and now it’s set to make landfall again
Jordan Peterson tears up after Olivia Wilde mocks him as hero of ‘incel community’: ‘I thought the marginalized were supposed to have a voice’
NY Times: ‘Failing’ Jewish Schools, But Memorizing Koran ‘the Way to Heaven’