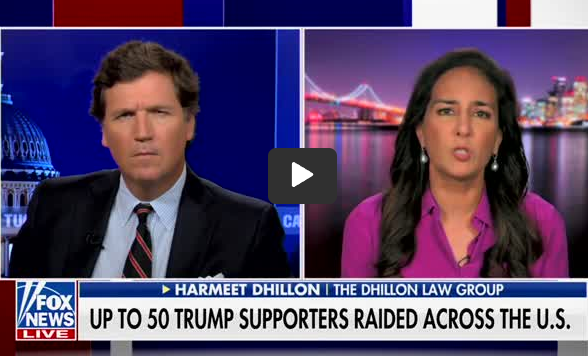 “The truth is that a few days ago, a political reporter called several people and said, ‘Hey, have you heard or been served yet? The FBI will be serving 50 approximately search warrants or subpoenas on Trump supporters,’ and then, you know, within 24 hours of that, two of our clients, three of our clients actually did either get search warrants or subpoenas, and the subpoenas are extremely broad,” Harmeet Dhillon of the Dhillon Law Group told Fox News host Tucker Carlson.

New York Times reporter Maggie Haberman posted a link to her article about the searches on Twitter. Two of Trump’s top political advisors, Brian Jack and Stephen Miller, were among those served, according to The New York Times.

“They’re from the Capitol siege section of the Department of Justice D.C. office, and ask for broad categories of documents. They ask for all communications dating from a month before the election until a month – two months after the election,” Dhillon continued. “They ask for all communications regarding dozens of people, and the categories are alternate electors, fundraising around irregularities around the election, and also a rally that happened before the Jan. 6 situation at the Capitol.”

Dhillon slammed the Justice Department, claiming it was seeing to “instill fear” into supporters of the former president.

“Most of this activity, if not all of it, is protected by the First Amendment and the United States Department of Justice is telling reporters about the search warrants and subpoenas before they’re executed. There’s no other explanation for this, and I think the reason for this is to instill fear into Donald Trump supporters and into those who would challenge election irregularities right before an upcoming election, Tucker. This is really outrageous abuse by the DOJ and it is illegal for the DOJ to leak this information to the media, Tucker,” Dhillon said.

Republicans criticized the Justice Department and FBI after the Aug. 8 raid on Mar-a-Lago, the Florida estate owned by Trump, calling it an “abuse of power” by the Biden administration.

The Justice Department did not immediately respond to a request for comment from the Daily Caller News Foundation.

BIDEN ECONOMY: And Now the Housing Market Tanks
Why Can’t All Republicans Be More Like Ron DeSantis?
Italy May Lead Europe in a Massive Turn to the Right
HMS Queen Elizabeth anchors in New York as Liz Truss says she wants to strengthen UK-US bond
Bill Barr Confronted Over Refusal To Help Jan 6th Prisoners