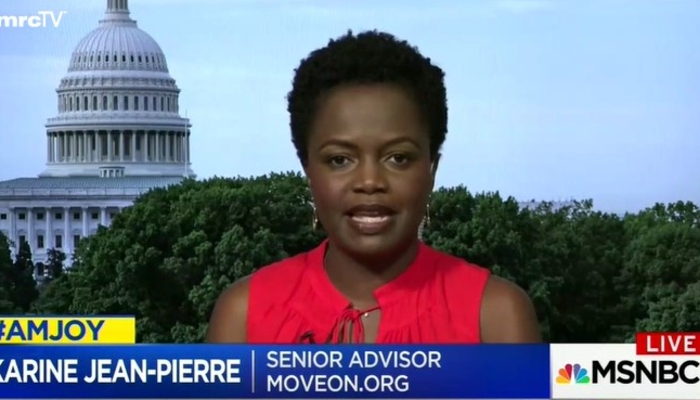 Joe Biden’s Press Secretary, Karine Jean-Pierre, this week tried to spin away the fact that she was an election denier, insisting that Donald Trump wasn’t elected President, that Brian Kemp wasn’t elected governor in Georgia. But a look back at Jean-Pierre’s time on MSNBC shows a tendency to lash out with vulgar attacks on Republicans.

On October 21, 2017, Jean-Pierre, then a spokeswoman for the radical MoveOn.org, appeared on AM Joy, and accused Donald Trump of “defecating on women”:

And the thing that is even crazier than that is that he now sits behind the resolute desk in the Oval Office essentially defecating on women, signing executive orders, taking away rights from women.

Activist Jean-Pierre accused the Trump administration of seeking out black women to “take down.”

For every Trump controversy, there seems to be a black woman that this administration wants to take down publicly, dehumanize, and really just try to destroy. And it’s incredibly dangerous, troubling and disgusting. You have April Ryan, you have Susan Rice, you have Jemele Hill, you have Maxine Waters, and now you have Frederica Wilson. This is what this administration continues to do because they’re so afraid of powerful black women. And so that is how they cover up their controversies by finding one that they can take down.

In November of 2017, Jean-Pierre again appeared on MSNBC and slimed then-Senator Jeff Sessions as a “racist” who is “living his best bigoted life.”

The revolving door between radical MSNBC analyst and Biden White House Press Secretary shows just how little difference there really is between the two leftist outfits.

For more examples from our flashback series, which we call the NewsBusters Time Machine, go here.

He Is Not Just Bad, He Is Destroying Us
Did Jean-Pierre just ADMIT the Biden admin has been flying migrants across the country ‘since day one’?
Elton in tears as Biden surprises him with medal at White House gig
Desperate Blue City To Hire Civilians Amid Police Shortage, Violent Crime Spike
Chuck Todd asks Nancy Mace if a GOP House majority would impeach Biden — is literally WOWED by her response