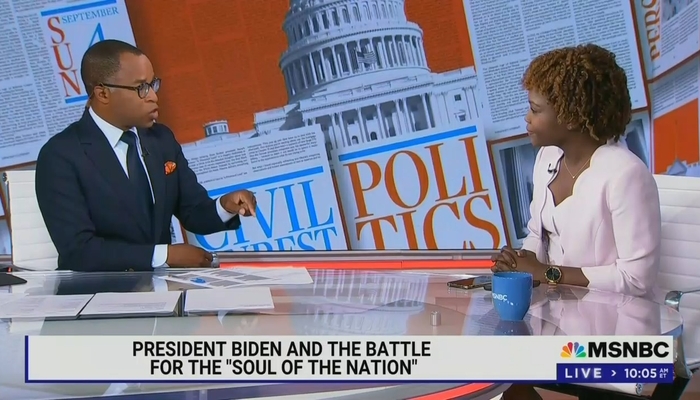 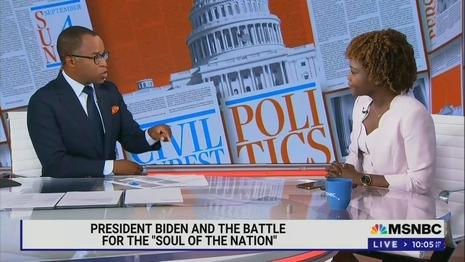 If Sunday comes around and you’re missing that syrupy Brian Stelter softball interview, there’s always Jonathan Capehart. He led off his Sunday show with an eleven-minute softball interview with Biden press secretary Karine Jean-Pierre and didn’t ask her about her preposterous claims that Biden’s Independence Hall speech was going to be “optimistic” and not political.

Fox News noticed he didn’t ask anything about Jean-Pierre telling Peter Doocy during a briefing that illegal immigrants didn’t “walk across” the border.

It wasn’t quite Stelter supinely asking Jen Psaki what the media were doing wrong. But Capehart began by asking if Biden was dissatisfied by local government’s performance in the water crisis in Jackson, Mississippi.

Then came the speech portion. He asked “At this point is there a difference between traditional mainstream Republicans and those who follow Donald Trump?” As KJP rolled out a long answer, Capehart swallowed his water wrong and choked. He wasn’t choking at the answer. “I don’t want you to pass out,” she said.

Capehart’s strongest complaint, naturally, was that Biden had waited too long to uncork on the Republicans, as if comparing them to segregationists and “Jim Crow 2.0” was milquetoast stuff.

CAPEHART: I have long said that the present is never more clear than when he is talking about the soul of the nation.

CAPEHART: And that’s what this speech was. But! I am wondering why it took the president so long to go there. To name names. The president’s really good friend, Senator Chris Coons, also from Delaware, told The Washington Post, quote, “it was only reluctantly that he chose to give such a clear and forceful warning about what lies ahead.” Does that explain it?

This gave Jean-Pierre the opportunity to say Biden’s been denouncing the Trumpers since the Charlottesville rioting in 2017, just as he’s now denouncing the rollback of abortion rights (as “devout Catholic” presidents apparently do).

Finally, Capehart mentioned the criticism of House Minority Leader Kevin McCarthy. “He said he owes half the country an apology. Does the president?”

Jean-Pierre repeated her insistence (from the coughing part of the interview) that people should watch the speech or read a transcript, like it’s a classic.

Then Capehart if inflation is going to continue to come down. He asked what the government can do to pressure universities to control tuition increases, and then about COVID: “Is the president worried that the country has lost the motivation to get boosted? To get vaccinated? Since less than half the country has received any type of booster.”

Capehart’s softball interview with the president’s press secretary was made possible in part by Wayfair.