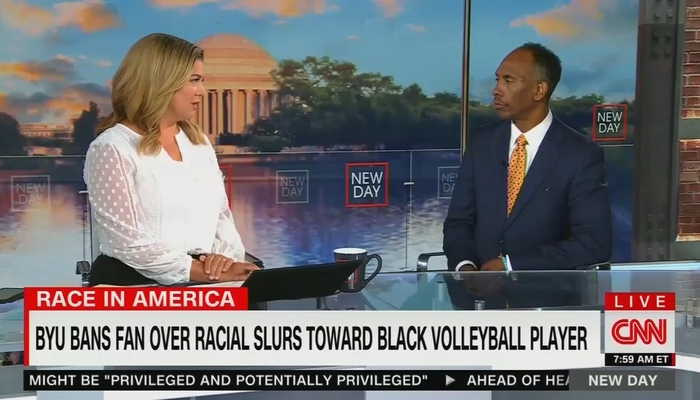 Earlier this week, CNN, ABC, PBS and ESPN all promoted another racism story that appears to be a hoax, this time in response to claims that a black Duke University student was harassed with racial epithets as she played volleyball at Brigham Young University in Utah over the weekend.

Between last Sunday and Monday, five different shows on CNN devoted segments to the controversy, totaling almost 24 full minutes, but have so far not updated the story as more details have cast doubt on whether the incident actually happened.

Last Sunday afternoon, Jim Acosta set up the story by recalling: “A Duke volleyball player is speaking out after she and other black teammates were called racist slurs and threatened during a match against Brigham Young University on Friday.”

Before discussing the matter with former NAACP president Cornell William Brooks, Acosta then read from a statement by Duke student Rachel Richardson who claimed that she was the victim of “slurs and comments” that “grew into threats,” and accused university officials of not protecting her during the game in spite of her complaining about the alleged activity. The CNN host then tied in a godmother of Ms. Richardson — Lesa Pamplin – as he added: “Richardson’s godmother tweeted that her goddaughter was called the N word every time she served, and that a white man told her to watch her back as she walked back to the team bus.”

It has since been reported not only that a police officer who was on scene observed no evidence that the harassment happened, but analysis of video footage by university staff found no evidence that the activity occurred. Furthermore, the student’s godmother who helped spread the accusations is an aspiring politician in Fort Worth who has a history of using her Twitter page to make incendiary attacks on white people.

Even though CNN host Blackwell promised on Monday that there would be updates on the story, so far the network has not revisited the controversy to inform viewers that the accusations now appear to be without merit.

ABC’s Good Morning America gave the story three minutes on Tuesday, including clips of a pre-recorded interview with Ms. Richardson, ESPN’s First Look featured a wild rant about the subject on Monday’s show, and PBS News Weekend ran a brief on Sunday.

On Wednesday night, Fox’s The Ingraham Angle notably did a segment on the revelations that the case appears to be a hoax in spite of all the media coverage it received.

This latest divisive line of reports were paid for in part by Energizer and ClearChoice on CNN and by Dick’s Sporting Goods on ABC. Their contact information is linked. Let them know how you feel about them funding such programming.

JIM ACOSTA: A Duke volleyball player is speaking out after she and other black teammates were called racist slurs and threatened during a match against Brigham Young University on Friday. Rachel Richardson wrote in a statement, in part: “Friday night in our match against Brigham Young University, my fellow African American teammates and I were targeted and racially heckled throughout the entirety of the match. The slurs and comments grew into threats which caused us to feel unsafe. Both the officials and BYU coaching staff were made aware of the incident during the game but failed to take the necessary steps to stop the unacceptable behavior and create a safe environment. They also failed to adequately address the situation immediately following the game when it was brought to their attention again. No athlete, regardless of their race, should ever be subject to such hostile conditions.”

Richardson’s godmother tweeted that her goddaughter was called the N word every time she served, and that a white man told her to watch her back as she walked back to the team bus. Just terrible behavior. Brigham Young athletics apologized for the incident, and saying the fan has been banned from all BYU athletic venues. And with me now to talk about this is former president and CEO of the NAACP, Cornell William Brooks. Cornell, thank you so much for talking about this. I know we scrambled to get you at the last second, but this is so critically important to talk about. We are 75 years after Jackie Robinson broke the color barrier in baseball. Why are athletes still having to deal with this? And I guess: What’s your reaction to what happened?

GEOFF BENNETT: Brigham Young University has banned a white male spectator from ever entering any of the school’s athletic venues after he threatened and shouted racial slurs at a Duke women’s volleyball player. She’s the only black starter on the team. Today she took to Twitter and stated that BYU coaching staff and officials, quote, “failed to take the necessary steps to stop the unacceptable behavior and create a safe environment.”

BRANNA KEILAR: A division one volleyball match at Brigham Young University turned really ugly when black players from Duke University endured racial slurs from at least one fan in the crowd. In a letter posted on Twitter, Rachel Richardson — a starter on Duke’s volleyball team — wrote this: “In our match against Brigham Young University, my fellow African American teammates and I were targeted and racially heckled throughout the entirety of the match. The slurs and comments grew into threats which caused us to feel unsafe. Both the officials and BYU coaching staff were made aware of the incident during the game, but failed to take the necessary steps to stop the unacceptable behavior and create a safe environment. As a result, but teammates and I had to struggle just to get through the rest of the game.”

BYU officials have issued an apology and banned that one particular spectator that they identified from attending events at any of its venues. Joining me now is Marvin Richardson. He’s the father of Duke University volleyball athlete Rachel Richardson. Marvin, thank you for being with us. So sorry for what your daughter has had to endure here, but tell us about this. You were watching this match on television — had no idea what was gong on until Rachel called you. What did she tell you?

ANA CABRERA: A Duke volleyball player says racist slurs turned to threats during a game at Brigham Young University on Friday, and that officials failed to take swift action. BYU has now apologized and says the abusive fan has been banned, but Rachel Richardson — the only black starter on the Duke team — says BYU should have done more sooner. CNN’s Dianne Gallagher joins us with more of this. Dianne, what more are we hearing from Richardson and her family?

DANNE GALLAGHER: Hey, you know, Ana, that’s the key here. it’s not just the abhorrent racist attacks that Rachel Richardson and her fellow African American volleyball players endured, but it was the fact that she says that the coaching staff of BYU and the officials were notified of it during the game, and nothing was done to stop it in its tracks. She says they notified them once again after the match was completed, and adequate steps were not taken to make them feel safe. Her godmother says Rachel Richardson was called the N word each time she stepped up to serve. And Richardson herself says that they endured slurs and attacks that progressed into racist threats that made her afraid and made them feel unsafe during the match there.

DON LEMON: The athletic director of Brigham Young University admitted today that much more should have been done when officials became aware of a black player on Duke’s women’s volleyball team who was taunted by racist slurs during a match against BYU. This was on Friday. Her name is Rachel Richardson. She says that the barrage of insults caused her and fellow black players to feel unsafe and that NYU officials did not take adequate steps to stop the taunting. BYU says one person has now been banned from the athletic event. Richardson was not only called the N word every time she served n the game against BYU, she was threatened, and she says she was made to feel unsafe in a crowded gym. What happened in this game?

CARI CHAMPION, CNN CONTRIBUTOR: Unfortunately, we live in a world where — and athletes are being more vocal about it — where we see a lot of fans — and I’m not saying this one particular fan represented BYU because that would be unfair — but we’re seeing fans who are very bold or are emboldened perhaps by the very polarizing times in which we live in…

CECELIA VEGA: We’re going to turn now to the Duke University volleyball player demanding answers this morning, saying she was a target of racist taunts during a match in Utah. This morning, she’s telling her story, and Janai Norman is here with more on this. Janai, good morning

JANAI NORMAN: Hey, guys. Good morning. So, listen, classes started yesterday at Duke, so when I spoke with Rachel Richardson last night, she said she’d shoved the experience in the back of her mind and focused on school and volleyball. She is a student athlete but realizes that when people see her, she’s a black woman first. And she’s hoping the racism she endured on the court can be a teaching moment for folks off the court. New fallout this morning from the volleyball court.

RACHEL RICHARDSON, DUKE UNIVERSITY STUDENT: Well, at first, it was kind of like, “Did I heard that right? I didn’t really believe it.

NORMAN: Duke sophomore Rachel Richardson says she and her black teammates were targeted with racial slurs and threats during the game against rival BYU over the weekend.

RICHARDSON: Next time I went back to serve,  I was like, “Yup, definitely heard that right.” I immediately just told one of my most trusted teammates –  was like, “I just heard someone use a racial slur like to address me essentially.”

NORMAN: Richardson taking to Twitter saying the heckling lasted for the entre match, and when it turned to threats, they began to feel unsafe. She says: “Both the officials and BYU coaching staff were made aware of the incident during the game, but failed to take the necessary steps to stop the unacceptable behavior and create a safe environment.”

BYU confirming that the fan accused of launching those attacks is not a student, and that they are now permanently banned by BYU.

RICHARDSON: Even if, as they say, it wasn’t a student that was doing this, there were students nearby. And so the fact that they didn’t know what to do in the moment to call him out or to let him know, “That’s not accepted here — you need to stop, like, that’s not wanted here,’  You see a level of ignorance. So there’s a lack of knowledge on racism and how to deal with it. That’s how you have things like this continue to happen.

The union push could face a big obstacle in 2023 if the economy falls into a recession
New Amazon Device Tracks Breath Patterns While Sleeping
How Childhood Experiences and Beliefs Can Shape Gender Identity
Christian Pastor John MacArthur issues scathing rebuke of California Gov. Gavin Newsom for running pro-choice billboards, urges the leader to turn to Christ
Benefits of Biden’s Student Loan Forgiveness Will Overwhelmingly Go to the Wealthy