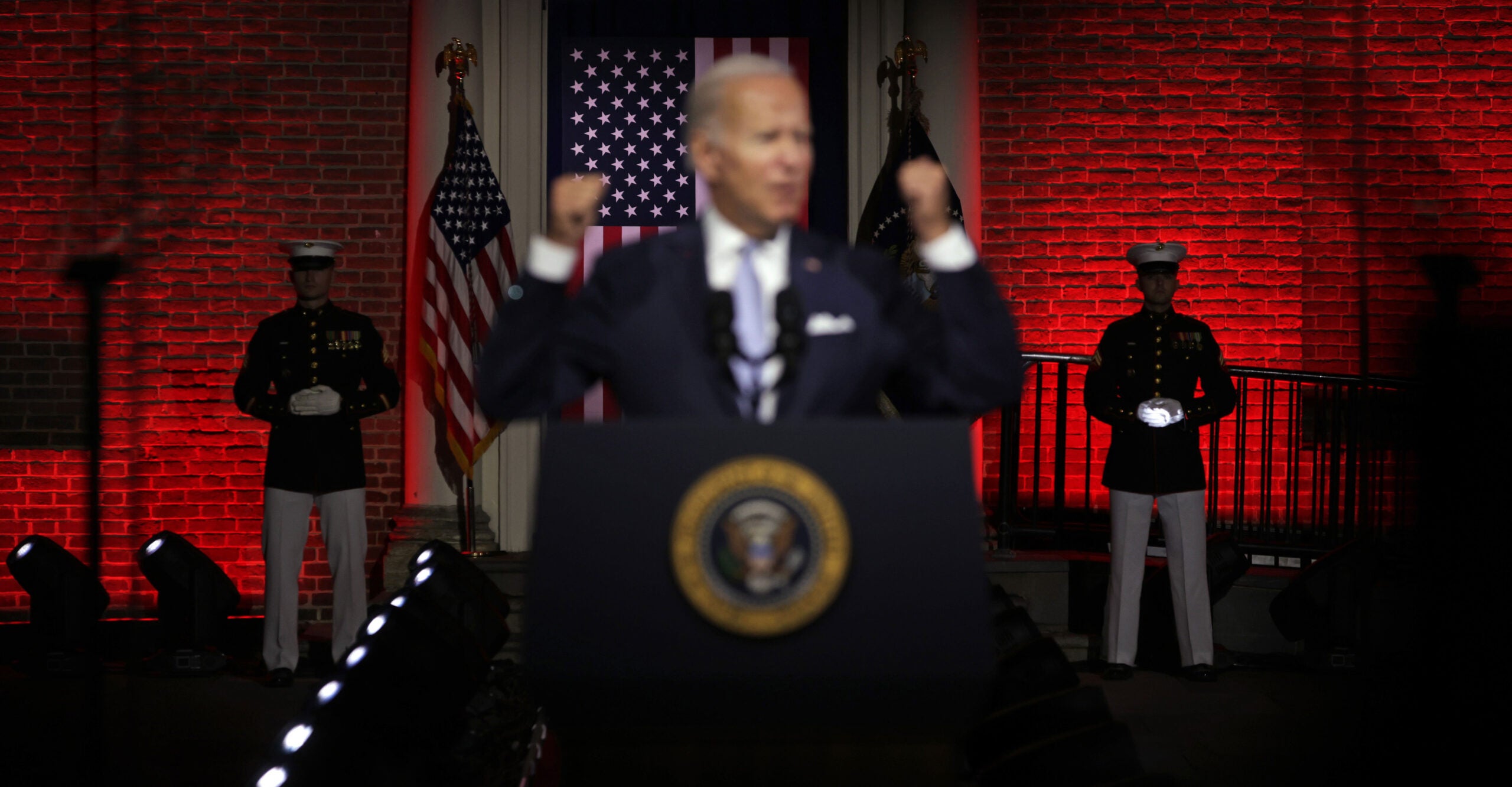 President Joe Biden confirmed on Thursday night that if you oppose him, you are an extremist who hates democracy.

Flanked by two members of the military and illuminated on a podium in blood-red lighting, Biden spent half an hour blasting his political opponents in a prime-time address to the nation.

Biden, who delivered his rant in front of Independence Hall in Philadelphia, defined his political opponents—the “MAGA Republicans”—as illegitimate monsters, a rich statement to make just weeks after the FBI raided the home of former President Donald Trump, the man who opposed him in the last election.

Though Biden stumbled and coughed through some of his early lines, his message was clear: People who oppose and disagree with his administration are against democracy.

Biden never really got around to the important issues that most Americans are concerned about right now. He said nothing about the runaway inflation, the economy, the border crisis, or any of that—just a long string of invectives against his political opponents followed up by statements about “unity” and “hope.”

“As I stand here tonight, equality and democracy are under assault,” Biden said. “We do ourselves no favors to pretend otherwise.”

The president then smeared his political foes as an existential threat to the country: “Too much of what’s happening in our country today is not normal. Donald Trump and the MAGA Republicans represent an extremism that threatens the very foundations of our republic.”

So, what Americans represent unacceptable extremism?

Earlier in the day, Biden’s Press Secretary Karine Jean-Pierre had the answer.

“When you are not with where majority of Americans are, then you know, that is extreme.”

Since Biden is deeply underwater in the polls, this administration must be defining the “majority” differently.

Of course, Biden wasn’t so vociferous and animated when the “mostly peaceful protests,” turned riots destroyed large sections of American cities in 2020. That’s different, of course. When riots happen in the name of Black Lives Matter or when Antifa—which Biden defined as no more than an “idea”—smashes businesses, well that’s just people getting a little carried away.

Biden spent much of his time saying that those who question elections are basically against democracy. Almost laughably, he said that his political opponents are against the Constitution. It’s a remarkable contention given that he just unilaterally declared student loan forgiveness, spending billions of dollars, with dubious constitutional authority.

Ignoring the Constitution is only bad when other people do it, I guess.

“Donald Trump and MAGA Republicans represent an extremism that threatens the very republic,” Biden said. “Democracy cannot survive when one side believes there are only two outcomes to an election: either they win or they were cheated.”

Is that so? What an interesting take from the leader of a party that’s had a significant faction question the electoral legitimacy of every Republican presidential win since 2000.

In fact, this was the president’s own press secretary after the 2016 election.

Is the press secretary a threat to democracy or is it just the president’s opponents?

As caustic and at times unhinged Biden’s speech was, it was important in understanding what this administration defines as extreme and intolerable: Basically, anyone who opposes them.

It was a fiery speech delivered to activists in his base. His attempts to inject words about unity came off as entirely unserious.

“MAGA Republicans have made their choice, they embrace anger. They thrive on chaos. They live not in the light of truth but in the shadow of lies,” Biden said.

You heard that? Biden isn’t just saying that his former electoral opponent is bad, he’s saying those who supported him are bad and that they’ve “made their choice.”

It’s as if the words of unity were sprinkled into the speech to justify punitive actions toward political opponents.

While most Americans may not have heard Biden’s speech—many were probably watching college football instead—it nevertheless summed up much of what the administration has stood for and will now lean into.

Biden said during his speech that his opponents “promote authoritarian leaders and they fan the flames of political violence.”

On Thursday night, it was Biden who sounded like an authoritarian.

If you stand in opposition to his regime, Biden defines you as a threat to the country. So, now what will he do?

Biden certainly isn’t an Abraham Lincoln, who called on Americans to embrace the better angels of their nature. He’s not even a Jimmy Carter, who was simply an ineffective micromanager.

Increasingly Biden’s looking like a James Buchanan, pushing his country to the brink while insisting that only his opponents are extremists.

Chinese communist-fueled opioid crisis cost U.S. $1.47 trillion in 2020
House Republicans push bill that would nix IRS funding from the ‘Inflation Reduction Act’ and reallocate it for CBP to hire agents to secure the southern border
Despite Ian’s devastation, Florida’s architecture displays shocking resilience
ABC’s Jon Karl Argues With Rubio Over Hurricane Relief Spending
‘Rolling with laughter at the responses to this tweet’: Dean Cain calls it ‘utterly ridiculous’ that he had to wear a mask while flying to and from Canada