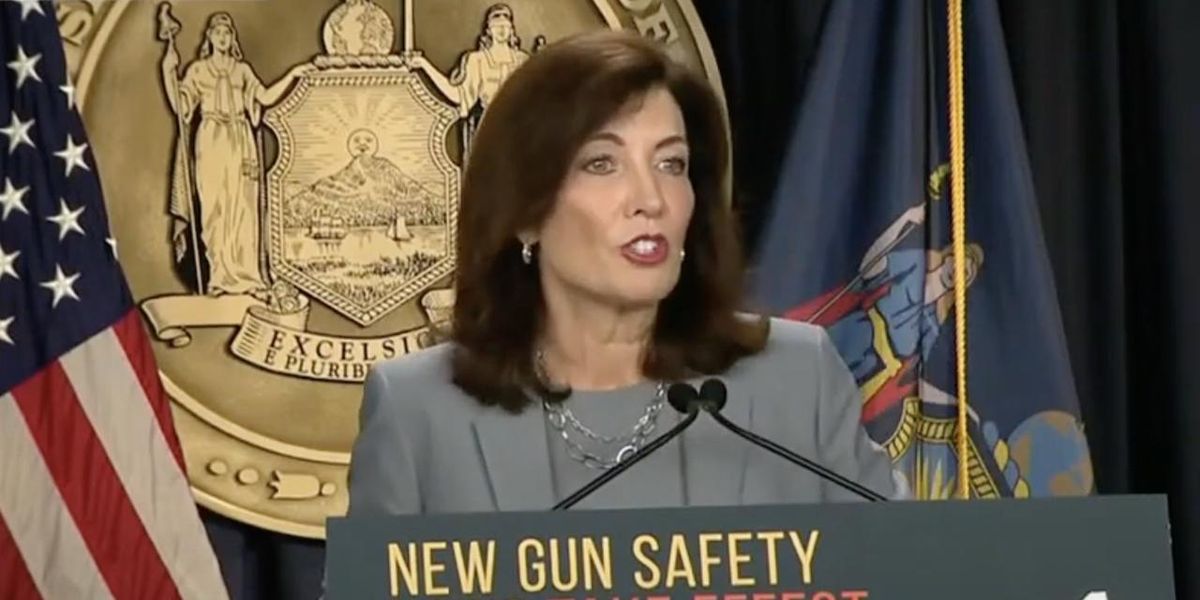 Far-left New York Gov. Kathy Hochul declared that the “theory” of a “good guy with a gun” being able to stop armed “bad guys” simply “doesn’t hold up” — and is “over,” Fox News reported.

The Democrat made her declaration at a Wednesday event celebrating the state’s implementation of stricter gun laws, the cable network said.

“This whole concept that a good guy with a gun will stop the bad guys with a gun — it doesn’t hold up,” Hochul said, according to Fox News. “And the data bears this out, so that theory is over.”

More from the cable network:

Her comments came amid the state rolling out new laws in response to the U.S. Supreme Court ruling earlier this year that New York’s regulations on obtaining a concealed carry permit were unconstitutionally restrictive.

According to Fox News, Hochul said the impetus for the legislation was the Supreme Court’s 6-3 decision in June, in which six Republican-appointed justices ruled that a 108-year-old New York law requiring gun owners to show they have “proper cause” before they can obtain a concealed carry license was unconstitutional on 14th Amendment grounds.

“The Supreme Court with all this data, with all this knowledge, with a law that was working just fine in our state, decide to take us backwards, possibly opening the door to more tragedies when people can carry guns concealed,” Hochul said, according to the cable network. She cited data that New York has fewer deaths by firearms per 100,000 population than states with looser gun laws, Fox News added.

“We’re not deterred. We didn’t back down. We stood up and fought back,” Hochul also said, according to the cable network.

New York City Mayor Eric Adams, also a Democrat, said Wednesday that “the U.S. Supreme Court’s … decision was the shot heard round the world that took dead aim at the safety of all New Yorkers,” Fox News noted.

“We will be posting signage at every entrance into Times Square informing those traveling through that the area is a gun-free zone and that licensed gun carriers and others may not enter with a gun unless otherwise specially authorized by law. As mayor of New York City and a former police officer, my top priority will always be the safety of all 8.8 million people who call this city home, so while the Supreme Court decision may have opened an additional river feeding the sea of gun violence, we are doing everything we can to dam it and keep New York the safest big city in America,” he added, according to the cable network.

Democrat Schemes Are Destroying The Second-Largest Investment American Families Have, Just When They Need It The Most
WAYNE ROOT: BIDEN IS NOT IN CHARGE. HERE IS EXACTLY WHAT’S HAPPENING.
GM delays return-to-office mandate after employee backlash
NewsBusters Podcast: A Buzzkill for the ‘Festival of Fact-Checking’
6 States Sue to Block Biden’s Student Loan ‘Forgiveness’ Scheme