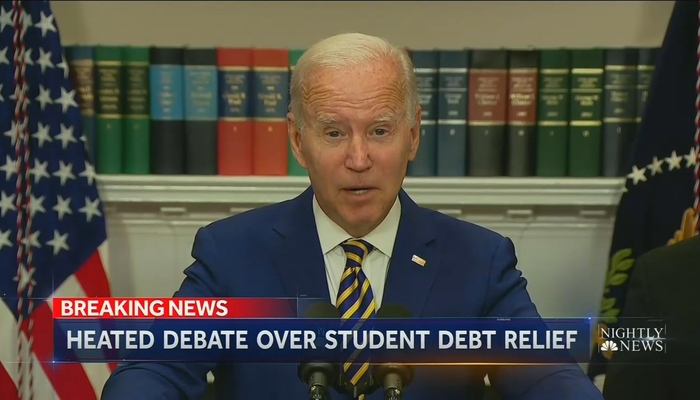 To reduce inflation, battle climate change, reduce gas prices, stem rising crime and to protect our southern border, President Joe Biden has forgiven $10,000 in federal student loans and extended $20,000 in debt cancellation to Pell Grant recipients for borrowers making less than $125,000 a year. A study by the University of Pennsylvania’s Wharton School found that “Between 69% and 73% of debt forgiven accrues to households in the top 60% of income distribution” and the total cost could reach $1 trillion.

Even many Democrats are outraged.

Jason Furman, chair of the Council of Economic Advisers under former President Barack Obama said: “I’ve been critical of student debt loan relief for the last two years, but the plan came in, frankly, much worse than I expected. It was supposed to be about $250 billion. I thought that was a bad idea, I expressed that. Instead, it’s probably about $500 billion. At this point in our economy, we really don’t need to be adding $500 billion of deficit spending for a purpose that frankly includes wealthy law students and business school graduates getting tens of thousands of dollars.”

Many of these grad school degree recipients work in jobs that do not even require college degrees, let alone advanced degrees from expensive colleges and universities. The cost of college has long exceeded the rate of inflation, primarily because of the availability of government money that creates an incentive to jack up tuition and hire more administrators lest the college lose millions of dollars. This will turbocharge the impetus to raise college admissions, never mind universities like those of the Ivy League with endowments substantial enough to admit students for free.

Hate to be a buzzkill, but is the debt forgiveness even legal?

Speaker Nancy Pelosi, on Aug. 24, 2022, said: “President Biden’s bold action is a strong step in Democrats’ fight to expand access to higher education and empower every American to reach fulfillment. By delivering historic targeted student debt relief to millions of borrowers, more working families will be able to meet their kitchen table needs.” But Pelosi on July 28, 2021, said: “People think that the president of the United States has the power for debt forgiveness. He does not. He can postpone. He can delay. But he does not have that power. That has to be an act of Congress.”

Charlie Rose, General Counsel, former Obama Department of Education, on May 7, 2021, agreed with Pelosi. Rose said: “If the issue is litigated, the more persuasive analyses tend to support the conclusion that the Executive Branch likely does not have the unilateral authority to engage in mass student debt cancellation.”

What, one might ask, about the suckers who paid off their student loans and the majority of Americans, many of whom are minorities, who never attended college? Let’s propose an addendum to the plan. Because most criminals will not benefit from student loan forgiveness, and to combat “systemic racism,” Biden should allow thieves of color and/or thieves from the LGBTQIA+ community to keep $10,000 worth of stolen goods, if taken from a white college graduate. Win-win.

Under the category of “you cannot make this up,” Harvard Law professor Laurence Tribe tweeted, “Good news for thousands of my former students. I’m grateful on their behalf, Mr. President.” In other words, the prof celebrates loan forgiveness for Harvard law grads, those most capable of paying off their own loans. Let’s hear it for reparations for rich white people! While we have the momentum — and since legal authority doesn’t seem to matter — let’s tackle forgiving credit card debt, car loans, rent, cellphone and cable TV payments, health insurance premiums, vision and dental payments, utility bills, private and parochial K-12 tuition, tattoos and nose rings.

Will O.J. Simpson write a letter to Biden requesting that his administration forgive the $96 million, which includes interest, that Simpson owes the Browns and the Goldmans for murdering their loved ones? Thinking outside the box here.

Finally, a quick question. If one’s mortgage “identifies” as student debt, will Biden forgive it? Asking for a friend.

Larry Elder is a best-selling author and nationally syndicated radio talk-show host. To find out more about Larry Elder, or become an “Elderado,” visit www.LarryElder.com. Follow Larry on Twitter @larryelder. To read features by other Creators Syndicate writers and cartoonists, visit the Creators Syndicate webpage at www.creators.com.

Three men charged with fraud in $100 million New Jersey deli scheme
‘Kansas doesn’t have a brand’: People sound off after Democratic NYC Mayor Eric Adams says that ‘New York has a brand,’ but Kansas does not
The Biden Family’s Creepy Obsession With Children
‘Take this very seriously’: Florida warned over Hurricane Ian as fuel and food stockpiled
‘It crushed us’: Florida ravaged by Hurricane Ian – and now it’s set to make landfall again