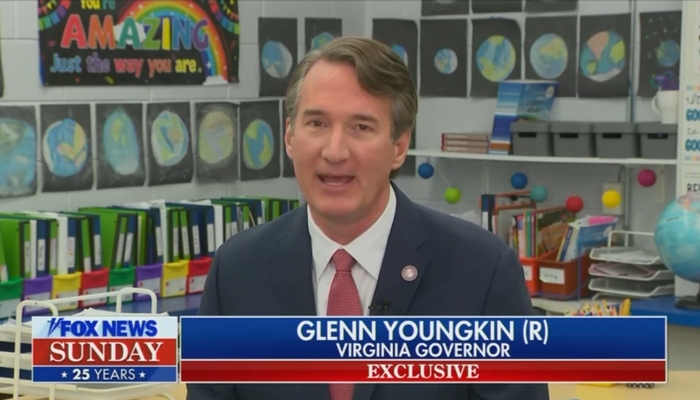 Richmond, VA – Virginia Governor Glenn Youngkin has been in office only seven months and already he is listed at number five in a Washington Post story about possible 2024 GOP presidential candidates.

In an interview, I asked him to respond to suggestions in some quarters that he might be well positioned to run for president in 2024. His answer sounds close to what could develop into a campaign speech: “What I find telling is that someone new on the political scene who, yes, turned a blue state red, who is delivering on promises made, who is conservative and believes in a larger group of Americans in the (Republican) party who embrace these American values that underpin our great nation … is all of a sudden in the national discussion around running for president.”

Would he support Donald Trump should he be the party’s nominee, a prospect that seems increasingly problematic given the former president’s deepening legal troubles.

Youngkin responds, “I am on the record that if Donald Trump is the nominee in 2024, I’ll support him.” He then adds a cautionary qualifier, “I think we have a long way to go from there.”

Youngkin’s record of accomplishments in such a short time is impressive. While some people are fleeing from high tax states run by Democrats, Youngkin and the legislature have cut state taxes by $4 billion, while reducing spending (he says his administration has spent $1.2 billion less than was appropriated) and created a $3.2 million surplus, much of which he wants to rebate to taxpayers. He’s got a good applause line for it: “The money belongs to Virginians; it doesn’t belong to the politicians, or to government.”

The Youngkin budget also includes $400 million to increase salaries for law enforcement officers, and $100 million to expand the type of institutes of higher education that can partner with K-12 systems or lab schools (also known as charter schools), an initiative he believes will help foster education innovation.

The education issue and the woke agenda imposed in many schools is what propelled him into office. Virginia has a limited school choice plan, which Youngkin wants to expand to include private and religious schools. “Parents don’t trust their public school system,” he contends. In addition to what is being taught in the classroom, sometimes without parental knowledge or consent, he cites a school counselor who had been arrested for soliciting sex from a minor in one Northern Virginia county, released and later arrested for soliciting sex from a minor in another county. “Or a young girl who was assaulted in one school and a young man is found guilty and they move him to another school where he assaults someone else. These are things that erode a sense of safety in our schools.” Not to mention school shootings.

Youngkin blames President Biden for creating the migrant crisis at the border. “To enable people to come into our country and then sort out whether they should be here is just wrong.” Speaking about the drug crisis, he adds, “We have record levels of drug overdoses in Virginia. Sixty percent of them are Fentanyl-related … every state in America has been impacted.”

Since the Supreme Court overturned Roe, some states are passing new laws restricting abortion, while others are protecting abortion rights. Asked about Virginia’s approach, Youngkin takes a pragmatic position: “I am a pro-life governor. I also recognize Virginia is going to be a tough place to pass legislation on abortion.” He supports a 15-week “pain threshold bill” because he says most Virginians – and polls show much of the country — favor restricting or banning late-term abortions. He says pro-lifers should turn around the “radical” label the other side uses against them and point out that the pro-choice side favors allowing abortions to the moment of birth. “That’s radical,” he says.

Youngkin will campaign for several Republican congressional candidates this fall. It could be a warm-up for something greater. Eight previous presidents were Virginians. Could Youngkin be number nine?

NPR Roots Against the NFL, Like It’s a Uniquely American Sickness
The Wrong Way to Respond to High Gas Prices: From Federal Gas Tax Holidays to Price Gouging Claims
Did Jean-Pierre just ADMIT the Biden admin has been flying migrants across the country ‘since day one’?
ABC, CBS, NBC, MSNBC, CNN Still Burying Political Murder of Republican Teen
Growing Up in Foster Care, Tori Hope Petersen Just Wanted the World to Know She Was ‘Not a Bad Kid’