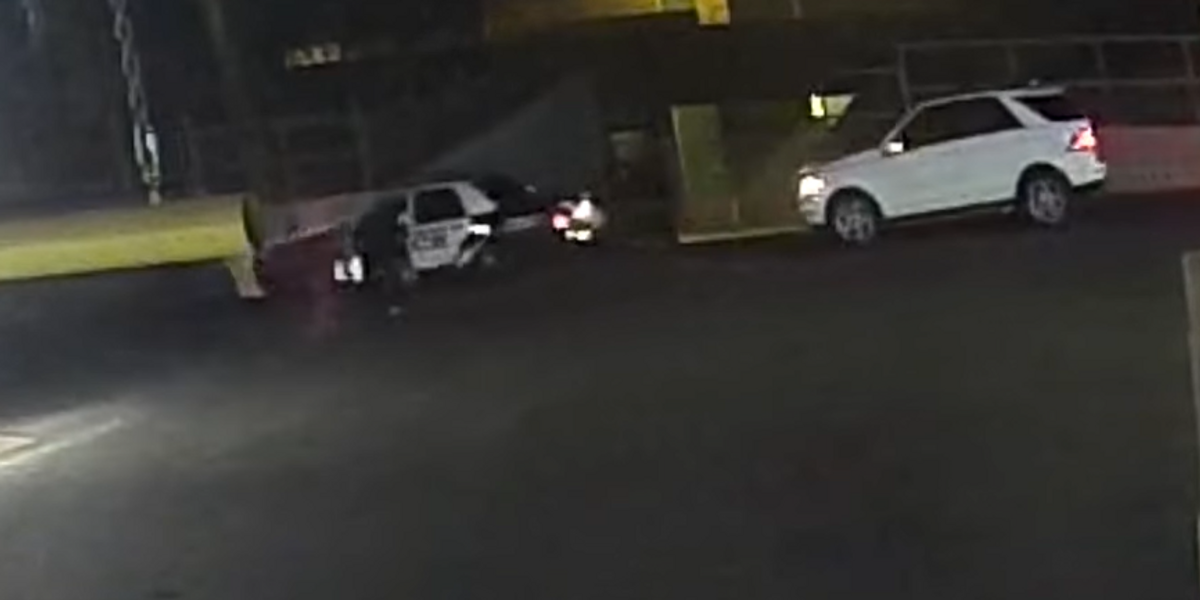 Bizarre video shows an Arizona woman storming into the headquarters of the Mesa Police Department by ramming a cop cruiser. Bodycam video shows the police officer engaging the female driver who had stalked the cop.

This week, the Mesa Police Department released bodycam footage and video from surveillance cameras from a wild “critical incident” that happened on July 9. Police released video to the public because there was an officer-involved shooting.

Around 9 p.m., an officer was driving and noticed that a white SUV had been following him for some time. The vehicle had its hazard lights flashing. The officer was dispatched to a call, but was more concerned about the driver’s intentions, so he drove back to the headquarters of the Mesa Police Department.

As he approaches the gate to the headquarters, the white SUV rams the police cruiser so it can infiltrate the gated facility.

Fearing for his safety, the officer barrel rolls out of his cop cruiser as the SUV bulldozes the car into a curb. The cop hits the pavement, rolls, and then draws his weapon and fires.

With his gun drawn, the officer scurries to take cover behind a forensics department van – where he encounters a crime scene specialist.

Bodycam video shows the woman exiting the SUV, and the officer fires several shots in her direction.

She falls to the ground and begins rolling towards the security gate. Backup officers arrive at the scene to apprehend and treat the suspect for her gunshot wound that is believed to occurred when the officer jumped out of the cruiser.

The suspect was later identified as 39-year-old Taneysha Shari Carter. She was taken to a local hospital and later released.

She was charged with aggravated assault with a dangerous instrument (her car) and third-degree trespass.

Arizona’s Family news previously reported, “Court documents said Carter told investigators she believes law enforcement, the military and a group she referred to as the Illuminati are trying to kill her. She claims she was trying to get the officer’s attention to tell him this information. Carter also said she thought the officer knew who she was.”

The outlet added that Mesa Police detained Carter in 2020 for mental health reasons.