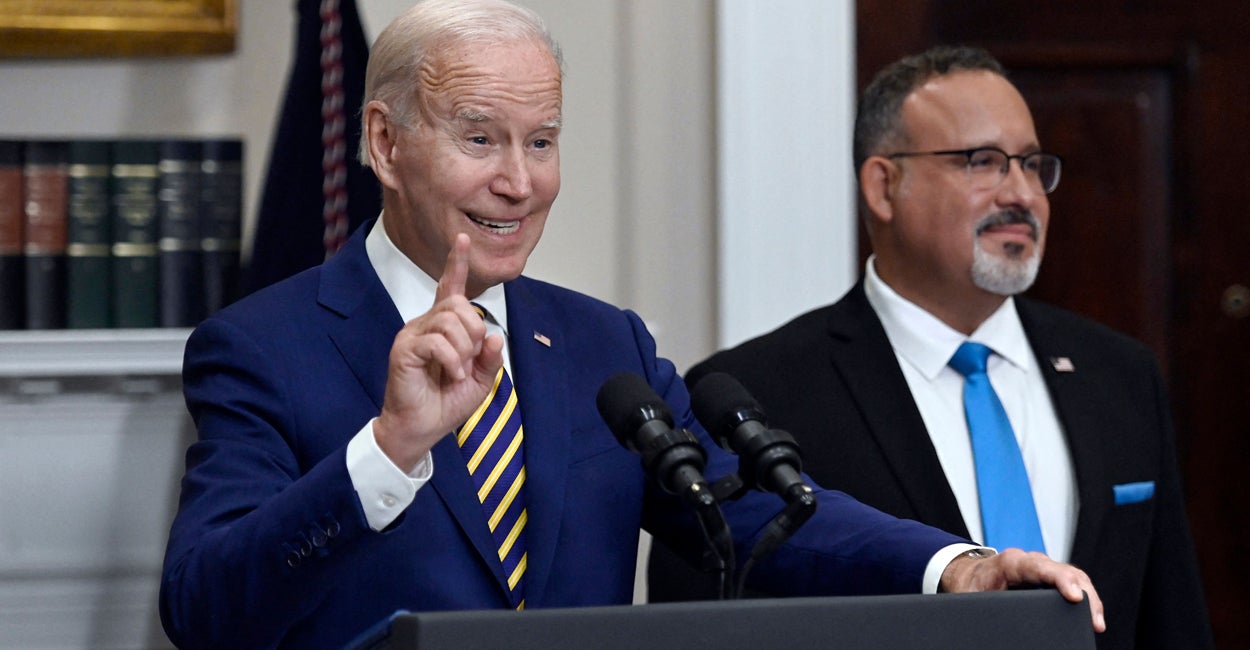 President Joe Biden announced Wednesday that he will launch a massive effort to “forgive” student loan debt for borrowers who still owe.

This plan isn’t just a bailout for well-off college degree holders. It’s a slap in the face for hardworking Americans.

It’s a slap in the face to the working-class father who dreamed of sending his daughter to college. He took on an extra shift at work, skipped vacations, and put off needed home repairs, all so that he could save every penny so that his daughter wouldn’t need to go into debt to go to school.

It’s a slap in the face for the recent college graduate who decided to live with three roommates and take the bus to work every day so that every extra dollar could be put toward getting himself out of student loan debt.

It’s a slap in the face for the high school graduate who decided to enlist in the military and take advantage of our country’s promise to him: You serve, we pay for your college.

With the swipe of a pen, Biden made a mockery of such sacrifices.

The Biden plan is estimated to cost American taxpayers roughly $300 billion at a time when they’re struggling to cope with record-high inflation.

Will officials make any changes to the federal student loan program to prevent future debt problems? Should future generations come to expect $10,000 worth of forgiveness? What is to stop colleges and universities from raising tuition in response to this move?

Green-lighting any level of loan forgiveness without first addressing the source of the student loan debt problem indicates a desire to win political points rather than a genuine interest in problem-solving.

In reality, forgiving student loan debt isn’t just bad public policy for failing to address the root causes of skyrocketing college tuition. It is also a sign of disrespect for most Americans and a reminder that the priority for policymakers in Washington is to assuage the elite at the expense of the working class.

A country that took seriously the impact of inflation on American families wouldn’t make the problem worse through poorly designed elitist handouts.

Fairness and responsibility have left the conversation when it comes to loan forgiveness, and those values have been replaced by greed and victimhood.

College is indeed too expensive, and for many it’s not worth it. Unfortunately, those who decided not to go into debt to attend college now will be forced to pay anyway.

The refusal to admit the obvious—that the federal student loan program has been a massive failure that drives up college prices—is nothing short of a betrayal of the American people.

Future generations will be encouraged to take on more debt, perpetuating an endless cycle of strain on our economy. The federal student loan program must be abolished to save regular Americans from perpetually paying the price of college degrees for the elite.

Former Iowa school counselor awarded $12 million after being wrongfully imprisoned
With GOP Support, House Takes First Big Step to Curb Power of Big Tech
The DOJ Is Even More Dangerous Than We Thought
Todd Excuses Biden’s ‘Where’s Jackie?’ Gaffe, Just a Mistake, ‘Move On’
An entire seafront levelled – no one expected Hurricane Ian to be so vicious and so damaging