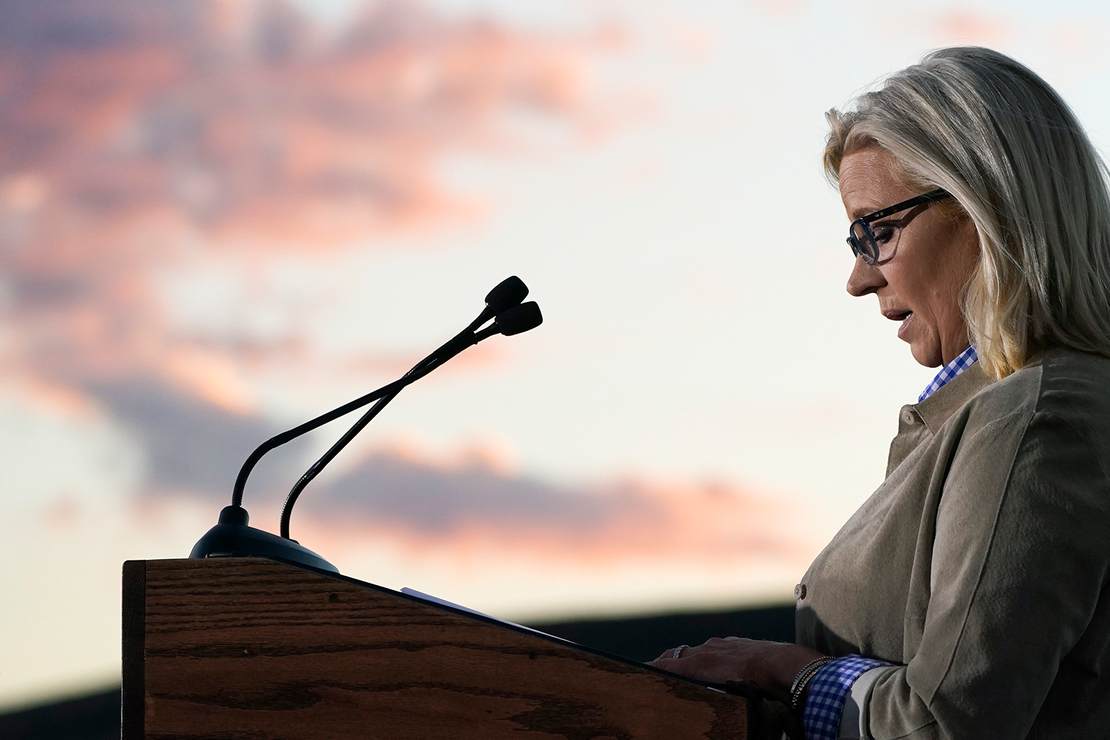 Outgoing Rep. Liz Cheney (R-Wyo.) said that she was “ashamed” of fellow Republicans like Sen. Ted Cruz (R-Texas) and Gov. Ron Desantis (R-Fla.), and declared them unfit for the presidency.

“Is the threat Trump or bigger than Trump? You could argue Trumpism, in terms of election denying, has taken over the party,” ABC News chief Washington correspondent Jonathan Karl asked her on Sunday.

“Donald Trump is certainly the center of the threat,” Cheney began, “but election denial, denying the fundamental function and principle, at the center of our constitutional republic is dangerous, broadly speaking.”

She continued, “He’s certainly leading that effort and leading that movement. He also, because we know precisely what he will do because he’s done it, sending an armed mob here to the Capitol to try to overturn the results of an election. There’s simply no way the nation can, in my view, sustain itself if we excuse that and put him in a position of power again.”

“You’re going to work against election deniers, if it’s not Trump and if it’s somebody like Ron DeSantis, Ted Cruz, Josh Hawley, these are all people who tied them closely to Trump, will you oppose them? Can you see yourself supporting any of them?” Karl asked.

“It would be very difficult,” she said. “When you look at somebody like Josh Hawley or Ted Cruz, both of whom know better, both of whom know exactly the role of Congress is in terms of our constitutional obligations with respect to presidential elections, and yet both of whom took steps that, that fundamentally threatened the constitutional order and structure in the aftermath of the last election. So, you know, in my view, they both have made themselves unfit for future office.”

“DeSantis, who is right now campaigning for election deniers, and I think that’s something that I think people have to have real pause about,” Cheney said. “Either you fundamentally believe in and support our constitutional structure, or you don’t.”

You know, prior to 2020, questioning the results of an election — what Cheney calls “election denial” — was a Democrat pastime. In fact, over sixty Democrats boycotted Trump’s inauguration, because they believed Trump colluded with Russia and stole the election.

“I will not be part of normalizing or legitimizing a man whose election may well have depended on the malicious foreign interference of Russia’s leaders,” said Rep. Don Beyer (D-Va.).

“I will not be attending the inauguration,” Rep. Dwight Evans (D-Pa.) declared on Twitter. “Russian hacking must be investigated and I do not support the repeal of ACA.”

“On Inauguration Day, I will not be celebrating. I will be organizing and preparing for resistance,” said Rep. Barbara Lee (D-Calif.).

We know that the Trump-Russia collusion was a hoax from the very beginning yet was treated seriously and legitimized by the media, and Democrats used those allegations to undermine Trump’s presidency. It was investigated by Congress and by a special counsel. They all came up with nothing.

Yet allegations of election irregularities were never given the same chance for investigation and scrutiny as the Russian collusion narrative. Liz Cheney should also know all about election denial because Democrats also denied the legitimacy of both the 2000 and 2004 elections — in which her father was elected and reelected as vice president of the United States. Many Democrats still claim that the 2000 election was “stolen” by the Bush team over the close election in the state of Florida. But, even in 2004, when the Bush-Cheney ticket won reelection handily, John Kerry’s advisors urged him to contest the results in Ohio over allegations of voting “irregularities” statewide.

According to the left, the conspiracy theory that Diebold voting machines had been secretly programmed to give Bush fraudulent votes persisted among Democrat activists and bloggers. There was never any evidence of this, but Rep. Stephanie Tubbs Jones (D-Ohio) and Sen. Barbara Boxer (D-Calif.) filed an objection (on behalf of a group of Democrats in Congress) to the counting of Ohio’s electoral votes and sought to delay certification of the 2004 presidential election results. As recently as 2018, John Kerry said that he still believes that Bush stole the election from him.

Questioning the results of elections is nothing new. Democrats have done it for years with impunity. Yet questioning the results of the 2020 election, despite all we know about irregularities and shenanigans in battleground states in that election, is treated differently from the other times, and Liz Cheney takes the side of Democrats. According to her, any Republican who dares to ask questions about the security of that election is a threat to our democracy, but Democrats, who believe Trump stole the 2016 election, and that her dad stole the 2000 and 2004 elections, are not.

Go home, Liz. You sound like a drunk Democrat.