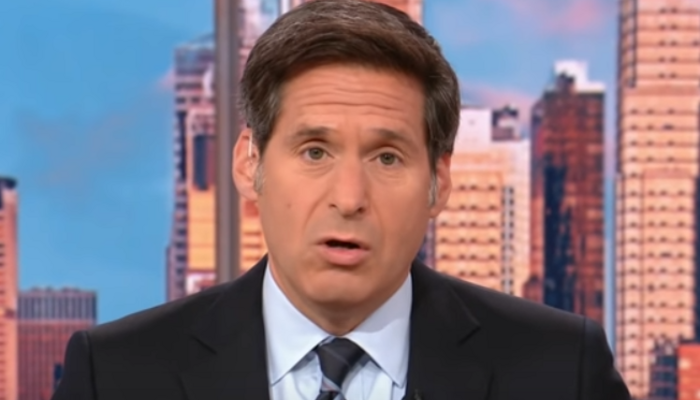 CNN is apparently desperate to convince Americans to stop taking the glass-half-empty view of absurdly high gas prices that declined somewhat. Look on the bright side, says CNN: think of the small gas price dip as a $100-a-month raise instead! 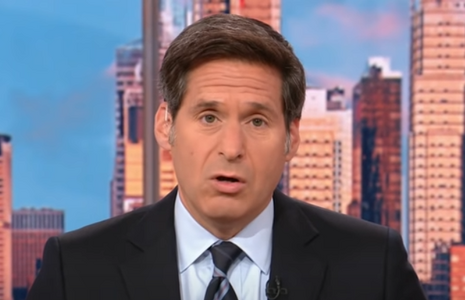 “Next time you stop at a gas station, think of it as a $100-a-month tax cut. Or a maybe $100-a-month raise,” CNN tweeted to its over 59 million followers on Aug. 19. The original CNN Business Senior Writer Chris Isidore’s propaganda piece was headlined: “America just got a $100-a-month raise.” CNN’s tweet was massively ratioed with over a whopping 7,100 comments and only over 980 likes so far. Isidore put a hefty spin on the minor drop in gas prices from $5.02 in June to $3.92: “The steady drop in gas prices over the last few months has turned into an unexpected form of economic stimulus.” In Isidore’s absurd logic, “Since the typical US household uses about 90 gallons of gas a month, the $1.10 drop in prices equals a savings of $98.82.” Yikes.

Newsflash for Isidore: the national average price for a gallon of gas on the day President Joe Biden took office on January 20, 2021 “was approximately $2.39,” which is a sizeable $1.53 less than the Aug. 19 average he’s celebrating now. 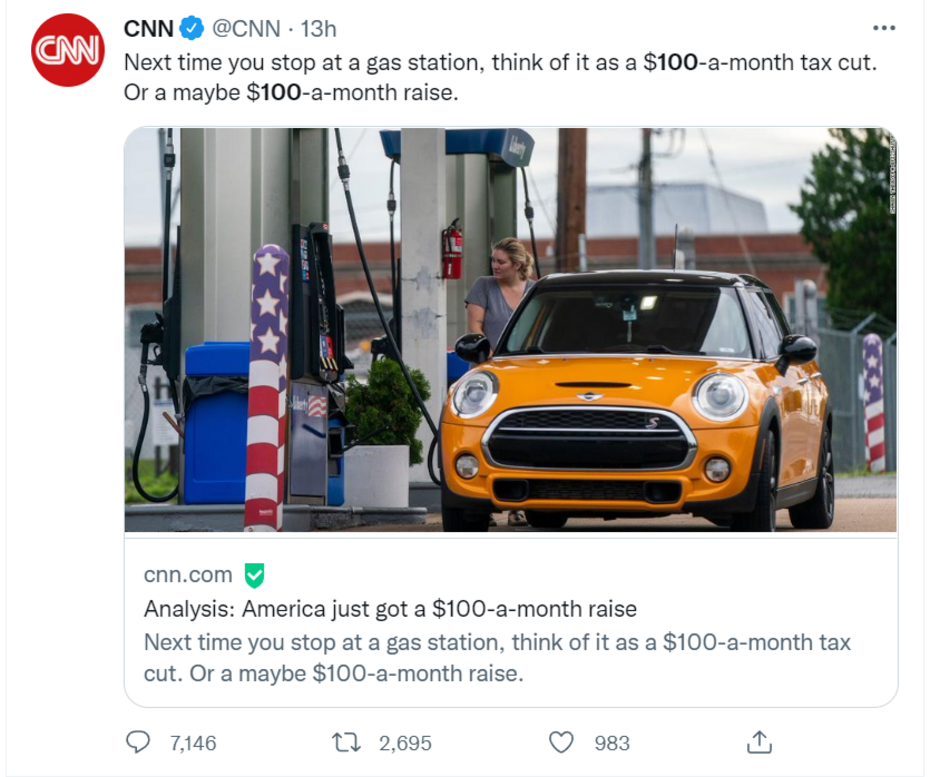 Sen. Ted Cruz (R-TX) fired back at Isidore’s absurd economic take on Twitter: “In the meantime — since truth still matters—gas prices are UP nearly 65% since Biden took office.”

In the meantime — since truth still matters—gas prices are UP nearly 65% since Biden took office. https://t.co/87xwbrKxR2

Isidore continued spewing propaganda that “[t]he impact of the extra cash could be a substantial boost to an economy that is showing signs of consumers pulling back on purchasing nonessential items, such as clothing, electronics and household goods.” As Republican Communicator Matt Whitlock pointed out: “@chrisidore if your employer slashes your pay $200 but then gives you $100 back are you calling that a raise?”

But, no need to fear too much about reports of recession, Isidore explained. He argued that “lower gas prices could help revive spending” on so-called “nonessentials” like “clothing, electronics and household goods.” Isidore also cited growing cracks in consumer spending on “nonessentials” at major retailers, which undercut his nutty notion that a slight dip in gas prices somehow translates to a supposed $100-a-month raise:

Major retailers including Walmart (WMT), Target (TGT), Best Buy (BBY) and Gap (GPS) are cutting prices on those items after consumers shifted to more spending on food and gas. And that pullback in consumer spending is one reason why many observers are now forecasting a recession, since consumer spending accounts for nearly three-quarters of US economic activity.

An IBD/TIPP poll from Aug. 9 revealed that a “solid majority of Americans —62 percent —” think the U.S. economy is currently in a recession, up from 58 percent in the prior month. It doesn’t appear that the American people aren’t buying the media’s ridiculous efforts to spin themselves silly to paint lipstick on the pig of Biden’s atrocious economy. But Isidore’s pro-Biden spin was arguably one of the most insane economic hot takes so far.

Conservatives are under attack. Contact CNN at 404-827-1500 and demand the outlet stop gaslighting the American people on sky high gas prices.

Video: Mother, teen daughter carjacked in their own driveway after handgun-toting crook apparently waited for them to exit Philly home early in morning
Mother Sells Her Six-Year-Old Daughter For Sex, Gets 23 Years In Prison
When the Washington Post Breaks Out ‘Both-Sidesism’ — Victims of Communism Museum!!
Drone Swarms Aren’t Science Fiction. America Must Meet This Threat.
Doocy EXPLODES After KJP Ducks His Abortion Question: ‘You Did NOT Answer My Question!’