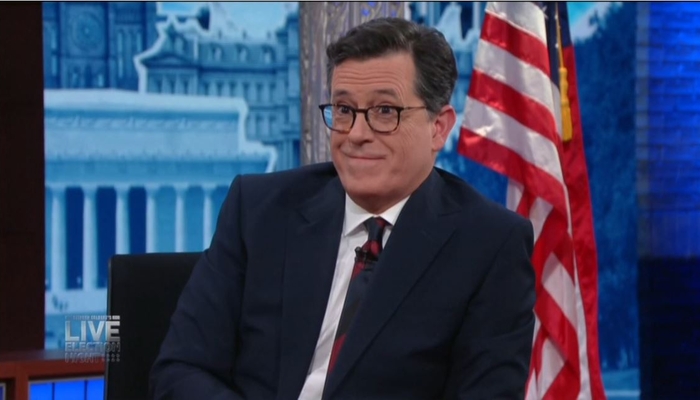 Stephen Colbert never really got over election night 2016. The “comedian” performed a live show on the night of the Clinton vs. Trump presidential election where he very publicly melted down as Hillary Clinton lost. Four years ago this week, he still hadn’t recovered. Being interviewed for the August 13, 2018 New York Times event TimesTalk, the Late Show host recounted that he didn’t even prepare for a Trump win:

We had four shows we knew that were possible: Mrs. Clinton wins and we know it, Looks like she’s going to win but we’re not sure, Donald Trump could win but we won’t know until the next day, and he’s definitely won. We had these [first] three, we had material for these three.

Asked about preparing jokes for a potential Trump win, he explained:

I’m not saying it’s impossible, if that happens it’s like I’m hosting a show in a slaughterhouse

Like emotionally, people are going to be so raw, that I don’t know what joke–its so disastrous, in my opinion, that I’m not sure I could dance on the edge of that volcano, anyway. Let’s just let the lava flow over us if that happens and we’ll improvise, we’ll see what happens.

[Our writers] didn’t want to write it….There was just no scenario in our head where that led to chuckles.

Want to see Colbert’s meltdown on the Showtime program? Here he is on November 9, 2016:

But right now, the election is too close to call and too terrifying to contemplate. The huge story is that Trump has outperformed expectations in early results. This one is a nail biter and a passport grabber. It feels like we are trying to avoid the apocalypse and half the country is voting for the asteroid.

Later, talking to Mark Halperin and John Heilemann, Colbert sputtered: “What the fuck is happening?!” Also this: “If Trump wins, how about bursting into tears and yelling ‘fuck’ for the next 45 minutes?”

For more examples from our weekly flashback series, which we call NewsBusters Time Machine, go here.