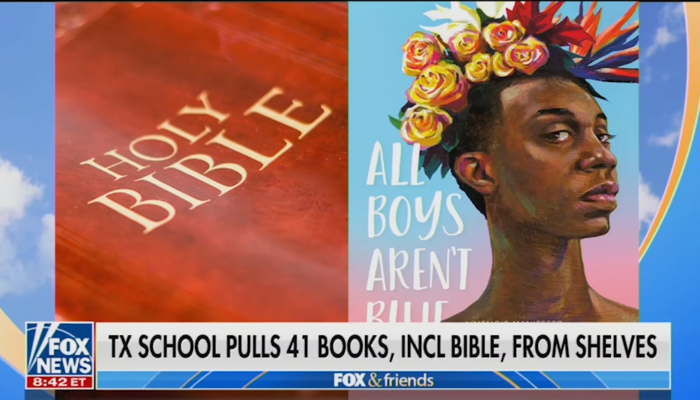 Just before the 2022-23 school year begins, Keller Independent School District of northern Texas has pulled dozens of books from the school library, among them are many LGBTQ books as well as “The Bible.” 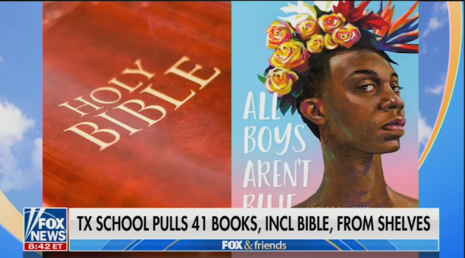 Three new conservative-leaning board members recently joined the Texas school district and sought a re-review of all books that were previously challenged. The list for review included over 41 titles and were removed for “explicit” content, according to Fox News.

Some of the titles worthy of removal were “Gender Queer: A Memoir” about man-on-man intercourse, “I Am Jazz,” about a transgender ‘female’ who began transitioning as a young child and “All Boys Aren’t Blue,” about queer black boys are all titles that have the potential to indoctrinate youth. Other challenged titles didn’t merit the removal they received including “The Bible” and “Anne Frank’s Diary (The Graphic Adaptation).”

It has become the “default” for books about queerness to outnumber copies of “The Bible” in school libraries as weekend host Pete Hegseth pointed out on Fox News Thursday morning. “’Bible’s’ out of the school libraries, ‘Gender Queer’ is in,” Hegseth said.

While it’s a shame and intellectually incompetent that “The Bible” has been pulled from shelves, Hegseth noted that at least the other books are also being “contested.”

I think this school district is signaling that they’ll let “The Bible” back in as just a reference book in the library. Imagine that, a reference book you could go pull out and read as a kid, certainly not gonna be taught in the classroom. But, this policy was put in place because of the absolute tsunami of gender theory, queer theory [and] critical race theory that’s entered into libraries at elementary, middle school and high school.

Hegseth is pleased that there is policy in the Texas school district where parents can challenge the books they think aren’t appropriate for their kids to have access to. Yet, he pointed out that with that policy, the woke, leftist, progressives will “use it as an opportunity” to get rid of things they don’t side with like “Anne Frank’s Diary” or “The Bible.”

The policy has potential, Hegseth mentioned, but parents and the board should be vigilant on the application of it.

If “The Bible” is out, then the explicit, left-wing books need to be out as well.

New York Times Admits That Hundreds of ‘Top Surgeries’ Are Being Performed on Children
Watch professional fishermen get caught cheating to win high-stakes tournament, furious crowd wants to tear them apart: ‘You should be in jail!’
Walt Disney World, Universal Studios Orlando to close parks as Hurricane Ian approaches Florida
Is Your Child an “It?”
New Amazon Device Tracks Breath Patterns While Sleeping